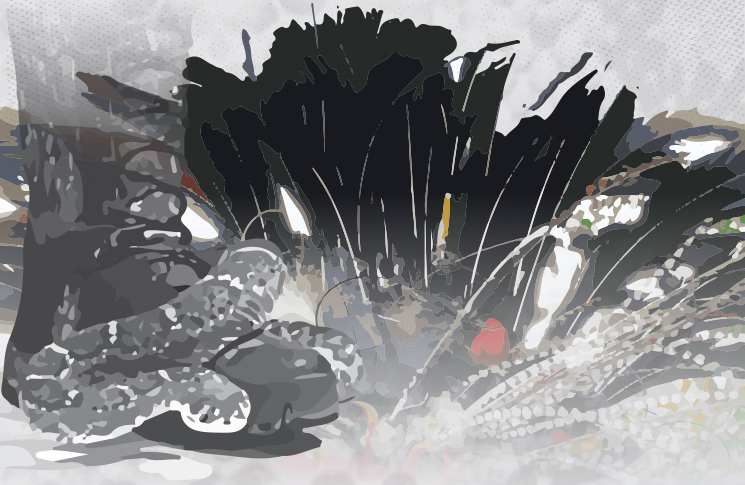 From 10,000 feet above Papua New Guinea’s Maoke ranges, the views were grand. Although higher mountainous terrain to the north appeared challenging, the young pilot was not required to tackle the dangerous labyrinth of PNG’s volcanic upthrusts, with their ski-slope airstrips that looked like Band-Aids from the air. Some of them were not much bigger when actually landed on, and were often surrounded by vertical cliffs that towered for thousands of feet in the steaming jungle heat haze. Today there were no passengers on the manifest, just parcels for delivery to the southern slopes of the Maokes, about two hours northwest of Port Moresby.

Cruising along, the pilot gloomily recalled his unusual charter the previous day, when he had picked up two native village chiefs and flown them to a gathering in the PNG highlands. Just before take-off he had discovered that neither grinning chief had ever flown before and, this being in the late 1960s, hadn’t even seen an aeroplane before. Airborne, after trimming out the Cessna 210 for the cruise, the pilot detected a foul smell emanating from behind him.

Today the cabin was fragrant again, after the live chicken episode, with the side air vents blowing hard; the pilot in harmony with nature and enjoying the peace and solitude. He stretched out into his ‘lounge’ mode and gazed down at the mountainous slopes to the north. Afternoon tropical turbulence launched its daily convection bumps, riding the Cessna up and down, gently at first. And then – he felt something move across his boots.

A rag? A spanner? The flight bag? No such luck. Peering down he spied a huge black snake lazily crawling across his boots, perhaps disturbed from its sleep by the turbulence.

No trivial matter, because many of PNG’s snakes are among the most venomous in the world –like the Papuan taipan, the Papuan black, or the greatly feared death adder. Death can be agonising or, if you are lucky, instant. This pilot was definitely a non-snake person who now had one tangled around his feet. Horribly worse than that was the nightmarish reality that he wasn’t in his comfortable room back at the base, where he could run outside and scream ‘Help! Snake!’ or ‘Somebody get it!’ No, he was suspended at 10,000 feet, trapped in a real-life horror movie with no Exit signs.

In shock and fear, an invisible force thrust him upwards in his chair, striking his head on the ceiling and then rebounding into his seat. His passenger reacted to this violence by sliding across the floor and becoming entangled in the rudder pedals. The pilot hurled himself into the right-hand front seat, shivering in horror. This flight had originally been ‘one POB only’ but now carried two living things: one pilot plus one stowaway, and each despised the other. A familiar voice shrieked: ‘So what do I do now?’ It was his voice. Okay, settle down. Think rationally. You’re a commercial pilot. Consult the flight manual – but exactly what manual will fix this?

Trying to sound cool, calm and heroic, his quivering voice spoke into the microphone, describing to Moresby Flight Service his dire predicament. They replied, ‘You sound terrified’, with the inference of, ‘We’d love to help, but what can we possibly do about it?’

Ignoring the squawking radio, the pilot stared at the horrible apparition with its long black tail trailing out from the rudder pedals. Then the snake moved, the pilot jumped up, and it moved again. With nowhere else to go, he simply flew into the back seats just as the hideous reptilian head appeared, its ghastly tongue flickering around the throttle quadrant.

‘The back seat!’, heart thumping. ‘What the hell am I doing in the back seat? I’m supposed to be the driver, aren’t I?’ Recalling yesterday’s events, he cursed the fact that he’d left the doors of the 210 open all night to rid the cabin of sacrificed chicken smells. The long, steamy night at Jackson Field had created a cosy residence for a wayward snake, probably enticed by stale chicken aromas. Up at 10,000 feet, the pilot was wishing those two tomahawk-wielding chiefs were back on board to save him from a Papuan death adder with little or no flying experience and which was now the pilot in command!

Numerous transmissions from FS kept requesting his intentions. ‘Well, what the hell would you do?’ he eventually yelled back at them. Unhelpfully, they responded ‘Do you have control of the aircraft? Confirm operations normal?’ The pilot didn’t like to tell them that he was squirming in the rear seats, the mike cord stretched to its maximum length, and that he was physically incapable of returning to the front row due to uncontrollable fear. Reality dictated he eventually had to return to the front seat and land this flying machine. ‘But I’m dead if I do and dead if I don’t’ he pleaded to the two eyes fixed warily on him.

Maybe this monster is harmless, he fervently hoped. Then again, maybe it’s not? Or maybe I’ll just kill it right now. But there was no knife or similar weapon to bisect this horrid slithering serpent. There had been yesterday; small, axe-like instruments with which the happy chiefs had prepared their culinary feast, but they were gone today –neatly cleaned away by him. Delving into his pocket he found a small ballpoint pen. Perhaps he could stab the snake 300 times with it? More likely, it would delete him from planet Earth.

Good news: the fuel gauges were merrily advertising near-empty, as they had been thoughtfully designed to do. Trembling, he felt between the front seats and changed to auxiliary fuel tanks, then adjusted the throttle, mixture and pitch levers. Punching the auto-pilot buttons, he set up a gradual descent, preparing for – what? A landing? But how?

He forced a grin: ‘A back-seat driver, eh? His dad had often joked about back-seat drivers. No probs: ‘I’ll just whip out the emergency checklist entitled How to land a Cessna 210 from the rear seats … ’ Apparently unamused, and easily within arms’ reach, two sparkling black eyes glared back at him.

The radio speaker relayed headings to an emergency landing field, assuming that the pilot had by now resumed ‘operations normal’. He most certainly hadn’t, but clear visibility ahead was the only bright spot on the horizon, as he was eventually able to spy the suggested dirt field by craning his neck past the snake.

Wrestling the plane towards a strip he had never been to, the radio pleaded again ‘Do you expect a normal approach and landing?’ He still couldn’t bring himself to admit that he was cowering in the second-row seat; stretched like an elastic band into the forward section, desperately trying to operate controls designed for front-seat drivers only. Again the request: ‘Do you expect …?’ but those evil eyes were just a metre away.

‘Normal?’ he laughed, ‘they absolutely must be joking!’ So, with much irony in the words final checks, the pilot switched off the autopilot, adjusted the power levers and selected gear down – unfortunately overlooking the elevator trim and flaps – understandable in the circumstances.

Finally, this pilot from Normal Airlines somehow managed to dramatically bomb his deadly machine hard onto the dirt airstrip, lurching and jolting, too fast, un-trimmed, flaps forgotten and with two POB, driving the entire flying circus from the back seat! With no access to brakes or rudder control he was powerless to prevent the Cessna from screaming off one side of the strip and into tall sugar cane. Eventually halted, the pilot was observed by startled natives to bolt from the right-hand door and streak into the cane field with almost missionary zeal. Later on, a snake would have dropped lazily from the same door, hissing ‘Thanks for the ride’.

What would you have done? I can only suggest that you never leave your plane’s doors open all night. The visitors could surprise you.