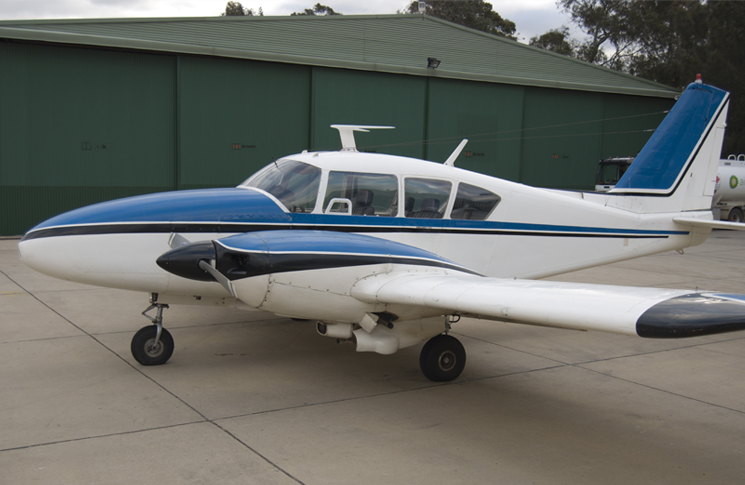 It has often been said that a pilot’s initial twin rating is the most risky undertaking in their flying career. This story will provide ample evidence in support of that theory.

I was only a 100-hour single-engine PPL when a cash injection allowed a visit to a small flying school, ‘guaranteeing’ a TR in two days for $1000. I was introduced to an Apache whose paintwork alone suggested that its performance might be just a little compromised. No matter, it was a beautiful day, and my youthful instructor was full of enthusiasm. The aircraft passed its pre-flight and off we went for an uneventful and very enjoyable first flight. After hours of C150s, the old Apache felt like a DH Mosquito! No single-engine work until the last twenty minutes, when the instructor demonstrated zero thrust, and I had my first taste of the foot forces required.

Lesson two was more of the same at altitude, but included a VMC demonstration, with a complete engine shutdown and restart using airflow. It was going well and the instructor decided on one more single-engine drill before heading back for circuit work. No problems-once again the engine was completely shut down, the prop feathered, and we began a descent.

‘We’ll do a single-engine approach and full stop landing as an introduction to the low-level stuff.’

It all sounded just fine at the time and our recovery to short final went by the book. However, that was where it all started to go very, very wrong.

I heard a call from the right seat of ‘Short final, *$*#, no gear! Go around, go around!’ I had already performed the downwind checks, and confirmed three greens gear down and locked, so I did hesitate momentarily. My man added full power on the live (right) engine and took over the controls, yelling, ‘Crank it, crank it!’

We proceeded very slowly down the runway at about 30 feet, with him flying, and me watching a propeller flicking over extremely reluctantly, and the engine not starting. My memory of the next few minutes is quite likely to be partially suppressed forever, but I’m pretty certain everything was forward by this time, so there was fuel. Not as helpful though, were full flap and gear down! (Yes, it was down!)

As low-level passes go, ours must have seemed interesting to bystanders. We were not gaining height but the ground ahead of us did rise. I can remember suggesting we ‘put it down’ while we still had runway, but the instructor elected to turn left away from the rise. The next few memories are a series of still images and sound bites in my head. A tree, the sight and sound of the upper twigs running past the canopy, a house, a dog … and then all was still after an incredibly soft impact on thick grass.

The next image is of the wreck, about 50 metres away!

The aircraft track through the grass suggested a large yaw angle on ground contact. We must have been very close to VMC – so any higher, and we could have rolled and impacted inverted. As I said, the gear was down, so our problem had been electrical, involving only the indicators.

Helpful people soon arrived and, after much headshaking, I was driven to a cheap motel for the night to be ready for the Authority investigation next day. Unhurt, but pretty shaky, I decided to shower and relax. Would you believe it, the shower tap labels were reversed, so my attempts to cool the water resulted in a scalded shoulder? I had survived the crash, only to be burnt in the bathroom!

What did I learn?

A zero thrust setting is safer than a complete shutdown at low level.

An old aircraft may not perform by the book.

A controlled forced landing straight ahead would have been better than pressing on and losing control, even if the gear had been up.