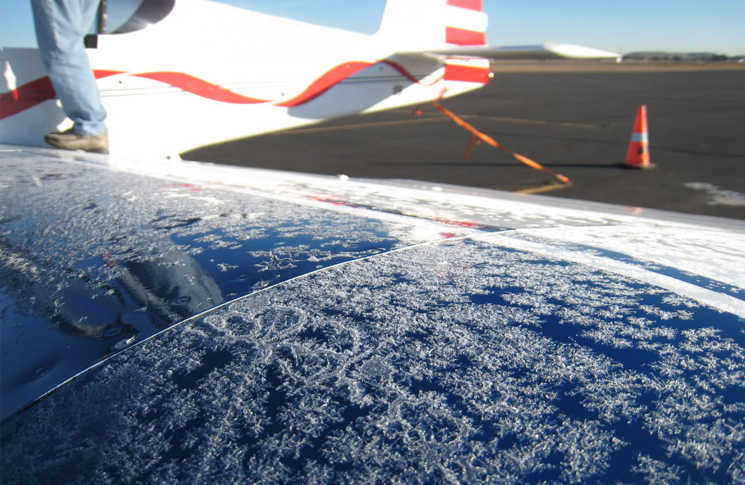 A few years ago, while living in the south-eastern United States, I decided it was time for an instrument rating. I had about 250 hours total from flying in Australia and the USA and thought the new rating would make me a more proficient, safer pilot. It was one of my first instructional flight shooting approaches, early in winter, but the weather was looking doubtful. There was always the chance of ice and snow in that region. The possibility of some actual IFR practice was very exciting, but after checking the conditions before leaving for the airport I had every expectation of having to settle for ground instruction. The instructor and I went through the preflight briefing together. There were icing conditions for sure, but above our altitude and to the east. No PIREPs available that were of much help to us. The CFII seemed confident we were good to go and I thought we would be only doing a couple of approaches to our own runway anyway. It was a well-lit 5000′ strip at the un-towered field, with a class C airport close by as an alternative. The workload for me, being an instrument student, was always high. This time was even more intense, being well aware that this was the real deal. No foggles needed, no clear blue sky for the CFII’s enjoyment. I had us westbound towards the IAF ‘EROVE’ at 4000 feet. At the IAF we would turn inbound for runway 18. I had not done a GPS approach before and was just getting comfortable with the too-good-to-be-true simplicity of it when the instructor commented, ‘We’re picking up some ice’, in a matter-of-fact sort of way. He was looking out of his window at the wheel. ‘Ice’ was not a word I wanted to hear in the air.

I glanced out to see a light dusting of white on the exposed tyre. Not much, and his seemingly unconcerned attitude gave me little reason for alarm. Did not have far to go, after all. We continued on the approach. I was eager for us to get to the inbound turn. I asked him what was happening with the ice, not wanting to take my eyes off the instruments to look out of the window. I was informed that ice was now accumulating on the leading edge. No longer just a dusting; the ice was now building up at an alarming rate. The instructor was still just sitting there, offering no suggestions when I asked for updates. It seemed he was happy enough for us to fly about and see just how much ice a Cessna 172 could carry. We knew the flat terrain well and cloud base was less than 1500 feet below, giving us close to 2000 feet AGL in visual conditions. I brought up the possibility of descending out of the cloud but his response was that we could not deviate from our ATC instructions. By then the windshield, leading edges and wheels had a good covering and it was still building up. I was not sure we were going to make it at that point and it was clear there was no help coming from the right-hand seat. I told him we needed to descend straight away and, calling ATC, said we were descending out of the cloud due to ice. They acknowledged and I increased my rate of descent to get clear of the clouds. I noticed the airspeed dropping. I added more power. Still more ice accumulating on the leading edge. Speed still dropping. Now at full power and the ASI indicating close to stall speed. Intense concern, but no reply to my comments on our power/speed situation. Finally, some input from the instructor, ‘Did you put on the pitot heat?’ Hell, no! How did I forget that? Of course the reason was being caught up with the ice, and flying on instruments I had overlooked solutions to our predicament. Carb heat was on; I added pitot heat and windshield defrost. At the same time I remembered the GPS with its ground speed glaring at me. It showed a much more comfortable number than the ASI but still, not very impressive for the amount of power I was using. With the pitot heat on, the ASI came alive. The windshield defroster was doing its best but the windshield remained totally covered with ice. We broke out of the cloud and finally the windshield began to clear, with sheets of ice breaking off, giving a clear view ahead. My relief was short lived though. The leading edge ice was hanging on. The big question on my mind was the new stall speed of our now-modified C172 wing. In the pattern for a conventional VFR approach, some of the leading edge ice was breaking off, but a lot remained. I informed the instructor that I would come in hot, at least 100 knots then 90 on late final, landing with partial flaps. I had no idea how much speed we really needed. I kept the speed up and the turns to base and final shallow and balanced. The objective of sure but precise flying seemed to matter so much more on that approach. The landing itself was uneventful; flare, float and wait for it to settle. One of my better ones, with the intense concentration I gave it. I have never been so happy to get on the ground.

After parking and getting out, still somewhat shaky, I spent an interesting few minutes pulling strips of ice almost a metre long off the leading edge.