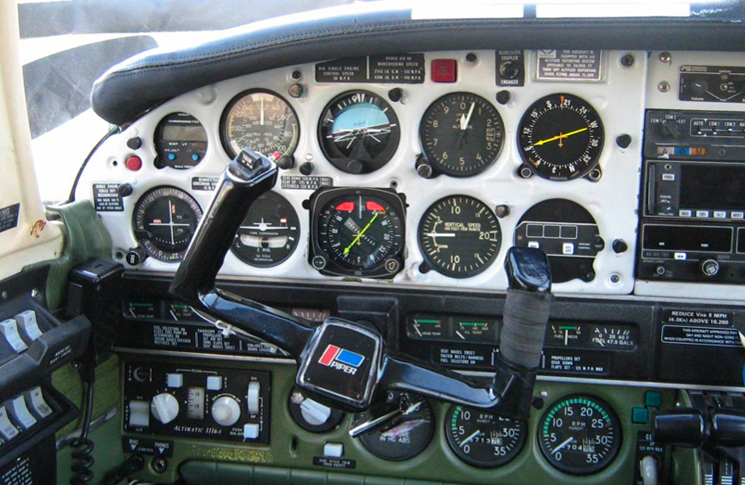 In the mid-1980s, relatively early in my career, I was employed as a bank freight pilot, flying a
Piper Seneca. Eight sectors a day, three days a week, had afforded me a high degree of familiarity
and comfort with the aircraft and its operation. As I began another routine day, I had no idea how
that very adroitness would almost lead to disaster.

After fuelling the Seneca and giving it a quick pre-flight, I ran the two Continental engines to warm
them in readiness for a quick departure. While supervising the loading of the bank bags and some
small parcels, as well as a few bundles of newspapers for the country towns, I completed the
manual load sheet. By 6am I was taxiing for runway 04. Remaining on schedule was of great
importance to the company, and after completing engine run-ups and magneto testing on the run,
Brisbane Tower cleared me for take-off into a beautiful spring morning.

Although filed under IFR, the weather remained VMC for the whole trip and, after four uneventful
sectors, I arrived in Charleville at 9am. My routine here always included a visit to the flight service
office for a chat with the staff, and to deliver them a copy of the day’s newspaper.

After lunch, and feeling well rested, I was back in the flight service office by 3pm to file the plans
for my return to Brisbane.

South-east Queensland remained fine and warm, and after refuelling and loading, I was on my way
home. The return routing was slightly different from the morning. First stop was Roma, before
making pick-ups in Dalby and then Toowoomba.

The sun was just setting as I completed the last of the day’s sixteen engine starts and, slightly
behind schedule, quickly taxied the Seneca for departure from runway 29. Toowoomba sits on the
edge of the Great Dividing Range at an elevation of just over 2000 feet, and with the outside air
temperature still at almost 25 degrees, the density altitude was close to 3800 feet. With the
aeroplane full of freight, the Seneca wasn’t far off its performance limit for the 1100 metre
runway.

The Seneca’s landing lights are mounted on the nose gear and would normally be switched off
automatically by a micro-switch on gear retraction. On this particular aircraft, however, that
switch was unserviceable, so lights off had to be manually selected as soon as the gear was up, to
avoid overheating the lights’ filaments once they were retracted from the cooling airflow. I had
just completed that procedure when, at a little over 200 feet, the left engine abruptly failed.

After a brief pause generated by the startle effect, my training kicked in. A bootful of right rudder
kept the aircraft straight and wings level. I did my best to maintain the blue line on the AS I.

Mixture up, pitch up, power up…gear up, flap up. It was all just like my instrument rating
renewals, albeit without someone sitting beside me closing a throttle lever. Dead leg, dead
engine…confirm and feather.

The Seneca struggled into the night sky at little over 200 feet per minute, and as I checked clear
left before starting the turn for my return circuit, the sight of the feathered propeller caught my
eye for a moment. ‘Not something you see every day’, I thought.

I was just about to key the mike and make a Pan call to Brisbane Flight Service to inform them of
my situation, when I noticed something very odd about the Seneca’s electrical panel at my left
elbow. The plastic cover guarding the magneto switches on the top row of the panel was lying
limply below them (the spring holding the cover in the guarded position must have broken after
the last start), and the blood drained from my face as I realised the two switches for the left
engine were off. With the magneto controls exposed, I had confused them with the landing light
switches one level below, and shut down a perfectly good engine just after lift-off.

Reselecting the magneto switches to their correct position, sliding the pitch levers to full fine and
the mixture to rich, helped the engine to roar back to life.

I re-established the Seneca in a normal climb and gave my departure report to Flight Service.
To say I was preoccupied during my homeward leg by the stupidity of my actions would be an
understatement.

It would be many years before I would be able to discuss this self-inflicted incident with any of
my peers.

On closer reflection, I suppose that the design of the electrical panel played some role in my error.
The magneto and light switches on the Seneca are identical in size, shape, colour and number, and
are in very similar positions. Only a small spring held the guard over the engine controls in place.
However, it was mostly my lax attitude to task that had caused me to misidentify the switches. I
am certain that this attitude was born out of the constant repetition of the same actions on a daily
basis. It is ironic, I guess, that while repetition can make us highly adept and comfortable with the
demands of flying, it can also lead into territory where we become over-confident and
complacent.

My career has progressed onto larger, faster aircraft but whenever I feel myself becoming a little
too familiar with their operation I think back to that close call in Toowoomba.