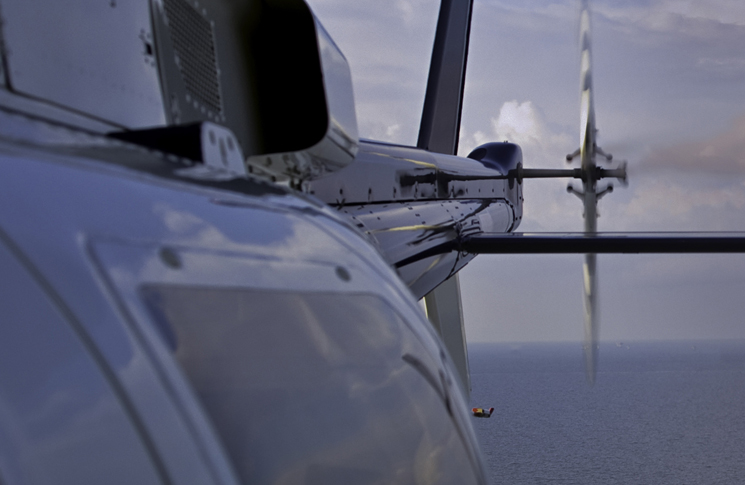 I started flying when I was fourteen. My goal echoed that of any young pilot at any flying school around the world who had been bitten by the aviation bug—work my way up to flying the biggest aircraft I could to the furthest reaches of the Earth. However, after eight years flying aeroplanes my goals were turned on their head after I experienced my first flight in a helicopter. I was awestruck! The freedom of landing and taking off from anywhere, no wings, no runways, hovering … I was hooked! I signed up to a course and after two years I was a fully qualified helicopter pilot working in south-east Queensland.

In 2008 I had finished my training on the Bell 206 Jetranger and was keen to get out and use my new qualification on an all-powerful turbine helicopter. An early opportunity came in the form of an air-to-air photography job. The job seemed simple: follow three aircraft around the ranges, filming them for a training video for the government. I had another pilot on board to handle the filming, an ex-helicopter instructor with thousands of hours on the Jetranger, who was now off flying light jets for another company.

The day was beautiful. CAVOK was forecast throughout, with light surface winds. The area forecast mentioned that the winds would increase in strength quite sharply with height but it wouldn’t be an issue as most of our work would be at low level. We departed from the airfield behind the three aircraft and the task went exactly as planned. After thirty minutes of filming, the last sequence involved the three aircraft landing in a pad together and then departing for lunch at home.

The cameraman told me to get up to 1000 feet AGL and hover in place so we could get a better view of the activity. I manoeuvred the helicopter into the spot and waited for the aircraft to do their thing. After only about a minute of hovering my whole world suddenly fell apart. I felt a strong gust through the open door and the aircraft immediately started to turn to the right. I applied left pedal to keep the nose straight, but it was taking more and more pedal to keep straight. About a second too late, I realised that I had run out of pedal but the aircraft was still turning right!

At that point the aircraft had turned thirty degrees and was accelerating its rotation. After about another second, it was acting like an out-of-control rodeo bull, my windscreen was a half blue half brown blur, and I had no yaw authority left. My only reasonable option was to get some forward speed and fly out of the spin, so I jammed the cyclic to its forward stop and lowered the collective. My windscreen was now full of trees and drought-bare Queensland hills. If this didn’t work the only way left to oppose the rotation was to shut down the engine and enter autorotation—something I didn’t fancy in the slightest at this early a stage in my career as a helicopter pilot.

After what felt like a lifetime the aircraft gradually started to respond and the forward speed crept up slowly. As it did the aircraft ceased its out-of-control spinning and dished out of the dive at 250 feet AGL.

As I climbed the aircraft back to height I had to fight to regain my situational awareness. I established us clear of the other three aircraft and checked the helicopter’s systems, which fortunately looked just fine, then asked my passenger if he was OK. He told me that he was, adding that he had caught a chance glimpse of the torque gauge during the initial onset of the rotation and it had been indicating an over-torque. The density altitude (DA) we had been hovering at obviously required a higher-than-usual power demand. My addition of full left pedal and extra collective had resulted in a minor over-torque.

I informed the other three pilots what had happened and landed in a paddock to have the helicopter inspected prior to returning home. While we waited for the engineers my passenger and I debriefed the incident. We both thought LTE (loss of tail rotor effectiveness) was a probable culprit. We were only at 1000 feet AGL but the density altitude was significantly higher, the wind was gusting and veering at height, and we had full fuel and crew. The power demand on the aircraft in the hover would have been quite high. Even though the aircraft remained undamaged I was upset with myself for putting it and us in such a vulnerable position. The whole scenario could have been avoided by flying a slow-speed orbit, but I had invested too much confidence in my ‘all-powerful turbine machine’.

The lesson I took away from that day was very simple—you are taught basic airmanship techniques (nose into wind, know your performance, watch your power etc.) for a reason. Imagining your aircraft has the power to overcome poor decisions is a mug’s game.

I was lucky we had height that I could trade for enough speed to fly out of the rotation. After reading many accident reports since then I realise that a number of Jetranger pilots have not been as lucky.