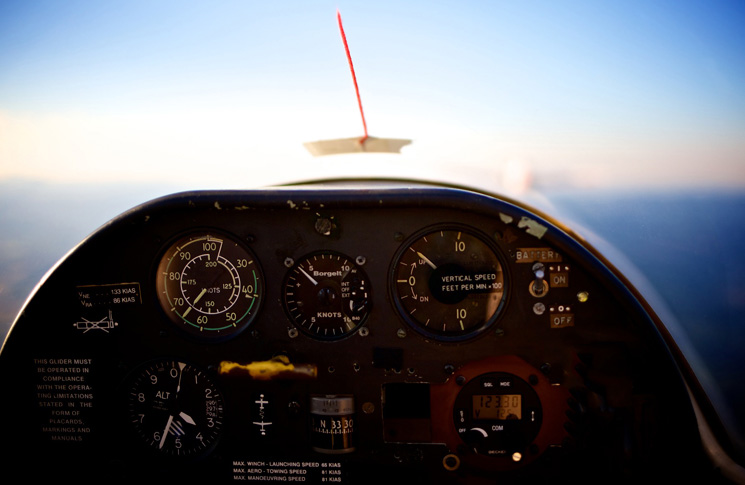 I had flown a Cessna 182, along with three friends, to a nearby glider field, so we could all have some gliding experience and enjoy the hospitality of the gliding club for a few hours. This wasn’t the first time, so I was well versed about the extended time on the ground and the extra ground handling tasks while waiting for your turn to go flying. Gliding is a very labour-intensive exercise, and probably requires more patience than many people expect. However, I eventually got a couple of flights in, as did my friends.

The glider being used for training flights that day was the LET13 Blanik, and the club had essentially given us sole use of the aircraft and one instructor for the day, as other flying was mainly being done in the single-seaters. For aero-towing duties, the club had an old Piper Tri Pacer, with barely enough power to launch the Blanik, but that only added to the training value of the exercise! With the Blanik and several single-seaters flying, the Tri Pacer was kept fairly busy for most of the day, only stopping for fuel and a brief rest at lunch for a BBQ.

My group had decided to finish by around 1600, in order to leave us time to fly home and put the 182 to bed by a civilised hour, so at the appointed time, with no further flights likely for the Blanik, it was decided that I would go along for the final ‘hangar flight’ and take some photos at the same time. Since I would not be flying it, and it would essentially be just a launch, fly past and landing, I wasn’t even being charged for it. Win!

As we strapped in for the flight, Neville, the instructor, commented that it had been a great day, but he was glad this was the last flight because he was feeling quite fatigued. Essentially, he’d been in the seat all day, only getting out for lunch and a couple of toilet breaks. I gave it no further thought, although I too was suffering from the long day in the sun without enough water, so I knew how Neville felt.

The canopy was closed, towline hooked up, and wing-walker in place to launch, and off we went. I was happily snapping away with my Nikon, getting some quite good photos of the initial take-off run etc., so it only dawned on me rather late that we were taking much longer to get airborne and climb away this time. The tow plane had become airborne, then settled back to the ground shortly afterwards, seemingly with a power problem. However, it struggled skywards again, and managed to clear the boundary fence by about three metres, all the time with us hanging on behind just above his level as we also struggled to remain airborne. Clearly, something was amiss, but we had no real options available to get us back to the runway, so we stayed hooked up.

Eventually, the poor old Tri Pacer gave up the race, and I have a great photo of its main undercarriage splayed out at a rather flat angle as it bounced off the road alongside the airport perimeter. At the same time, the tow rope went slack as the tow pilot released us to climb away and circle back for a landing. We had almost nowhere to go, so quickly, Neville decided the road was the only place where we could reasonably land from this height and speed. He stood the poor old Blanik on its left wing in a desperate effort to line up with the road. By this time, the speed had washed off, and of course, the steep turn only made it worse, so we came crashing down onto the road, essentially wings level, but VERY hard.

After a very short landing roll, we came to a stop and Neville and I unstrapped and climbed out to push the glider off the road and away from traffic. Fortunately, there were no cars on the road when we ‘landed’ and none came along for the next 15 to 20 minutes.

While we waited for a couple of club members to bring a vehicle over and tow us back to the airfield, Neville and I were busy trying to work out just what had gone so horribly wrong. Obviously the tow plane had trouble getting us airborne and climbing away, so our initial thoughts were that he had some kind of engine problem, but he’d managed to get back to the runway after a normal circuit, so perhaps that wasn’t the problem after all? Then, I saw that our spoilers were extended fully and commented to Neville that in the short time available he had done well to get them out for landing, but wouldn’t flaps have been more useful? His response-that he hadn’t deployed the spoilers at all-made us realise … we now had the answer to the performance problem!

We discussed the spoilers for some time, but neither of us could remember seeing them extended before take off, so they must have been retracted, but the handle not properly latched. The take-off bumps and rattling had presumably moved the handle just enough to make the spoilers extend, and suddenly the tow plane had a much greater load to haul airborne. Given that it was a little marginal in power for towing the Blanik even under ideal conditions, the extended spoilers had caused enough drag to prevent climb. He had just enough power to get us to the scene of the accident …

A simple mistake to make, and one he wouldn’t normally have made I’m certain, if Neville hadn’t been pretty much in the seat for five hours and clearly fatigued. We shouldn’t have flown that last sortie-only saving the small effort of towing the Blanik back to the hangar behind a car. Instead, we had bent metal. It could have been much more serious if there had been traffic on the road, or any one of a number of other things had gone just a little differently. We had been very lucky to survive with no injury to anything except pride. However, the Blanik didn’t fly for the next few months, while it was repaired.

Since then, there have been many times when my work day has been extended, or I haven’t had enough rest the night before, and I’ve had cause to reflect on the insidious nature of fatigue. We often don’t realise that we are even becoming fatigued until it’s too late. Flight and duty time limitations are in place for a very good reason, but we can still become fatigued while working within those limitations, so they are only a guide anyway. Certainly, I’ve become much more aware of my own levels of performance degradation with increasing fatigue. In my case, it seems to begin with my radio calls becoming more sloppy and poorly planned. My next symptom is a general lack of maths ability, when even simple calculations of time intervals, or fuel remaining, take more effort. Of course, others’ symptoms may be different, so all I can recommend is you watch for the insidious signs of fatigue and try to spot if your performance is degraded. If it is, you need to shorten your day, or get some rest. Know your symptoms and don’t fly fatigued.