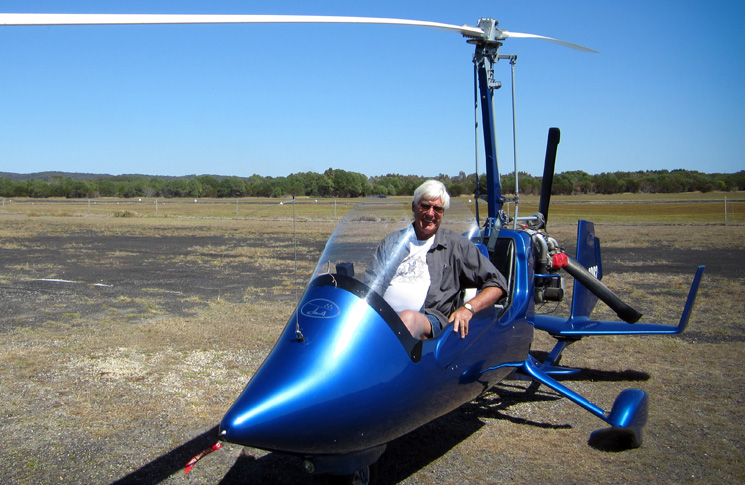 An experienced fixed-wing pilot underestimates the subtle differences between aeroplane and gyrocopter handling.

It was going to be easy to learn to fly a gyrocopter; I had flown fixed-wing for over 50 of my 68 years and had knocked up almost 2000 hours in a variety of Chipmunks, Cessnas, Pipers and Mooneys. A rotating wing? No problem.

I had been warned it might be addictive and I duly became hooked on gyros on my first flight, with formal training starting about a month later.

The open-cockpit models attracted me from the outset. They were a bit like flying motorbikes, and as my wife Margaret had ruled out my hankering for a Harley … I looked at the MTOsport – the model flown by instructor Paul, but after comparing it with the Spanish ELA, Spain won out.

Most of my training continued with Paul in his MTOsport, powered by a non-turbo Rotax 912. I put in about 30 hours with him, and started to feel confident. (One of my surgical mentors used to say ‘Confidence is the feeling you have before you really understand what is going on’. How true that is!)

By the time I had done over 100 landings and take-offs, I reckoned I had cracked it.

After my gyro had been ordered I began training with Ian, the nominated ELA instructor, a very wise and experienced gyro pilot. The only problem was that his open cockpit side-by-side machine was tiny and powered by quite a small engine and I felt I was about to fall out of it every time we left the ground.

Finally the big day arrived, and lovely Pip arrived (She was named after my grand-daughter Peregrine, known as Pip). Pip was significantly more powerful than any of the gyros I had previously flown. She is powered by a turbocharged Rotax 914, but otherwise handled very like the MTO in which I had done the majority of my training.

I went solo with Ian in December after three and a half hours of dual instruction on a grass strip. My plan had been to put in a few hours of local flying, then set off on a 1600km flight home to northern NSW. Realising that this was a bit over-ambitious, I left Pip at Echuca for the Christmas break.

My first flight in January at Echuca was straightforward. There was a gentle 10-knot breeze straight down runway 17. I took off with no trouble, and spent an hour cruising round the region, and doing a few practice touch-and-go circuits at a nearby grass strip. No problems whatsoever.

Two days later, I set off to do it again, but this time it was a very hot day with virtually no wind, and I was almost in a ‘dwaal’ (dreamy, dazed, or absent-minded state) as I taxied out to the holding point of 17. This is what followed:

Having completed the pre-flight test and refuelled start-up was straightforward, except that it took almost 30 seconds before there was enough air pressure to activate the rotor brake.

I taxied out to the threshold of runway 17, and lined up on the piano-keys. With wheel brakes applied, I turned the rotor brake to ‘flight’, released the brake lock and, holding the wheel brakes on manually, depressed the pre-rotation button but got no response. I momentarily depressed the trim button, noted a response in the air-pressure gauge, and this time pre-rotation engaged normally.

I saw the initial early needle jump in revs as rotation commenced, then the gauge settled down and revs increased steadily to 100, 150 and 200rpm, and I saw the rotor blurring. As I approached rotor 200rpm I increased engine revs to 3000rpm, still holding the aircraft stationary with the manual wheel brake. At 200 rotor rpm I released the pre-rotation button (at least I am pretty certain that I did) and the wheel brake, moved the stick fully aft, and increased engine revs. In retrospect, I could inadvertently have applied more power than was ideal.

I definitely observed rotor revs increasing to 250rpm during the pre-take-off roll. Almost immediately afterwards there was a loud bang and much clattering and the craft veered off the runway to the left, possibly hitting a marker cone on the grass. I reduced power to idle, and the speed decreased. I saw the starboard wheel lifting up, so I steered to port in an attempt to avert a roll-over, and the craft came to rest upright in the grass on the left side of the runway with the engine still running. I did not notice any unusual nose-high attitude while all this was going on, but cannot rule it out.

I taxied back to the hangar with an ominous droop to the rotor blades. The handle had broken off the control stick and one of the instrument gauges on the control panel had broken, but there was no apparent damage to the engine, the propeller or tail.

Further inspection revealed the main frame of the craft was deformed, the nose wheel assembly was broken, and the control system and mast were badly distorted. Poor Pip would need almost a complete re-build.

I dislike unsolved mysteries, and it took a while and many discussions with other pilots and instructors to arrive at a logical explanation for what had happened. Blade-flap (hinging) should not be possible at rotor 250rpm due to the centrifugal force acting on the rotor, and it is also not possible for the rotor to hit the runway behind the craft without damage to the tail or propeller.

It was not blade flap, but what was it? Could some form of mechanical failure have caused this accident? Had there been reports of similar accidents to ELA gyrocopters?

Inspection of the runway showed a patch of five impact marks 175m from the runway threshold, to the left of the runway midline. Putting it all together, this is what must have happened—good old-fashioned pilot error.

From the threshold I accelerated too quickly and at the point of take-off I was travelling too fast. The gyro leapt about five or six feet into the air because I did not exert slight forward pressure on the stick and allow the craft to balance on the main wheels, with the nose wheel slightly off the runway. Just as suddenly the gyro descended. As a result of the impact, not only was the nose wheel suspension damaged but, critically, the sudden downward momentum of the aircraft caused the retreating rotor blade, which was descending in the teeter cycle on the port side of the craft, to be deflected even further downwards, where the initial impact of the rotor tip (travelling at 440km/h) with the runway happened. No wonder the rotor blades (which weigh about 40kg) were smashed, and the energy transmitted to the aircraft frame bent it quite badly.

The things most occupying my mind are: what combined to cause this to happen, and what could I have done differently to avoid it? Flying a light aircraft is inherently dangerous, and many people consider flying a gyro is suicidal. Like surgical operations, there are a number of critical moments during flying which are more dangerous than others, and I think my accident involved four of these moments.

The first was that I broke one of the golden rules of flying. I was fixated on the rotor speed gauge during the take-off run, and did not keep my eyes ‘out of the cockpit’, looking ahead of the aircraft. Another factor, I think, was the extra power of my gyro compared to the ones I had trained in. This amplified the handling differences between flying dual and flying solo due to the difference in aircraft weight. Third, the increased acceleration of the gyro on a sealed runway compared to a grass strip meant that things happened a lot more quickly, so less throttle was needed to achieve the same effect. The final factor was having virtually no headwind on take-off, compared with a headwind (of say 10 knots) that would not have allowed the aircraft to accelerate as rapidly.

I was fortunate to have three excellent instructors during my conversion, each quite different but very good in their own way. However, I still managed to miss all four of those important factors.