It’s the last thing you want to see when behind the wheel of a car – a set of ‘dangling Dunlops’ coming your way – at speed.

Runway incursions are a frequent inclusion in ATSB weekly summaries, with Airservices Australia estimating that 15-20 of them happen every week, with a growing number involving transport of the four-wheeled variety. Paradoxically, the culprits are often airport safety or maintenance vehicles.

Cars and four-wheel-drives aren’t always the first thing you think of when runway incursions are mentioned, with images of the Tenerife airport disaster, the deadliest accident in aviation history, killing 583 people on a foggy afternoon in the Canary Islands, quickly coming to mind. Many factors played a role on the fateful day, from the heavy fog to pilot error. But whether it’s two 747s colliding, or a near miss between a ute and a Cessna, one thing is common to many runway incursions – poor communication.

Airservices Australia say there have been serious runway incursions due to drivers not remaining vigilant to call signs and accidentally responding to radio communications from air traffic control (ATC) that were intended for other vehicles. When coupled with non-standard phraseology, human error and messages being accidentally over-transmitted by other users, ineffective communication can quickly lead to danger.

This was demonstrated in 2012 when an early morning visibility inspection at Perth airport led to a runway incursion, with a safety vehicle having a near miss with a Piper PA-42 as it came into land.

The table below, from the Australian Transport Safety Bureau (ATSB) report on the incident, shows how easily miscommunication can happen. 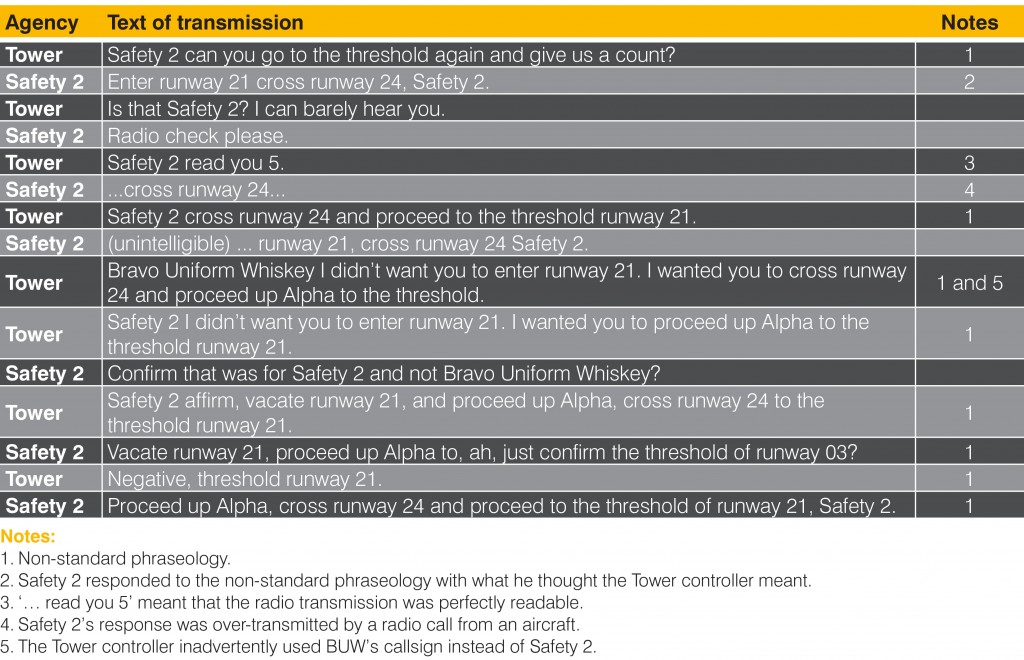 The ATSB said the incident is a reminder that ‘in safety-critical situations all radio communications phraseology should be clear, concise and unambiguous’ and that drivers operating on an airfield should ‘seek clarification of ATC instructions should there be any doubt as to the content or intent of the instruction’.

Joe Hain, a CASA aerodrome inspector and former airfield manager at Sydney Airport, says non-standard phraseology is spreading around Australia. ‘Unfortunately, evidence suggests that it’s becoming more common across the country,’ he says. ‘The use of non-standard phraseology could reach a point of “normalised deviation”— making formalised reporting very irregular and our job to understand safety trends very challenging.’

This ‘normalised deviation’ can be a simple ‘G’day mate’. While its general use in society might not make Aussie slang seem sinister, when used over aviation radios and in certain circumstances it could easily impact on safety, particularly for international pilots and others without English as their native language.

Good radio practices underpin effective driver/controller communications and are vital to safe aerodrome operations. The basics of a good technique include:

These points – coupled with knowing what you’re going to say, being concise and acknowledging all clearances – will help communication to be clear and accurate and will help protect you from those ‘dangling Dunlops’.

CASA encourages everyone who has heard non-standard phraseology to report it. This is not to dob in or rat on individuals, but to help authorities collect data on the occurrences so educational programs can be implemented to help raise awareness about this important safety issue.

You can report any safety incidents to your local aerodrome safety inspector, or by submitting an aviation security incident report (ASIR).