This amazing video captured from the deck of USS Bataan shows an AV-8B Harrier Jump Jet landing with the help of a makeshift stool, after the aircraft’s front landing gear failed.

The pilot, who had only just taken off from the amphibious assault ship, quickly realised he had landing gear malfunction and slowed the jet to avoid causing more damage. He radioed his Landing Signal Officer (LSO) who quickly identified the inactive front gear and installed a specifically designed stool-like device on the flight deck.

With no prior training, the pilot executed the landing on his first attempt before the flight deck crew rushed to his aid.

This remarkable feat of flying demonstrates the importance of teamwork, redundancy measures and remaining calm when faced with a mid-air emergency. 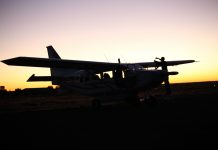