Home Feature My captain, my killer 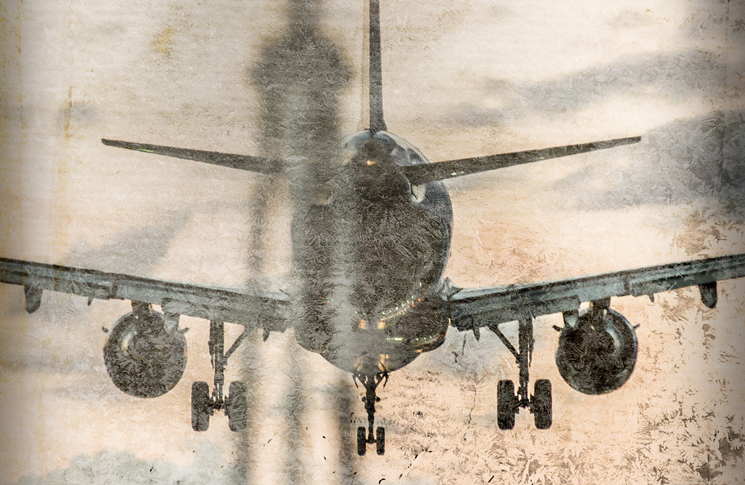 The first officer knew the approach was flawed, and he said so. But his deference to a captain who was fixated on landing cost him his life, and killed 10 other people.

On instrument approach to Resolute Bay, in northern Canada, a Boeing 737-200 Combi struck a hill east of the runway. All four crew and eight passengers were killed and the aircraft was destroyed by impact and fire. Three passengers survived with serious injuries.

The Boeing, operated by Bradley Air Services, took off from Yellowknife, Northwest Territories, on the morning of 20 August 2011 on a charter flight. On board, in addition to the crew, were 11 passengers and a load of freight.

During climb and after levelling off, the crew received weather updates that conditions were deteriorating at Resolute Bay and they discussed whether to return, divert, or continue. They finally agreed to continue.

Half an hour before their ETA, the crew programmed the aircraft’s GPS to proceed direct to an intermediate waypoint on the runway 35 approach at Resolute Bay, intending to transition to an ILS/DME 35 at that point. They began their descent 101 nm from their destination.

Five minutes later the first officer called Resolute Bay Control, reporting their ETA was 11.43 and that they would be making a runway 35 approach. The controller provided traffic information and instructed the crew to contact the tower.

At 11.38, when 600 feet above the glideslope, with the airspeed reducing to 184 kt, the Boeing began a left turn to intercept the ILS, reporting it was now on a 10 nm final. The captain called for the undercarriage to be lowered and for flaps 15 and the tower controller instructed them to report again at 3 nm.

But after the first officer acknowledged the call, he became concerned about the aircraft’s lateral displacement from the ILS track and over the next half minute, drew this to the captain’s attention no fewer than five times. Twice the captain responded by saying that the autopilot was tracking properly.

The cockpit voice recorder tells a story of mode confusion and crew resource management breaking down:

First officer: ‘Look at the track deviation displayed on the GPS – we’re not on auto approach, just on the flight director! I’ve got full deflection on my localiser!

Captain: ‘Why have we got full deflection when we’re on the localiser?’

First officer: ‘We’re not on the localiser!’

Captain: ‘No, I want to continue the approach.’

First officer: ‘We’ve got full deflection on the GPS now too! Correct by going left!’

First officer: ‘We do need to sort out how we’re tracking…’

The crew continued to argue about what the flight director, the GPS and the autopilot were really indicating. Engine thrust was increased a little.

Captain: ‘Flaps 40 – something like this happened to another pilot on this approach. What’s your glideslope indication now?

First officer: ‘Just over the shoreline – (captain’s first name) I don’t like this!!’

First officer: ‘Go for it! Go round!’

Seconds before 11.42am, as the Boeing was beginning to go around, it crashed into the hill one nm east of the runway.

Three minutes after the Boeing’s last transmission, the tower controller called to request its position. After two more unanswered calls, the controller decided the aircraft had made a missed approach and lost communications. But he put the fire service on standby and dispatched a vehicle to look for the aircraft.

At 12.19, as clouds obscuring the hill lifted to some extent, airport staff saw smoke and flames on the hill to the east of the runway. Rescuers found three surviving passengers – seriously injured, but sufficiently mobile to help each other clear of the burning wreckage.

Ground scars showed that the Boeing 737 had first struck the up-sloping shoulder of the hill on its main undercarriage with sufficient force to shear it and both engines from the aircraft structure. The aircraft bounced, becoming airborne for another 200 metres before striking the ground again beyond the crest of the hill, and breaking up. Fire damage was confined to the centre fuselage and wings.

The Boeing 737 was fitted with an SP-77 autopilot and dual FD-108 flight director systems. These systems functioned independently and were not integrated. Various mode selections enabled the pilots to command the autopilot to fly the aircraft on to a selected VOR or localiser course (VOR/LOC mode), as well as to make automatic approaches to runways equipped with ILS facilities (AUTO APP mode).

The pilots could also manually control the aircraft in control wheel steering mode (CWS) without disengaging the pitch or roll axes of the autopilot system. Use of CWS did not disengage either channel of the autopilot system. The system was modified to allow for the use of GPS guidance and could be coupled either to the VHF NAV radio or to the GPS.

Independent flight directors were installed for captain and first officer. The flight directors received inputs from the various navigation systems, depending on the selected mode of operation, and the attitude reference system provided inputs of aircraft roll and pitch attitude.

The flight directors processed these signals to generate attitude commands to maintain the desired flight path.

At 11.40, the first officer questioned the full deflection indication, and over the next 26 seconds, the pilots discussed the aircraft’s situation relative to the localiser. The first officer suggested they abandon the approach, but the captain chose to continue.

He later responded to the first officer’s ‘We’re on a three mile final – we’re not configured’ by calling for the remaining flap selections. Again, the captain continued the approach.

Procedural guidance for instrument flying in Canada requires that, during ILS approaches, a missed approach is to be made if full-scale deflection of the localiser occurs at any time on final approach before decision height.

The aircraft did not capture the localiser during the approach and progressively deviated to the right. As well, the approach was unstable in several parameters, and was continued beyond the point at which there should have been a go-around.

At 150 miles from Resolute Bay, the first officer pointed out their ground speed was high because of the tailwind component at cruising altitude. The descent began 101 nm from touchdown, closer than required, and resulted in the aircraft descending through 10,000 feet at 310 kt, well in excess of the 250 kt speed limit.

But by the time of the turn onto final approach, the captain had reduced speed to within normal limits. Even so, the aircraft was 600 feet higher than desirable. The flight directors probably switched from AUTO APP intercept to AUTO APP capture as the turn began, the autopilot sub-mode changing from VOR/LOC capture to MAN and HDG HOLD.

The captain’s request for the undercarriage came just after the first officer’s 10-mile call to tower and he missed the tower’s instruction to report again at three miles. The captain then called for flaps 15, and the first officer had to ask the tower to repeat the transmission.

Standard operating procedures required the pilot not flying to call ‘localiser’ when the deviation was one dot or greater from the correct track. However, as the aircraft was deviating one dot to the right, the captain called flaps 15, and the first officer missed making the ‘localiser’ call. As the aircraft continued its approach, now at 3100 feet and at an airspeed of 168 kt, the ILS indicator was showing 1½ dots to the right of the localiser and 1½ dots above the glideslope.

The captain’s HSI heading bug was found at 330 degrees, but the recorded heading was 329 degrees and it was probable that his flight director was commanding wings-level after reverting to AUTO APP intercept mode. This would have reinforced the captain’s view that the intercept angle back to the localiser was sufficient.

The HSIs had probably been indicating full-scale localiser deflection from soon after 11.39. Although the first officer pointed this out, he phrased it as a question, seeking confirmation from the captain. But the captain was still convinced the autopilot was in VOR/LOC mode and had captured the localiser. The captain also might have been expecting to become visual at or below 700 feet because of the way the Resolute Bay weather had been fluctuating.

At 11.40, the captain’s response to the first officer’s three-mile call was to request flaps 25, but only assertively presented, unambiguous information would have succeeded in changing his determination to land.

Soon after, the first officer told the captain that they needed to go left to get the aircraft back on the localiser, away from the hill. The captain responded that he could not go left. Because the aircraft was only three miles from the runway, he was probably reluctant to turn further left and increase the intercept angle, which could have resulted in overshooting the localiser to the left. Additionally, in AUTO APP intercept mode, his flight director was commanding wings-level to maintain his heading bug selection.

By 11.41, seconds after the final landing configuration was achieved, the aircraft was 0.67 nm to the right of the localiser centreline, and 1.5 nm from the runway threshold at a height of 720 feet above its elevation, and nearing the height at which the captain expected to break out of cloud.

When the first officer reported to the tower they were on a three-mile final the aircraft was actually 0.9 nm from the runway threshold. Seconds later the first officer called that they were ‘just over the shoreline’. But the aircraft was actually overflying the northern edge of a pond 0.7 nm south-east of the runway and this mistaken identification from a brief visual contact would have reinforced the captain’s expectation of becoming visual.

FDR data showed that the rate of descent increased to 1000 fpm by 11:41:40, with the airspeed increasing to 152 kt. As the aircraft pitched further nose-down to minus 5 degrees, the first officer uttered an expletive, no doubt reflecting his grave concern. The rate of descent then further increased to 1500 fpm, with the airspeed increasing to 158 kt only 310 feet above airport elevation.

By this stage the aircraft was abeam the runway threshold and 0.72 nm to the right of the localiser centreline. Calling the captain by his first name, the first officer made a final, personal appeal to break his fixation on continuing with the landing. In the absence of clear procedures allowing an experienced first officer to take over control, he must have felt he could do nothing more.