Australia’s newest airport has a safety story to tell before its first flight.

In a few days (on November 17) the first scheduled passenger flight to Brisbane West Airport, at Wellcamp, 17 km west of Toowoomba, will taxi up to a freshly completed terminal building.

Wellcamp, or YBWW in ICAO code, is the first new public airport to be built in Australia since Melbourne Airport was opened in 1970. It will have gone from blueprint to operation within two years.

Wellcamp is no bush strip. Its Code E Runway 12/30 measures 2870m x 45m and is capable of handling a Boeing 747-sized aircraft, although initial plans are for airline flights using regional turboprop aircraft. Fly-in fly-out (FIFO) mining charters to the coal and gas fields of central Queensland would use similarly sized, or smaller aircraft.

The airport—privately developed by Toowoomba concrete and construction firm Wagners—draws on a catchment area population of 344,000 and is expected to create about 2000 jobs and an economic output of $318 million. However, it will not replace the existing Toowoomba airport.

Wagners chairman John Wagner sees an international future for the airport. ‘I think international freight could happen relatively early in the piece. And I think over time we could probably attract some international passenger traffic, particularly out of China,’ he says.

‘In particular, there are second-tier regional airlines there that have shown interest in operating internationally into regional centres in Australia rather than capital cities.’

Wellcamp will also welcome general aviation. ‘You could base your Jabiru here,’ Wagner says, adding that business aviation fixed-base operator (FBO) facilities are being built.

Making room for a new player

Wellcamp is the latest element in what is a busy patch of airspace, although not uniquely so. As happens with several other Australian metropolitan airports, it has general aviation, sport aviation and military aviation taking place nearby. Army helicopter flying takes place at Oakey; there is a gliding club at McCaffrey Field (west of Oakey), as well as general aviation operations from Toowoomba’s existing airport, and a RAAF base at Amberley 80km to the east. There are also a significant number of aircraft landing areas (ALAs) nearby, although many of these are infrequently used.

CASA’s Office of Airspace regulation has been involved in the airspace changes required for safe operation of Wellcamp. It has taken a precautionary approach to airspace safety by adopting the principles of dependency risk management. This involves hazard identification, risk assessment and mitigation designed to determine ‘what could go wrong’. One example is to recommend a right-hand circuit for Wellcamp’s Runway 12 to minimise the possibility of conflict with Toowoomba airport traffic by keeping Wellcamp circuit traffic always to the west.

The OAR study provides a list of possible threats, and proposed mitigations to ensure that the risks are sufficiently treated.

The OAR found: ‘The variety of activity within the airspace presents additional challenges to de-confliction because of the unique operational demands each activity has.’

However, the study also found trends and factors that favoured safe traffic growth around the new airport. A recent Defence department review of the Oakey airspace concluded that there was scope to rationalise its restricted areas and relinquish parts of them that were not used regularly. These changes to the Oakey and Amberley restricted areas and danger areas came into effect on 29 May 2014.

The OAR study also found that of the 248 airspace-related aviation safety incident reports submitted to the ATSB for locations within 50 nm of Toowoomba below 10,000 ft, few concerned the airspace near Wellcamp.

Airport safety is about much more than airspace. Indeed, it is about more than aircraft. Passenger flow, ground handling, baggage handling and the vague-sounding but essential ingredient of safety culture all play a part.

‘From a safety perspective we’ve got an ideal site,’ Wagner says.

‘We’ve also built the airport strictly in accordance with CASA’s manual of standards, which I think is there for a good reason.

‘I don’t have any issue with those standards.

‘The advantage we’ve got here is that there are no houses underneath the flight path of runway 12. There are 13 houses within three km of the airport, and we own the majority of them.

‘There’s room not only around the airport, but also on it. We have built a large apron, so aircraft can manoeuvre without getting in close proximity to each other. And if we need to we can continue to expand the apron—we’re in the concrete business after all.’

The terminal—designed by the same architectural firm that designed Canberra’s new airport building—also separates incoming and outgoing baggage streams. ‘That’s a big safety factor that’s also an efficiency factor. We need to be a low cost airport with a rapid and efficient turnaround,’ Wagner adds.

He says the construction business has taught his family company that safety and efficiency go hand in hand.

‘If we let the safety ball drop we’re out of business,’ he says.

‘We have a very strong view that everyone who works for this business—or every subcontractor—is entitled to go home in the same condition they came to work.’

The company practises what it preaches by making safety the subject of the first two hours of every Wagners’ board meeting.

‘We get our senior management teams in the room—about 30 people. For the first two hours, when everyone’s fresh, safety is all we manage: it’s item number one,’ Wagner says.

As of September 2014, the airport construction project had achieved a benchmark of zero for loss of time injuries and medical time injuries.

Wagner is quietly confident that the company can operate the airport to similar standards.

‘A lot of people said to us when we went into the airport business “there’s a lot of regulation”,’ he says. ‘Well, there is, but it’s no different to major oil and gas projects around the world. That’s in our psyche; it’s in our culture. You can’t run a project like this without that sort of culture, otherwise you end up hurting people.

‘If you work on Exxon projects and Shell projects you can’t afford not to be up there on safety. The reality is when you go to bid for those jobs the first thing they look at—in fact they audit it—is your safety record.’ 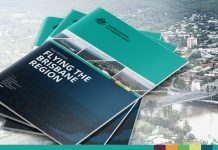 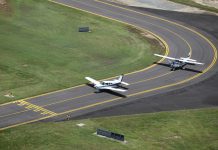 Watch out for debris at airports