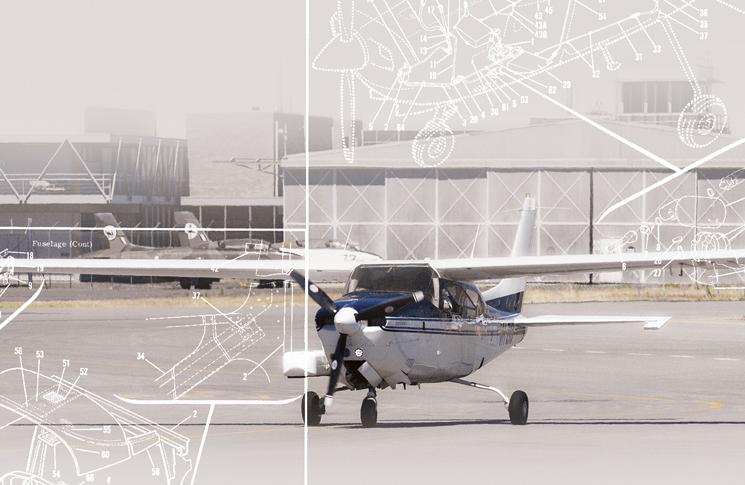 If you own or fly Cessna’s popular 210, you need to take a closer look at its wing spars.

Next year is 2015, the year Marty McFly and the Doc visit in Back to the Future, Part II. The 1989 movie portrayed a future of self-tying shoes, wheel-less hovering skateboards and flying cars. Alas reality is not so glamorous: instead of time-warping Deloreans, general aviation depends on many of the same types—or the very same aircraft—that flew in 1985.

An example is the Cessna 210 Centurion. It ceased production three years before the movie was made, but many are still in the sky. Understandably so, for its combination of performance, load capacity and benign handling is as appealing as ever. But every Centurion is at least 28 years old. The problem is these aircraft have had a longer future than was imagined when they were made. They have lasted well, but they are getting to a stage where close inspection is required to prevent serious or catastrophic failures.

In April 2012, Cessna received five reports from Australia about Cessna 210s detailing cracking in the wing spar. These 210s ranged from a (relatively) young 27-year-old to an elderly 39-year-old aircraft. In each case, severe cracking had occurred in the single main wing spar. This led the US Federal Aviation Administration to release an emergency airworthiness directive mandating an inspection of the lower wing spar cap to determine the spread of this problem. As a result of the mandatory inspection, two more instances of cracks were found in the 7000-plus Cessna 210 world-wide fleet.

The cause of this cracking was metal fatigue; a phenomenon present in all metal structures, not just aircraft which subjected to repeated and/or cyclic stress loads which can be considerably less that the yield stress for the material i.e. the force required to actually deform the metal. Fatigue cracks usually originate from tiny flaws, areas of damage or micro cracks present in the metal at manufacture. Some of these flaws can then grow into fatigue cracks as a result of normal flight operations.

As an aircraft transitions from the ground to flight, the load on the wing transitions from that of an unloaded structure to a loaded one. This is due to the lift generated by the wings now subjecting the wings to flight stresses (which are different to the normal stresses when on the ground). This results in the equivalent of a slow motion ‘flapping’ action of each wing, which can cause significant up and down deflections in the wing tips—repeated with every flight.

Over the years, this continued cyclic loading accumulated through normal flying activities, combines to grow the initial flaw in the metal into a progressively longer crack, directly proportional to the number of cyclic loads applied.

Anyone who has ever tried to unbend a paperclip knows that initially, the metal resists the temptation to bend to your will, but slowly the paperclip becomes less resistant and bends more and more until it catastrophically fails and snaps. The job of the design engineers is to make sure fatigue happens later rather than sooner: ideally it should not be a problem until after the normal lifetime of the product. For the Cessna 210 and its contemporaries, it was envisaged the operating life of an aircraft would be about 20 years. However, the aircraft market behaved differently and aircraft such as the 210 continue to be operated beyond the originally envisaged design life.

An interesting and dangerous characteristic of metal fatigue is that crack growth increases exponentially with the size of the crack area. When a small crack starts, at first not much happens, but when things happen, they happen quickly. The destruction of the de Havilland Comet airliners is a case in point. The implication is that visible cracks are in most cases too dangerous to fly with: they might result in total component failures at any time.

It is an unwritten law that as the age of an aircraft increases, so too do the maintenance costs for that aircraft also increase. That is just a fact of life. This is not to say that that aircraft cannot be flown safely beyond their designed life. There are warbirds more than 70 years old still doing aerobatics, after all. But as impressive as that seems, it comes at a cost—a systematic and comprehensive maintenance program. Warbird operators know that as an aircraft surpasses its design life, age fatigue and corrosion need to be accounted for with updated, approved inspection and maintenance processes. Cessna’s supplemental inspection documents (SIDs) are another example of these processes.

As of 14 April 2014, Aviation Ruling—Compliance with Supplemental Inspection Documents clarifies the legislative requirement on the implementation of supplemental information to assist with continuing airworthiness. In particular this document sets out the times by which registered operators of Cessna 100, 200, 300 and 400 series aircraft must comply with the Cessna SIDs.

If you own a Cessna 210, you will still be able to fly your aircraft. The SIDs which look at the lower wing spar cap, if implemented into a proper maintenance program, will allow your aircraft to continue flying safely for up to 30,000 hours. It is a case of ‘do your inspection and get back to the future’.