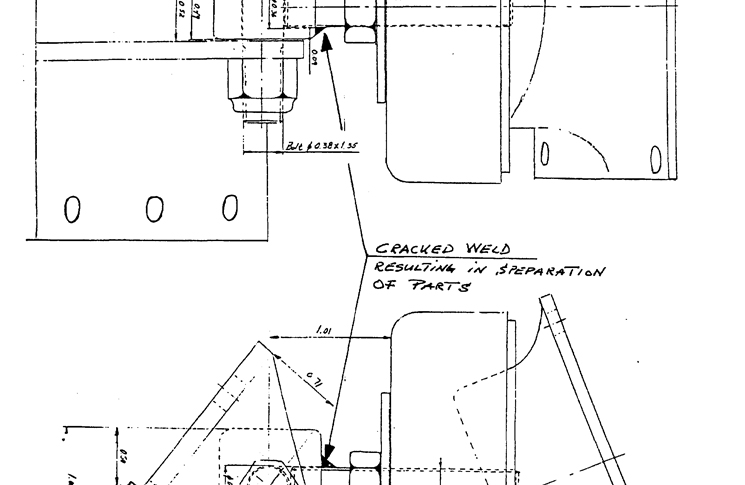 Adrian Park investigates the cold reality of aviation—how one incorrectly installed or incorrectly manufactured mechanical part can bring an aircraft crashing down.

There is a well-known, proverbial rhyme originating sometime in the 14th century:

It is doubtful the 50 passengers and five crew aboard Norwegian Partnair PAR 394 were mindful of this medieval rhyme as their Convair CV 340/580 taxied for departure—but soon, tragically, they were to illustrate its lesson.

The aircraft’s scheduled departure time from Oslo on 8 September 1989 was delayed after the co-pilot—who was also the company operations manager—had to convince the catering company to let the aircraft depart with an unpaid bill. If only that was the worst of his worries. The aircraft, despite being out of heavy maintenance only a month before, was experiencing ongoing starting issues with its number two engine as well as a failing number one generator.

Unexplained vibrations were also becoming more prevalent. The technical problems had become so regular the crew had been allocated an aircraft mechanic to fly with them and assist with the ongoing defects. On the day of the accident the generator again failed prior to take-off.

The crew, consulting an out-dated and essentially irrelevant minimum equipment list (MEL), started the auxiliary power unit (APU) in lieu of the failed main generator. The intention was to use the APU for the duration of the flight. The flight manual, also out-of-date, only allowed such a practice in the case of in-flight failure. Investigators later found the practice of using the APU generator in flight had become normalised within the company.

The flight data recorder showed the aircraft took off with a failed generator, the APU running and ever-increasing vibrations. Post-mortem data showed the vibrations were not yet of sufficient concern to prevent a light meal being served.

As the aircraft climbed out, the APU began to oscillate dangerously around an excessively worn support strut. The strut was later to be found of ‘unknown origin’ and should have been replaced in heavy maintenance a month prior. The vibrations from the APU began to resonate with an already vibrating tail empennage. Four large retention bolts holding the tail in place were also excessively worn, allowing the tail and its control surfaces to shudder violently in resonance with the APU. These bolts should also have been replaced in the same heavy maintenance period a month before.

Abnormal vibrations are usually a warning, but for Partnair 394 the vibrations had been present on so many flights the crew were impervious to their metallic cautions. No one listened. A ghastly sequence of events began to unfold. The oscillations of the APU around the non-genuine strut continued to conspire dangerously with the tail empennage vibrations. These became ever greater as Partnair 394 reached its cruising altitude of 22,000 feet. While the passengers ate their meal, the vibrations were beginning to cause the elevator and rudder control surfaces to flutter violently. Suddenly the shroud doors between the fin and the rudder were torn off. High velocity air—rushing through the gap—acted as an aerodynamic lever for which the worn retention bolts were no match: the bolts simply snapped and the entire tail section, now severed from the fuselage, began its long fall to the ocean seven kilometres below. The loss of the tail meant a sudden shift in the aircraft’s centre of gravity and a violent ‘negative g’ moment slammed the nose of the aircraft downwards. High-grade aluminium sheared at the fuselage and the wings were torn completely off. The fuselage came apart, scattering itself and its contents across a dozen square kilometres of ocean floor.

A modern rendering of the rhyme in the context of Partnair 394 would go like this:

Of course a more comprehensive rhyme would include the ‘want’ of at least a dozen other ‘nails’ such as adequate maintenance procedures, properly completed work cards, an accurate MEL, an accurate airworthiness certificate, an approved APU front support and a decent budget. All these featured in the investigation findings.

Regarding the ‘inadequate’ maintenance procedures, investigators discovered what was termed in the report as a ‘departure from established routines’. This included the appropriate preparation of the aircraft for flight, the appropriate reporting and actioning of malfunctions and additionally ‘modified’ inspection criteria on flight critical components. Despite all the other maintenance violations, it was this latter maintenance sin that would see the aircraft’s demise … all for the want of a reliable part.

During heavy maintenance, the four bolts holding the tail empennage in place were supposed to be inspected comprehensively. This involved removing the bolts and their sleeves one by one and then examining them with ultrasonic equipment. A similar process was supposed to occur with the APU support strut. Investigators chillingly discovered the inspections on the bolts and the strut were done in a cursory way (the bolts were not even removed) thus invalidating the ‘check’ recorded on the maintenance work-card.

A supervising technical inspector later realised the inspection had not been done properly, but released the aircraft anyway, reasoning there were still significant aircraft hours left before the original inspection was due. The strut and retention bolts failed only a month (and 60 flight hours) later. If the APU strut and the retention bolts had been properly inspected, excessive wear and scouring would have been as obvious to maintenance personnel as it was to the investigators who extricated the strut and bolt remnants from the ocean floor.

It’s a simple truism that aviation safety very literally depends on every part doing its job. Often a statement like this is a general reference to the various ‘parts’ of the maintenance, logistical and operational systems supporting aviation. But the cold reality of aviation is that despite the gloss of our many systems any one mechanical part—incorrectly installed or incorrectly manufactured—can bring an aircraft crashing down.

Complex systems of quality assurance (QA) exist within aviation maintenance, but ultimately the most rigid QA check is simple physics: the laws of physics do not care if the ‘paperwork’ is right only if the part is structurally sound. A reliable part, reliably installed, means an aircraft continues safely to its destination. When a faulty part is not checked and replaced, physics, not the paperwork or the process, always has its way.

It is sobering to think Partnair 394 with all its prescribed maintenance procedures and governing legislation could be brought down simply because of a counterfeit APU strut and four inferior bolts. It’s even more sobering when one considers similar events such as a Boeing 747-200 where maintenance workers installed an incorrect doubler plate resulting in the death of all 225 people on board (China Airlines Flight 611) or where inadequate lubrication on the elevator jack-screw of a McDonnell Douglas MD 83 caused the death of all 88 people on board (Alaska Airlines Flight 261). In all these cases, aviation safety, and more precisely, aviation passengers, depended on simple mechanical parts. Sadly, one or more of those parts failed them.

In Partnair 394 there was a clear casual factor relating to the inflight disintegration: the APU strut. The investigation team was unable to determine where the strut had come from. There were no identifying marks or maintenance records for the strut. In all probability it was an inauthentic part acquired or manufactured locally to save money. The justification was probably: ‘well it’s only going to be used on the APU’. The series of events—the ongoing use of the APU in flight, the resonant vibration from the APU, the weakened tail retention bolts—all converged to produce the critical component failure: a simple part that should have done its job didn’t, and the laws of physics proved unforgiving. For want of a genuine part…

As a result of the Partnair accident, reforms were introduced in the 1990s to curb the use of counterfeit parts, but recent research estimates up to 10 per cent of global trade involves counterfeit materials. Aviation is not immune. In 2012, a congressional investigation discovered 1800 cases of forged components, some of which had even found their way on to the presidential aircraft, Airforce One. Legislation has since been introduced in the USA to stem the flow of forged components—many of which flow from multi-billion dollar industries in China.

Enter the brave new world of 3D printing. The versatility of the 3D printing process, as well as the extremely low wastage (10 per cent of original material compared with 90 per cent in traditional cut-from-the-block techniques), has meant it is quickly finding its place in aviation logistics. It is little wonder then that many industry specialists see spare parts of the future as ‘prime candidates’ for 3D printing. The Partnair 394 accident though offers a moderating caution to the enthusiasm surrounding the new tech—namely, fake parts are also prime candidates for 3D printing.

And what was true for an apparently low-risk strut on an apparently secondary piece of equipment is also true for printed parts in the future: it only takes one failed part—3D or otherwise—to bring down the biggest aircraft.

The pilot in command of Partnair 394 had nearly 17,000 hours, the co-pilot nearly 16,000 hours, but for want of a dependable part their vast experience was for nothing. When Partnair 394 began to break up the pilots were as much passengers as the terrified occupants in the cabin. The aircraft had on board that day the company operations manager who was able to solve the problem of an unpaid catering bill, but for want of a reliable part management skills were for nothing as the machine began to come apart. Partnair 394 even had a mechanic on board that day who was assisting with the ongoing technical problems, but for want of an authentic part technical skills were for nothing when the four retention bolts sheared.

In the ever-more demanding economic milieu of modern aviation, harassed operations staff and rushed engineers may be forgiving of non-genuine parts, but velocity, vectors and inertia will never be.

See also our feature on 3D printing in this issue (March-April 2015) of Flight Safety Australia.