With the ‘flu’ season heading towards us, it’s easy to forget that those so-called ‘harmless’ over-the-counter (OTC) medications you buy from a supermarket or pharmacist can cause serious side effects and impair your ability in the air, or on the ground.

If your job is anything to do with aviation, whether pilot, air traffic controller, engineer or ground crew, you need to know that taking OTC painkillers can seriously affect your performance and possibly your career if you test positive to them during random drug and alcohol testing.

If you’ve got a seasonal illness that is serious enough to affect your concentration, sharpness and endurance, drugging yourself with OTC medication and soldiering on is not an option.

According to the ATSB report Accidents and Incidents Involving Alcohol and Drugs in Australian Civil Aviation: 1 January 1975 to 31 March 2006, at least two accidents involved OTC medication during that time period.

A pilot in whom antihistamine was found, had been engaged in an aerobatic flight that ended with a crash into the ground. No mechanical factor was found to be responsible for the accident. Similarly, a fatal accident in which a decongestant agent was found in the pilot involved a fixed-wing crop-spraying aircraft, which collided with powerlines.

While the results of this study show that the prevalence of drug and alcohol-related accidents and incidents in Australian civil aviation overall is very low, in the USA it’s a slightly different story. In 2013 the Federal Aviation Administration actually sent out a letter to warn their estimated 455,000 general aviation pilots of the potential dangers of over-the-counter medication after a report found that 12 per cent of fatal general aviation crashes in the past decade were due in part to their use.

It may seem easy to treat that nagging cold with some simple painkillers—after all who has time to wait in a doctor’s office with dozens of other infected people? But those seemingly simple cold and flu treatments, cough elixirs and antihistamines have the potential to develop serious side effects, particularly when you’re combining a ‘cocktail’ of them.

Common cold and flu medications such as Sudafed, Codral Original Day & Night Cold & Flu, Demazin and Lemsip can contain agents such as pseudoephedrine. These can cause problems such as elevated blood pressure and increased heart rate. Some of these medications also contain codeine which has many undesirable effects such as euphoria, drowsiness, slowed breathing and possible respiratory arrest, nausea, confusion, constipation, sedation, unconsciousness and coma. There is also the potential for tolerance and addiction to develop with prolonged use. And don’t forget that cough medicines and suppressants can also contain significant amounts of alcohol, which can cause sedation and problems with alertness.

Got a headache with that cold? Well aspirin—a very common and simple analgesic agent—may relieve that minor pain, but it can also cause gastrointestinal upset and bleeding, especially in combination with alcohol (such as cough mixture medicine). Some people may experience heartburn, stomach pain, minor bleeding from the stomach and worsening of stomach ulcers. In people with a history of bleeding, aspirin also slightly increases the risk of more serious bleeding from the gut and can, very rarely, contribute to a stroke caused by bleeding in the brain (haemorrhagic stroke). Aspirin also interferes with the blood clotting process, making any bleeding more severe than it might otherwise be.

Paracetamol such as Panadol is a well-used and generally safe drug, but can cause liver damage when taken in large doses (well beyond the recommended dosage). Hay fever medications (such as the antihistamines) can cause drowsiness, even some of the newer non-sedating versions. Anti-inflammatory medications, such as the non-steroidal class of drugs (Nurofen, Voltaren) are generally safe, but also have some side effects. These can include gastrointestinal irritation.

There are also dangers that arise from the interaction between the medication effects and the aviation environment—in terms of altitude and hypoxia, pressurisation (see below) cold, fatigue and shiftwork.

Barotrauma-adverse effects in the air

Your biggest problem if you’re working in the air and suffering from a cold is if your nasal congestion affects the Eustachian tube, which runs from the back of the throat to the middle ear. The tube is how the body can equalise the air pressure either side of the eardrum, both at ground level and in climb and descent.

You can check your Eustachian tube function with the ‘Valsalva manoeuvre’ holding your nose closed with fingers and closing your mouth breathing out maximally (as if straining at stool) and you should feel the air pressure equalising.

Middle-ear pressure, however, occurs when ascending gas in the middle ear expands and vents through the Eustachian tube and clears quite easily as the ears ‘pop’. The problem is different on the descent in that the ambient pressure rises relative to the middle-ear pressure. This cannot be equalised as easily and is exacerbated if there is congestion in the nasal passages related to a cold, sinus problems, or medical conditions such as nasal polyps.

Barotrauma presents with increasing pain on the descent, with an inability to equalise the pressure in the middle ear by any of the methods above. There is likely to be a reduction in hearing and in severe cases the eardrum can perforate. If this does occur, the pain disappears as the pressure either side of the eardrum is then equalised. You should seek help, preferably from your general practitioner or your designated aviation medical examiner (DAME), if these symptoms occur.

As a safety-sensitive aviation activity (SSAA) employee it’s up to you to consult with your doctor or DAME if you have any doubt over any medication—prescribed and non-prescribed—that you are taking. Also, you:

REMEMBER if the OTC directions say, ‘be careful driving or ‘avoid using heavy machinery’ it probably applies in the air too.

What is CASA’s AOD eLearning?

All DAMP organisations are eligible to use the AOD eLearning.

US aeroplane crashes as a result of over-the-counter medications

On 5 May 2012, a Cessna 177B crashed after experiencing an aerodynamic stall about 300 feet above the ground during a go-around. The investigation found no pre-accident anomalies with the aircraft. Post-accident toxicology testing of the fatally injured pilot showed that the pilot had taken diphenhydramine, an OTC sedating antihistamine commonly marketed under the names Benadryl and Unisom. The drug’s effects and pilot impairment were contributing factors in the accident. (ERA12FA319)

On 30 March 2011, a Cessna 310R crashed while conducting a non-precision approach to a mountain-top airport that was obscured by clouds and fog. The investigation found no pre-accident anomalies in the aircraft. Toxicological testing of the fatally injured pilot found significant amounts of doxylamine, a sedating antihistamine, in combination with other drugs that suggested use of an OTC cold medicine such as a Nyquil or an Aldex product. The drug’s effects and pilot impairment were contributing factors in the accident. (ERA11FA218) 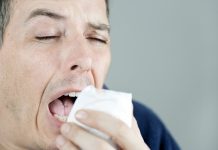 Avoiding flu while you fly