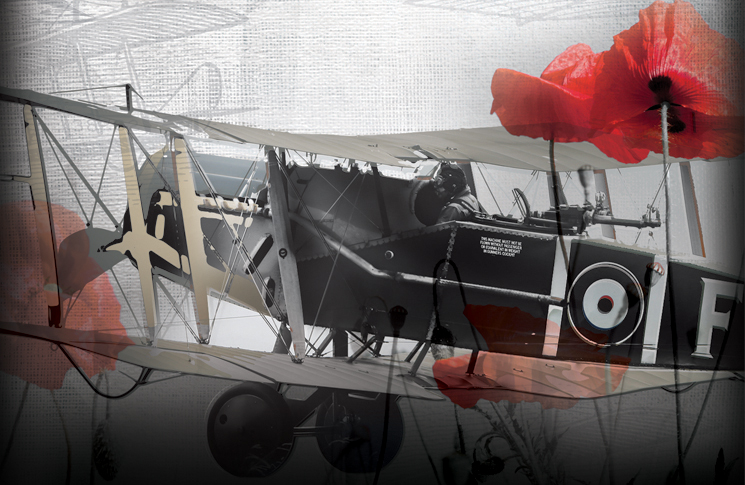 Flight Safety Australia looks at what has changed—or stayed the same—since aviation came of age in World War I.

Over the four years of World War I (1914-1918), aviation grew from a risky experimental pursuit into an effective weapon and form of transport. Some of the lessons that were written in blood over those four turbulent years are still valid today. With due respect to the brave pioneers of the time, other so-called lessons are simply amusing.

The aeroplane entered the First World War as a delicate device, made in several different configurations and capable of flight only in the most favourable weather. Four years later it had evolved into a weapon capable of international flight by night and able to carry loads measured in tonnes.

World War I was ‘the most intense period of development in aviation history,’ the founding director of The Australian Vintage Aviation Society, Andrew Carter said.

Aviation entered the Great War in its fledgling stage and emerged ‘with the foundations of true air transport in place,’ he said.

‘In 1913, aircraft that could fly a circuit were few and far between, hence initial training in the form of short hops,’ he said. ‘By 1918 there were aeroplanes capable of flying between continents.’

Many of the developments that came from four years of war remain part of aviation to this day.

‘The attributes of a sportsman’: human factors 1918-style

By modern standards, human factors played little role in aviation during the Great War. This was a time when it was thought acceptable to order soldiers to climb out of a trench into machine-gun fire – and wartime aviation was just as brutally tough-minded. Consider this extract from a 1918 textbook: ‘Sometimes it happens that a pupil, on his first or second solo flight, may lose himself, in which case he has only himself to blame for not studying the lie of the land whilst under dual-control instruction.’

The chief preoccupation in human factors was on selecting suitable candidates for pilot training.

In September 1918, T.S. Rippon, and Lieutenant E. G. Manuel, of the newly formed Royal Air Force, published a report in The Lancet medical journal titled The Essential Characteristics of Successful and Unsuccessful Aviators. It is a fascinating piece, for what it reveals, intentionally and unintentionally, about the attitudes of the time.

Aviation was seen as sport, not business: ‘The successful aviator has always the attributes of a sportsman,’ enthused Dr Rippon. ‘As a schoolboy, he takes part in all forms of athletics and usually played for the school in one game at least.’

Young men made the best pilots, The Lancet authors declared because of ‘the resiliency of youth,’ which enabled them ‘to recover quickly from the strain and stress they are called upon to undergo’. Other sources commented that: ‘Some men learn to fly in two hours; some take as long as 10 or 12 hours.’

Rippon and Manuel noted that war had democratised aviation, which then, as now, was far from the cheapest vocation. ‘Flying is not now confined to the public school boy, the cavalry officer and the athlete. We take many of our pilots at present from the middle classes and some from the artisan class,’ they declared.

These attitudes appear to have applied on both sides of the Western Front. ‘The Germans always selected their aviators from their cavalry until recently,’ the British journal Flight reported in March 1918.

Other attitudes are extraordinary to modern aviation sensibilities. On the subject of what we would now call systems knowledge The Lancet authors wrote of their: ‘absolute conviction that the less the fighting scout pilot knows about his machine from a mechanical point of view, the better.’ The reason, expressed in convoluted Edwardian language, was that knowing their aircraft’s limits would scare fighter pilots away from exploring those limits. ‘Some of the most experienced and prominent pilots of the present day, however, uphold our conviction.’

Another conviction was that stick and rudder skills trumped all others.

‘One of the most important characteristics we have noticed in successful aviators is “hands”. This characteristic is difficult to define but may be described as follows. The horse rider with good hands is able to sense the mentality of a horse by the feel of the reins and also to convey his desires accurately to his mount.

Hazard perception and management were positively discouraged, perhaps understandably, given the abundance of hazards at the time. Speaking with approval The Lancet authors said: ‘The unmarried man (faced with the possibility of crashing while doing his first solo) in most cases dismisses the thought or takes the risk in the same way as a horse-rider puts his mount at a fence in strange country.’

Marriage was thought to diminish this essential willingness to take risks. ‘If a man marries after he has flown several hundred hours, and flying has become automatic, marriage may not apparently affect him for some time. In many cases it may even make him steadier and more careful, but sooner or later it will, in most cases, have a definitely deteriorating effect.’

Besides matrimony, other characteristics of poor aviators included ‘flabby muscles’ ‘adenoids’ and ‘stammering,’ which were associated with lack of interest in school sports and ‘clerical or sedentary’ occupations’.

‘Most of those pilots who were in business or clerical work possessed considerable sporting aptitude.’

Without apparent irony, Rippon and Manuel listed four examples of successful pilots, three of whom were dead, two from enemy action and one from a flying accident. The survivor of the four had been seriously injured in a crash.

The editors of Flight were less convinced of this ‘good fellow’ picture of the successful pilot. ‘Every now and then one met the type with splendid physique and apparently unshakeable courage who learnt to fly indifferently, or was unable to learn at all, and again one met the weedy pale type learning quickly to fly and turning out to be a first-rate pilot,’ the magazine noted in 1918.

Safety tips then and now

At the same time, those who were actually flying were discovering and formulating maxims that still hold.

In 1918, Royal Naval Air Service Lieutenant, W.G. McMinnies, wrote a manual of Practical Flying, which, with allowance made for the technology and knowledge of the time still has some valid lessons for the VFR pilot. The book discussed best gliding speed, the difference between best rate and best angle of climb and the use of rudder to counter adverse yaw.

Among a few public school platitudes are gems of immortal common sense, such as this injunction against low-level manoeuvring: ‘It is a bad plan at any time to turn near the ground because there is little air space in which to correct bumps, sideslips or other unexpected occurrences.’

And after nearly 100 years, this advice on turning back after engine failure is as true as ever: ‘The rule is that, in 99 cases out of 100, it is better to go on and land in a straight glide even on bad ground. Hundreds of pilots of great skill and experience have crashed through failing to observe this golden rule.’

However, in attitude to risk and analysis, McMinnies took an old-fashioned stiff-upper-lip view. ‘It is a bad thing when an accident has taken place for pupils to be able to congregate and discuss all the details among themselves,’ he wrote.

‘It would be far better if they were able to go away and play a game of football or cricket, and so forget the accident, otherwise the less keen and stout hearted among them will begin to brood …’

In the last years of the war, government and business thinkers were turning their attention to civil aviation, which was emerging as one of few potential benefits to come from years of slaughter. Far from the halls of power, a few military fliers including Australian Charles Kingsford Smith, Bert Hinkler and the Smith brothers, Ross and Keith, were developing ambitions to fly for glory and profit in peacetime.

Aviation was changing from a cottage industry into a national enterprise. In France, L’Etablissement Central de l’ Aerostation Militaire, which had been advising the army about ballooning since 1877, turned to aeroplane research. In Germany, the German Aeronautical Laboratory was founded at the University of Gottingen. (Among its breakthroughs were the thick, high-lift wings of late-war Fokkers,) The United States founded the National Advisory Committee for Aeronautics (NACA) in 1915.

In 1917, a Mr G. Holt Thomas told the Royal Aeronautical Society that commercial aviation would ‘revolutionise the world not only from a commercial point of view, but from a humanitarian point, much more indeed than it has revolutionised warfare.’

Holt Thomas prophesied that safety would be paramount in civil aviation. There would be, he said, ‘A very small future for aircraft after the war if it were looked on as highly dangerous, and the public must be instructed by practical demonstration, (which means aerial services that run day after day) that flying is a good deal more practical than it looks.’

By January 1919, the UK government’s civil aerial transport committee (which included an Australian delegate) had recommended widespread technical training for ‘mechanics’ and the establishment of university courses for engineers.

The committee also recommended accident investigation should be modelled on the Board of Trade’s investigation into railway accidents. ‘Power should be conferred on the appropriate government department’, it reported.

In the early post-war months of 1919 Flight was reporting with optimism: ‘There is every reason to expect that the industry will be in a position to meet efficiently and adequately the urgent demand for more rapid transit, and that aerial transport will pass, though not without an awkward transition stage, into the routine of civil life,’ it said.

And by 1919, the enthusiastic Dr Rippon had come up with a more lasting prediction than his public school analogies. Writing in Flight he said: ‘Given a series of landing grounds, a wireless telephone informing the pilot of the weather conditions en route, and a reliable machine, an experienced pilot should last indefinitely in work of this nature.’

At this year’s Avalon Air Show the customary roar of military jets was joined by an earlier and equally warlike sound—the wasp-like buzzing of a World War I rotary engine.

Aircraft from New Zealand teamed up with a flight from TAVAS, The Australian Vintage Aircraft Society. TAVAS is a flying museum whose members build full-size, flying reproductions and replicas of aircraft from the first 25 years of aviation history.

TAVAS founder, Andrew Carter, says the not-for-profit organisation aims to educate   Australians about early flying machines; the people who flew them during World War 1; and how they helped create the world of aviation we know today.

* Cessna specs are for the 172R version, introduced in 1996, and regarded as the modern version of the 172. Fokker performance figures are for the most powerful BMW-engined version. Less powerful Mercedes engines were also used. Vne and stall speeds are taken from the type record for a de Havilland Gypsy Queen engine DVII reproduction built in 1965 for a movie.