A company in the United States has successfully flown a general aviation aircraft via remote control, marking the first time a large fixed-wing aircraft has flown from a FAA-designated test site.

Aurora promotes the Centaur, based on a twin engine Diamond DA42, as an intelligence, surveillance and reconnaissance platform capable of flying with a 90 kg payload for 24 hours at 27,500ft. The Centaur can also switch between manned and unmanned operations with a conversion time of just four hours.

“Having Centaur lead the way in the U.S. as the first large aircraft to fly in one of the FAA-approved test sites is an important milestone for our company, Griffiss, and the FAA,” said Dr. John S. Langford, chairman and CEO of Aurora.

“Global interest in the Centaur has increased dramatically in recent months,” said Langford. “And a number of customers have expressed interest in the one-two punch of combining Centaur’s medium altitude, long-endurance capability with unique expertise acquired on other Aurora unmanned aircraft programs.” In December 2014 Aurora’s Orion UAS shattered the world unmanned aircraft endurance record with an 80-hour flight. The previous record was 30.5 hours, set by a Global Hawk UAS in 2001.

“Our proven long-endurance, medium altitude platforms are ready for action, whether deployed by the military for ISR missions, or in the skies meeting the needs of a wide range of other security, scientific or commercial applications,” said Langford.

You can read more about the Centaur on Aurora’s website. 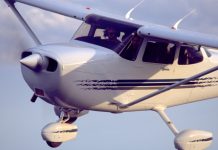