A glider built to fly into the stratosphere made its first flight recently.

The Perlan 2 is built fly to 90,000 feet to conduct scientific experiments into giant mountain waves that help create the ozone hole and change global climate models. To operate at this altitude its wings must be able fly in less than three per cent of normal air density and at temperatures of minus 70 degrees C, similar, its backers say to atmospheric conditions on the surface of Mars.

The two-seat glider has a gross weight of 816 kg, a wingspan of 26.6 m (84 feet) and is equipped with a ballistic parachute for low altitude recovery. It also has a stabilising drogue parachute for high altitude recovery and a dual redundant cabin pressure system, using compressed air bottles and regulators.

Perlan 2 flew late last month over Redmond, Oregon, US, with pilots Jim Payne and Australian Morgan Sandercock on board. The first flight was towed to 5000 ft and lasted 35 minutes.

A flight to 90,000 ft is planned for July 2016. According to the project backers (and the Federation Aeronautique International website) this would set ‘a new world altitude record for altitude in level flight exceeding 85,069 ft set by a Lockheed SR-71 reconnaissance aircraft in 1976. A Soviet MiG 25 set the absolute altitude record for landplanes of 123,534 ft in 1977 in a ballistic trajectory.

Flights of up to 100,000 ft are planned by phase 3 of the project in 2019 in flights exploring the Polar Vortex in the northern hemisphere. 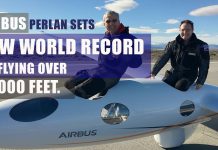 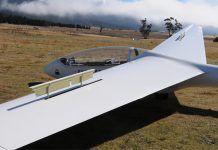