A Lockheed Martin unmanned helicopter has demonstrated its bushfire fighting abilities in front of United States federal officials this week in Idaho.

The K-MAX is capable of aerial fire suppression 24/7, and offers hotspot detection. It maintains its capabilities in hot temperatures and even when conditions limit visibility for pilots, the K-MAX can provide automated water pick-up, delivery, and line-building.

Official from the United States’ Department of the Interior’s Office of Aviation Services and the U.S. Forest Service Fire and Aviation Management division were on hand to watch as they currently consider different types of pilotless aircraft in the ongoing fight to contain and extinguish bushfires.

Speaking to Associated Press, Lockheed Martin’s vice president and general manager for Aviation and Unmanned Systems Dan Spoor says, ‘It will improve the safety of not only our ground firefighters, but the communities they’re out there to protect.’

In Idaho, the K-MAX demonstrated three communication methods, using line of sight and two different satellite links. While it can be guided via remote control, it can also fly autonomously once it’s told what to do.

Even if it loses contact with ground controllers, officials say it can complete a task and can also be programmed to fly to a specific landing zone on its own if it loses communication for a pre-set amount of time, such as 10 minutes.

‘The technology of the auto-control for the aircraft is not really the hard part,” Bathrick said. ‘It’s all this sensor technology that integrates with the autopilot to tell the helicopter where it’s at.’

The US, not unlike Australia, is susceptible to devastating bushfires. In 2015 so far, the country has experienced 51,110 fires with more than nine million acres burned.

(The video above was shot by Lockheed Martin during testing prior to an October 14, 2015 demonstration of a remotely-piloted K-MAX helicopter dropping water on a simulated wildfire.) 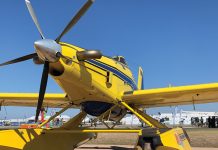