Beech 200BEECH Door warning system—indicator suspect faulty. SDR 510021870
In flight, the door open annunciator illuminated for about five seconds three separate times within one minute. Door latches and index markers were checked secure pre- and post-flight. Door appeared secure at all times. The following day further fault-finding was carried out where it was identified that the lower door warning switch (P/No. MS25008-1) plunger was found to be intermittently stuck inside the switch assembly. The switch was replaced with a serviceable switch. 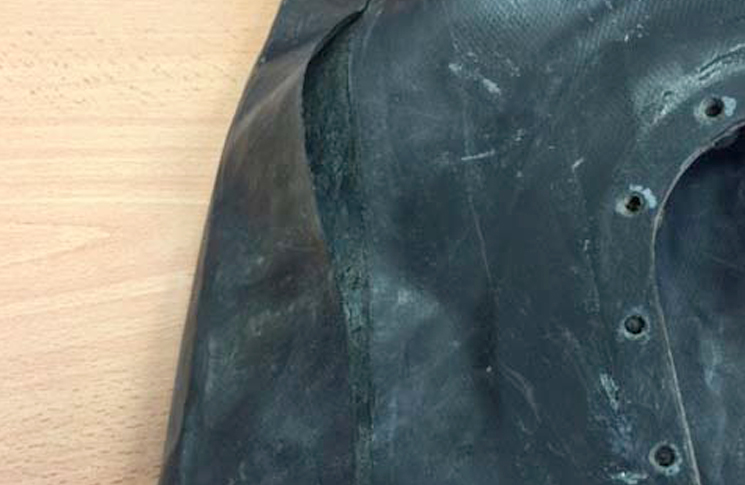 Beech 200BEECH Fuel storage—fuel tank leaking. SDR 510022073 (photo above)
During cruise the crew noticed fuel streaming from the R/H wing. Condition traced to a seam separation of the R/H leading edge fuel cell. It would appear that the adhesive used to construct the cell at manufacture is not capable of withstanding the heat generated in tropical Australia. The cell material itself appears to be still in good condition. P/No: 20134. TSN: 3336 hours/2863 cycles.

Beech 200BEECH Landing gear position and warning system—microswitch incorrect rigged. SDR 510021871
After a phase check where the R/H MLG uplock switch was removed, refitted and rigged, the transit light remained on after the gear was retracted. In rectifying the defect, engineers applied another turn to the rigging of the micro switch and this has prevented a reoccurrence of the false indication. P/No: 1013646285. TSN: 5881 hours/8711 cycle.

Beech 200BEECH Nacelle/pylon plates/skin—cowling loose. SDR 510021898
During flight the pilot saw the top left engine cowl was not secure. The cowl in question had been secure during the pre-flight inspection and during the climb after take-off, becoming unsecure in the cruise. The pilot returned where the front left latch was found to have become unsecure. The pilot spoke to the engineer who last secured the cowl, who confirmed having properly secured it. 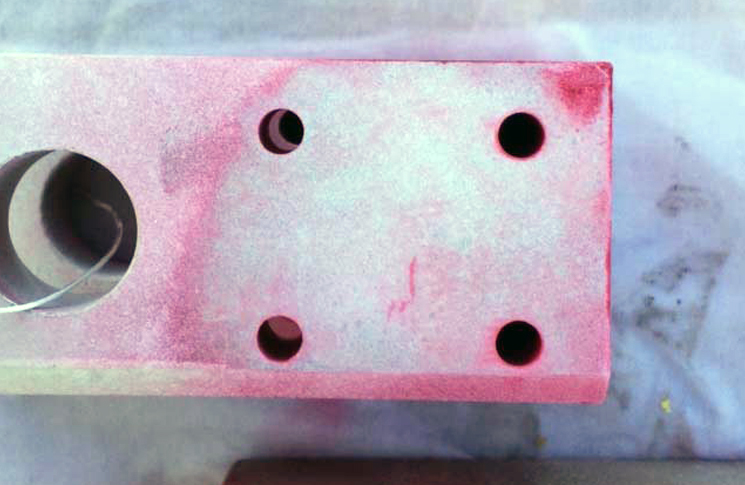 Cessna 152 Wing attach fittings—bracket corroded. SDR 510021883 (photo above)
During a SIDs inspection, corrosion was noticed on wing attach brackets. After removal of corrosion, a faint line was seen. Brackets will be replaced. P/No: 0512122.

Cessna 208B Trailing edge flap control system—bellcrank loose. SDR 510022183
Aircraft violently banked to the left on approach to land after selection of third stage of flap. Aircraft landed safely. Engineer had found that he was able to move the L/H flap by hand. The pivot bolt for the L/H rear inboard bellcrank had come loose allowing the lower part of the bellcrank to move freely. 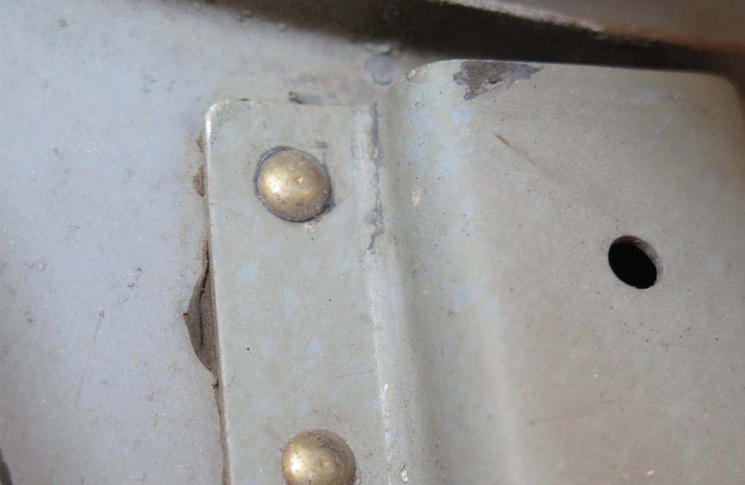 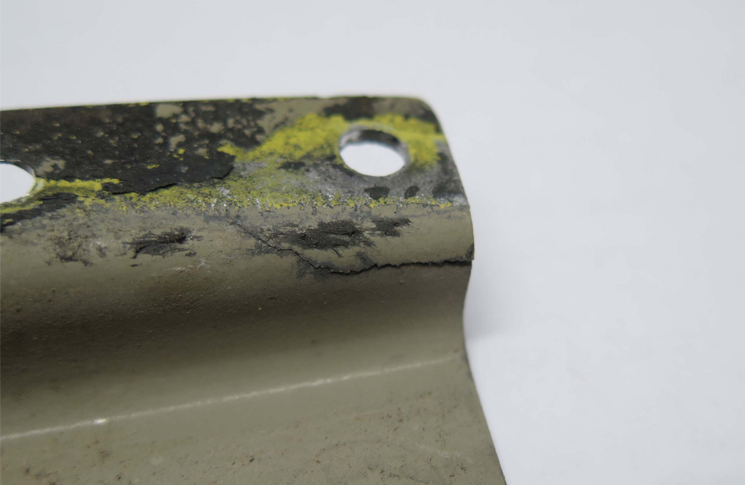 Cessna 208 Fuselage structure—channel cracked. SDR 510022121 (photos above)
Lower support channels on firewall of aircraft are cracked. These channels carry the load from the undercarriage spring into the aircraft structure. On later models of the Cessna 208 these channels were replaced with a larger casting. We will be installing SK208-90B (firewall fitting reinforcement installation) to install the larger casting. P/No: 26530121L/H26530122R/H. TSN: 13963 hours/11813 cycles

Cessna 404CESSNA Elevator control system—able jammed. SDR 510021971
On descent into Darwin from 8000 ft autopilot pitch wheel did not give enough nose-down authority for descent. Disengaged autopilot and attempted to trim with electric trim control. Trim didn’t move at all. Pulled electric trim circuit breaker and attempted to manually actuate the elevator trim wheel. Turning the wheel gave heavy resistance and the trim position indicator remained in the same position and the wheel sprung back to its original position. Investigation revealed he inboard trim cable jammed beside the pulley FS399.00 (IPC 05-30 Fig 2 No. 91) at the rearmost bulkhead. Keeper pins were still in place and serviceable. The cable was re-installed to the pulley and rigging, travel and duplicate inspections carried out and checked serviceable. 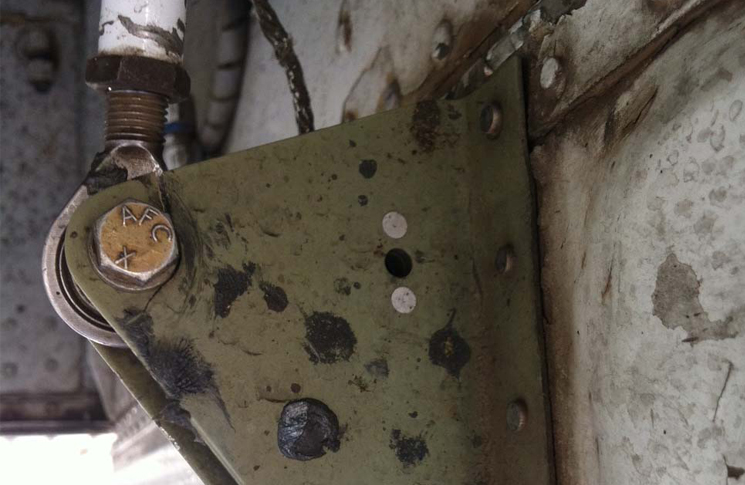 Cessna 441 Nose/tail landing gear—bracket cracked. SDR 510021972 (photo above)
During the pre-flight inspection, the pilot observed a crack on the forward left hand bracket securing the nose gear door to the door retraction arm, radiating from just above the bolt hole to the outer edge of the forward bracket. P/No: 52130389. TSN: 2007 hours/3262 cycles. 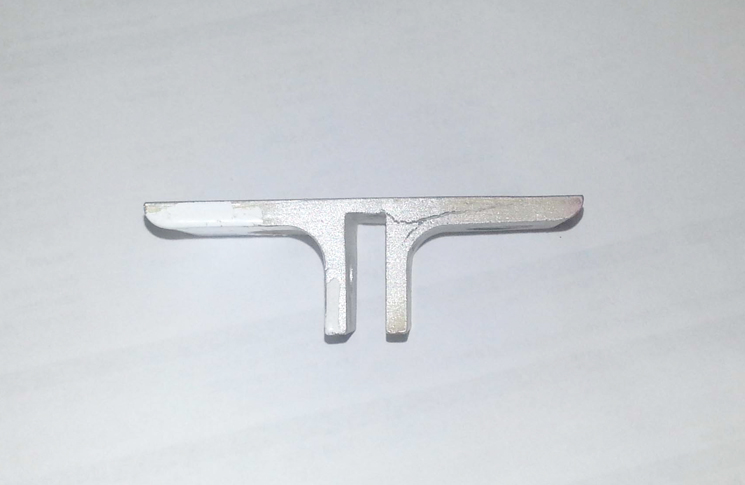 Cessna A152 Horizontal stabiliser attach fitting—fitting cracked and corroded. SDR 510021945 (photo above)
On re-installation of the horizontal stabiliser after SIDS inspections the attach fittings were paint stripped in order to repaint only because the paint was looking a bit crazed. On inspection after the paint was removed, significant cracking was discovered. The matching fitting was immediately sent for NDI and found to be compromised also. Both fittings were replaced with new items. These fittings were only called up for a visual inspection in the SIDS program and so would not have been picked up as defective under normal circumstances. P/No: 0432005104320052. 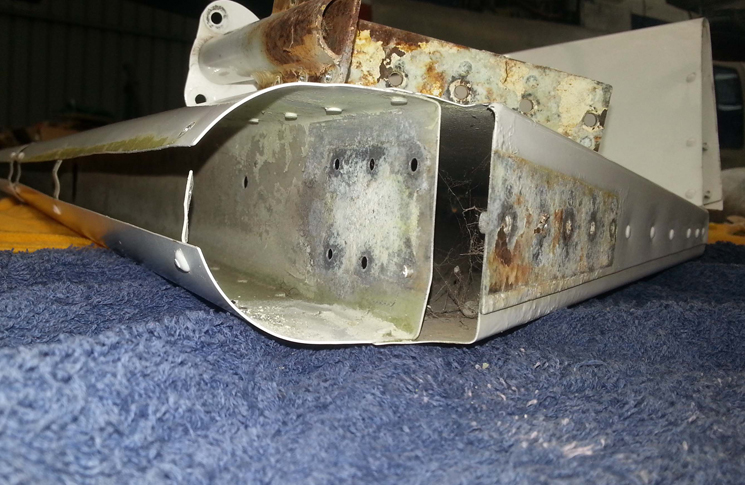 Cessna A152 Horizontal stabiliser structure—elevator cracked and corroded. SDR 510021943 (photo above)
During Operation 20 (horizontal stabiliser and elevator inspection) of the SIDS inspection corrosion was noticed around the edges of the torque tube attach area. The torque tube was removed and the corrosion and cracking was observed underneath. The damage was treated and repaired and the elevator reassembled and reinstalled. P/No: 043200121. 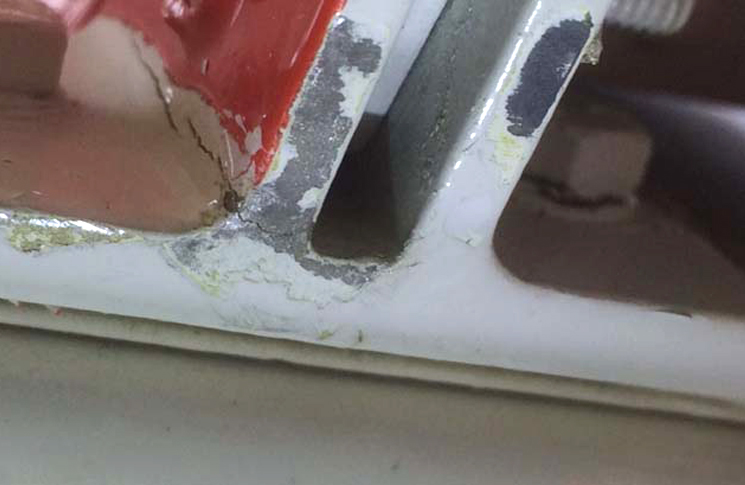 Cessna A152 Vertical stabiliser structure—bracket unserviceable. SDR 510022090 (photo above)
During routine annual inspection, a small crack in the paint was noticed. Upon removal of paint, a crack was found. Nutplates were replaced as a terminating action of repetitive inspections in AD/CESSNA 150/31 a number years ago. SIDs was conducted 2012, and this item was due for next SIDs inspection 10/10/2016. P/No: 0431009. TSN: 8120 hours. 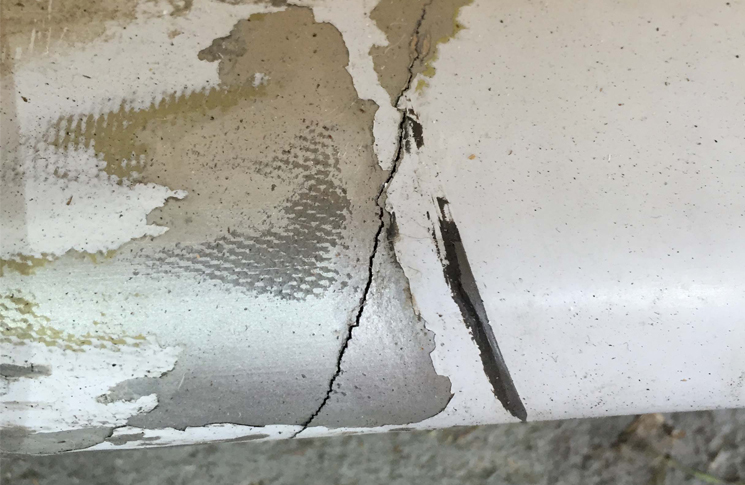 Cessna U206G Wheel—brace cracked. SDR 510022077 (photo above)
During routine inspection, a crack was noted in the upper surface of the forward spreader bar, progressing out from within the float hull. On spreader bar removal, it was revealed that there were two cracks which had extended approximately 50 per cent of the circumference of the spreader bar. Only 20 per cent of the crack was visible without disassembly. P/No: 3532015. TSN: 746 hours/6300 landings/38 months. 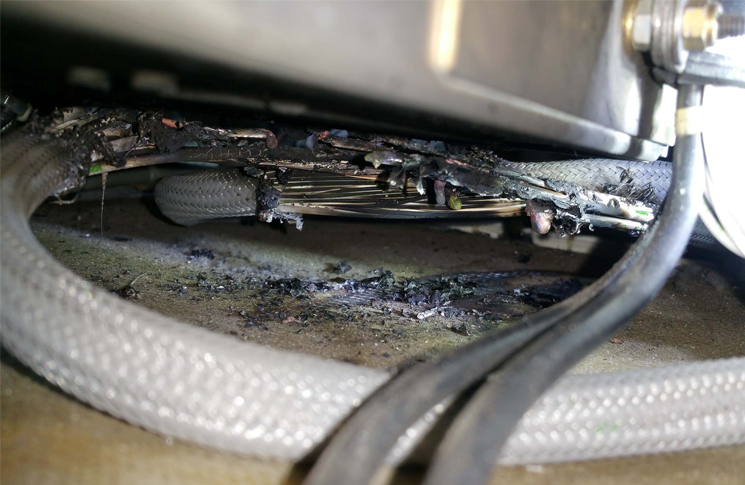 Grob G115C2 Electrical power system—wiring arced. SDR 510022139 (photo above)
A report was received that an instructor and student had experienced black smoke in the cockpit and uncommanded frequency changes on the radio. On inspection it was found that the portion of the loom below the radio rack had shorted out causing severe damage to the loom. 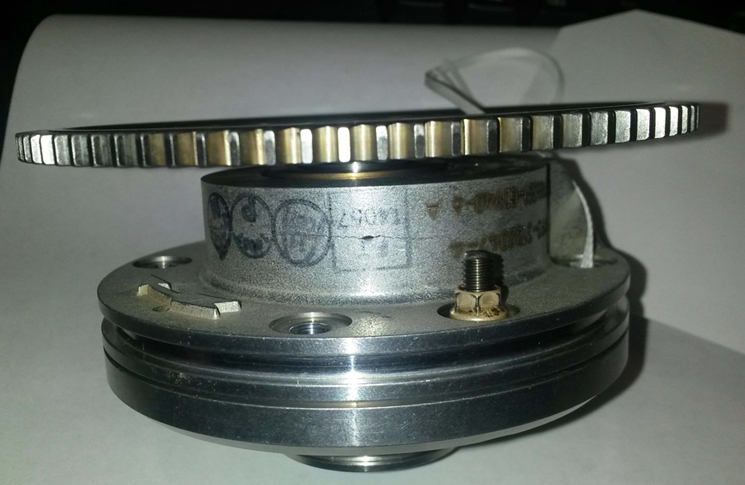 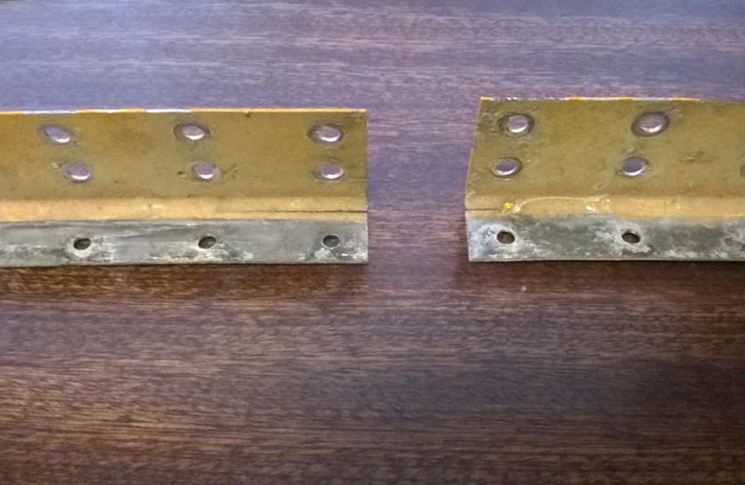 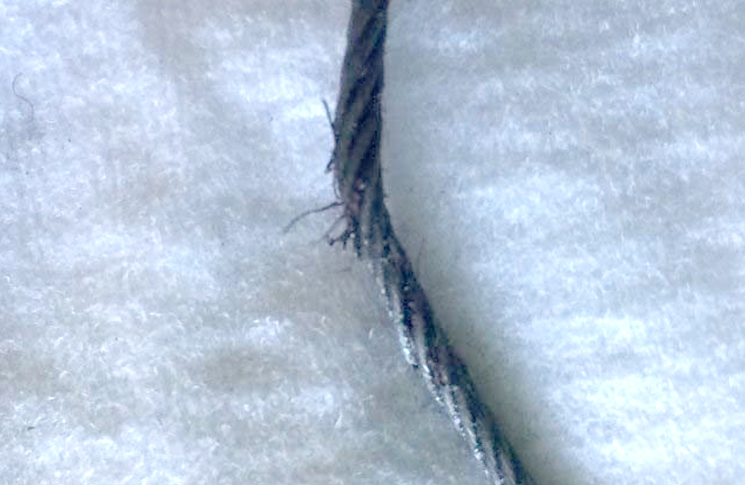 Piper PA28161 Elevator tab control system—cable unserviceable. SDR 510021882 (photo above)
Operators had reported that trim was getting stiff, cable was noticed to have some bulges, upon removal of cable, it was found to have multiple broken strands causing the cable to increase in width, which was causing the barrel assembly to become stiff in operation. It was only after removal from aircraft and removal from barrel that broken strands became apparent. P/No: 62701047.

Piper PA44180 Landing gear door actuator—bolt sheared. SDR 510022242
During engine start L/H main gear door was observed to hang down and flapping with the airflow from the L/H running engine. The L/H main gear door actuating rod attachment bolt to the main gear trunnion had failed. Incorrect maintenance practice/over-torqueing of the bolt suspected to be the cause of the failure. One similar defect reported. P/No: AN3H12A. TSN: 661 hours. 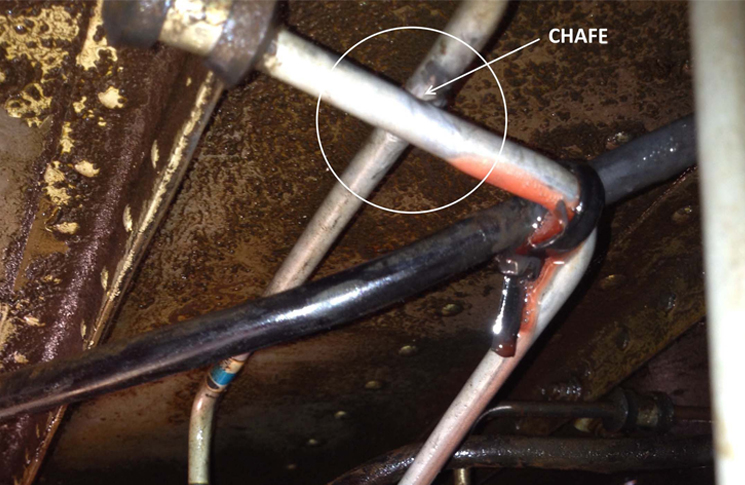 Swearingen SA227DC Landing gear actuator—hydraulic line chafing. SDR 510022230 (photo above)
The pilot reported the hydraulic leak on landing. The aircraft was grounded. The pilot on site identified the leaking pipe behind the main wheel. Chafing had occurred due to inadequate clamping, the damaged pipe was removed and replaced, hydraulic fluid was replaced, engine runs carried out and the hydraulic system tested satisfactory. P/No: 2781032183. TSN: 14927 hours/14740 cycles.