Bell UH1H Main rotor gearbox—bearing incorrect assembly. SDR 510022150
During scheduled maintenance, metal particles were found in the main transmission primary oil filter. Filer was cleaned and refitted. Filter was reinspected after next flight and more metal particles were found in the filter. The decision was then made to remove the main transmission from service. Transmission was disassembled to find cause of metal particles. Upper planetary support bearing was identified as the problem. Mast driving adaptor support and planetary liner support were removed and the old bearings replaced with new serviceable bearings. During this process it was discovered that the upper planetary support bearing had been installed upside down. P/No: 204040135001. TSO: 153 hours.

Eurocopter EC225LP AC generator-alternator—volt regulator out of adjust. SDR 510022075
On short finals the master caution illuminated with comfort light and elec. The crew tried to communicate with each other but the ICS had failed. DC power supply checks, Loss of main battery fault diagnosis, electrical cabinet ventilation checked for blockage and electrical bonding checks carried out on TRUs. Carried out AC checks and adjustment. No. 1 alternator found to supply 112.4 VAC No. 2 115.2VAC. VAC adjusted to 116VAC as per MM. P/No: R3379220. TSN: 1547 hours/2186 cycles/2186 landings/36 months.

Eurocopter EC225LP Indicating/recording system—APM intermittent. SDR 510022091
During descent at approximately 2500 ft the captions CAUT and ENG illuminated. Then both the EID and VMS gauges went red for five seconds then returned to normal colours with a flashing GOV caption for one second. Both screens then indicated normally. On inspection, item 96 EID FAILURE was read, along with Item 99 VMS TOTAL FAILURE and Item 100 VMS FAILURE WITH ENG CAPTION. While all items contained parts of our indications there was no ECL procedure that covered the problem, and no mention of a flashing GOV caption. This is a known anomaly with the EC225 VMS. 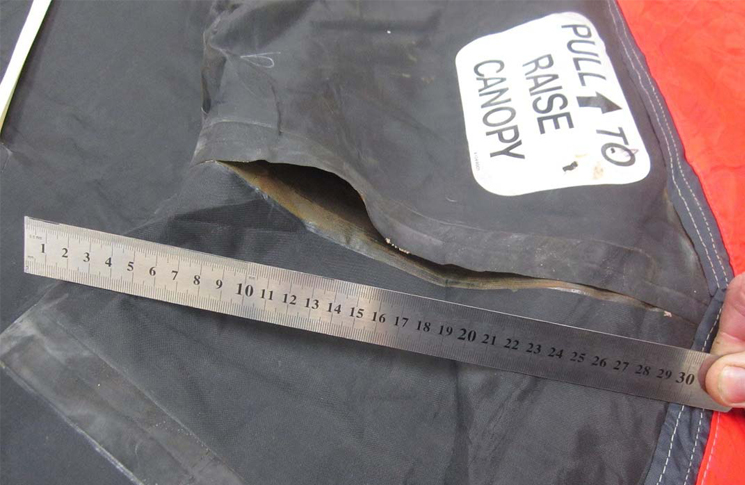 Eurocopter EC225LP Life raft—life raft split. SDR 510021867 (photo above)
Raft was being inflated as part of testing. As the main chamber approached 55 inches in pressure, a seam failed with a loud noise. Normal test pressure in the main chamber reaches 80–90 inches during this part of the test. Inspection revealed it had failed over a length of about 25 cm, adhesive in the seams appears degraded and other seams exhibit similar degradation externally. P/No: 00051055. TSN: 3199 hours/84 months TSO: 578 hours/12 months. 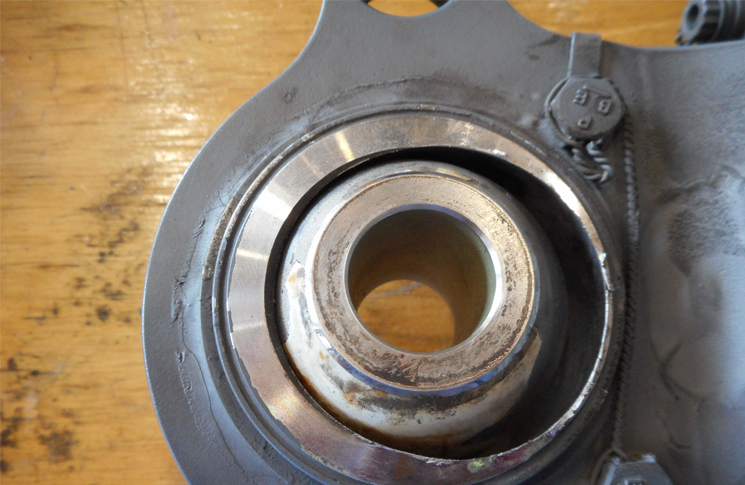 Eurocopter EC225LP Main rotor blades—damper worn. SDR 510022164 (photo above)
During investigation of an on-board M’ARMs (vibration system) alert, the MR/H assembly was closely checked and the black blade damper inboard bearing was found to have suffered wear to the ceramic coating, which was outside limits specified in the maintenance manual. The damper assembly was replaced, test flight carried out and the vibration system returned to normal. P/No: 332A31304301. TSN: 1047 hours TSO: 1047 hours.

Eurocopter EC225LP Rotorcraft flight control—torque tube damaged. SDR 510022158
During scheduled maintenance, upon removal of cockpit flooring, a metallic cover that normally sits above the cyclic controls torque tube between the pilot and co-pilot was found to have been resting on the tube itself, causing a small amount of paint removal and etching onto the tube. P/No: 332A27313400. TSN: 2738 hours/5237 landings.

Robinson R44 Flight control system—thrust lever loose. SDR 510022143
During 100 hour inspection of engine the throttle arm/lever on the carburettor was found loose. The splines between lever and carburettor throttle shaft where just engaged with signs of fretting. The nut which retains the lever to the shaft was still retained by the split pin but once the split pin was removed the nut was found to be finger tight. The splines on the lever and shaft where inspected found to be serviceable. Robinson helicopters tech support was notified by email. New nut and washer fitted and torqued to top of the range per R44 Maintenance Manual Sect 6.440—split pinned.