Lycoming ALF502R5 Engine (turbine/turboprop)—seal leaking. SDR 510021944
During climb, after take-off and with engine air ‘ON’, oil contamination smell detected. No. 1 bearing seal showing early signs of leaking oil. Aircraft has since entered heavy maintenance where the engine will either be replaced or No. 1 bearing seal pack will be replaced. P/No: 231307501.

PWA JT15D5 Turbine engine oil system—oil tube worn. SDR 510022191
During scheduled engine inspection, it was discovered the main oil supply tube assembly for the No. 4 bearing on both the L/H and R/H engines were found to be chaffing on the stainless steel throttle control cable mounting box assembly. Up to 50 per cent through the wall thickness of the L/H engine tube assembly was determined once the tube was removed for closer inspection. New tube assemblies fitted and repositioned for proper clearance. P/No: 3038498. 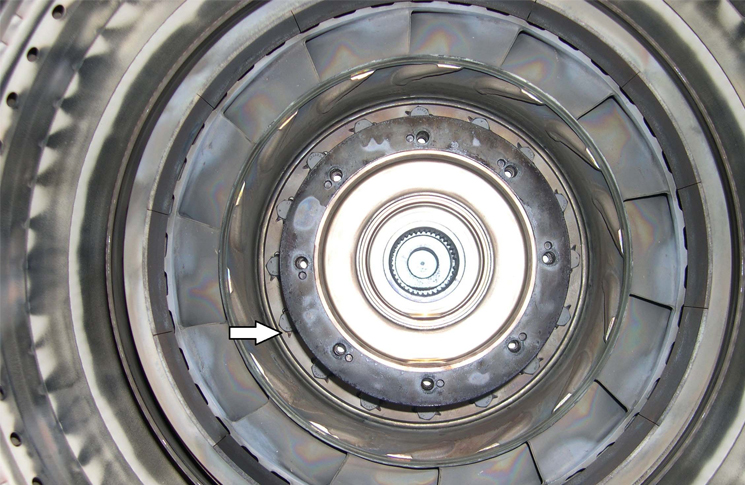 PWA PT6A60A Engine (turbine/turboprop)—stator incorrect assembly. SDR 510022201 (photo above)
During a scheduled borescope inspection, suspected damage was observed on one of the compressor turbine blades. To obtain a more detailed inspection, the engine power section was detached and the compressor turbine removed to investigate possible FOD damage. On removal of the compressor turbine and stator air seal, it was observed the 16 retaining bolts which secured the CT stator and housing to the casing were not secured by the tangs on the lock tab washers. It appeared the bolts were tensioned but the lock tabs remained in an unused condition. P/No: 3033661CL. TSN: 6241 hours/3244 cycles/6057 landings TSO: 2774 hours/1342 cycles.

Rolls Royce TAY65015 Engine fuel pump—fuel system contaminated. SDR 510022249
During flight, the flight crew encountered a centre wing rank, No. 2 fuel pump ‘low pressure’ warning. During defect troubleshooting, engineering staff identified a piece of debris lodged in the No. 2 centre wing tank fuel pump, blocking 50–75 per cent of the unit’s inlet. The debris was removed, operational checks were carried out without fault, and the system was declared serviceable.

Williams FJ441A Turbine engine oil system—relief valve cracked. SDR 510022202
During the pilot’s daily inspection oil was noted all over the rear tail area (R/H side only) further investigation found that the R/H engines oil pressure relief valve was cracked. The engine manufacturer was notified and a replacement part was sent out for installation. P/No: 120931. TSN: 180 hours.