Airbus A320-232 external power system—electrical system short circuit. SDR 510022381
During connection of ground power, bonding lead shorted across two phases, blew a pin out of the socket, produced a flash and blew a hole in the side of the fuselage next to the external power panel. External power receptacle box replacement carried out. Area around damage cleaned and inspected. No further discrepancies noted. P/No: E023201

Boeing 737-81D windshield rain/ice removal—sensor failed. SDR 510022365
The flight crew have reported left side window heat—overheat annunciator illuminated. Turned off as per NNC and then, turned on again. Remained off until 5000 ft on descent when it illuminated again. Window sensor fault confirmed. Window sensor swapped to alternate sensor and tested satisfactory. No further occurrences.

Boeing 737-8FE landing gear position and warning system—proximity sensor failed. SDR 510022388
After take-off, flight crew reported that the NLG failed to retract on first selection. The MLG retracted on first attempt, but the NLG remained in the down and locked position. Checklist carried out with normal retraction after the landing gear was recycled. Flight concluded with no further issues. Initial PSEU data interrogated showing NLG System 1 down sensor disagree and no faults on System 2. Troubleshooting traced issue to the NLG down position sensor, which was replaced. Extension and retraction tests were completed satisfactory. P/No: 189929. TSN: 43512 hours/17692 cycles 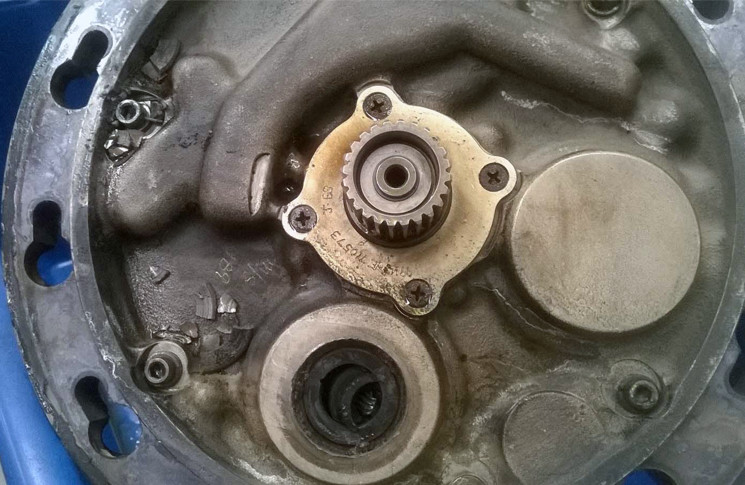 Bombardier CL604 DC generation system—IDG faulty. SDR 510022349 (photo above)
At cruise level the GEN 1 OFF CAS message was posted. Initial visual inspection of the LH integrated drive generator found the generator had lost oil and was had produced a lot of heat. There was delamination on the adjacent cowl, also bubbled paint. After removing the IDG it was observed the shaft was not sheared, but had no resistance if turned. It seemed there was an internal failure in the IDG. The failure may have been caused by a loss of oil, which then caused the IDG to overheat and fail; or something inside the IDG failed which caused an oil leak, and the IDG then overheated. P/No: 731579C

Bombardier DHC8-102 electrical power system—GCU unserviceable. SDR 510022493
Approaching top of descent, there was an abrupt loss of flight instrument functions on the captain’s side and a number of caution and warning lights flickering. Loss of auto pressurisation control, FMS and EGPWS also occurred and electrical chattering was heard over the pilot’s intercom. The captain contacted maintenance watch, the symptoms were consistent with the reasons outlined in Bombardier SB8-24-89, which is that this condition can occur as a result of an undervoltage condition and is rectified by replacing No. 1 DC GCU with one that now includes undervoltage protection. The SB was incorporated and aircraft released to service. P/No: 51539008C

Convair 340 tyre—tyre punctured. SDR 510022286
During landing at the completion of a flight training dual exercise the brakes were applied before the aircraft had completely settled onto the runway causing No. 2 and No. 4 tyres to puncture. The mainwheel assemblies were replaced and the aircraft returned to service. P/No: 39X1314PLY. TSN: 283 hours/175 landings TSO: 623 hours/274 landings

Fokker F28 MK0100 autoflight system—autopilot suspect faulty. SDR 510022303
During flight, the flight crew identified that auto-pilot (AP) No. 2 was unable to be selected once the aircraft was above 500 feet, with a “No A/P Below 500” fault displayed on the multi-function display unit. Resulting investigation was unable to identify the root cause of the defect, with elevator servo motors No. 1 and No. 2 transposed for troubleshooting, operational checks carried out without fault, and the systems declared serviceable. Three similar defects reported.

Fokker F28 MK0100 trailing edge flap control system—nut dislodged. SDR 510022597
During daily inspection, staff identified a nut, which was lodged between two-right hand wing, forward outboard, flap shroud doors. Subsequent investigation identified that the nut was missing from the right hand outboard, forward shroud door actuating rod, with further investigation also identifying other shroud door bolts which were not fitted correctly. Consequently a full inspection of the length of the flap system was carried out, with one further left hand inboard, actuating rod identified to be totally disconnected, and fretting on an adjacent flap torque tube, leading to the removal of the surface protection. All incorrect installations were then corrected as required, the fretted paint protection was restored, and the system was declared serviceable.

Fokker F28 MK070 emergency equipment system—battery discharged. SDR 510022357
During daily inspection, engineering staff carried out an operational check of the emergency cabin lighting, during which two lights failed to illuminate, with the remaining six failing within approximately five minutes. Resultant investigation identified that all associated emergency lighting batteries had been fully discharged, with all affected units subsequently replaced. Further operational checks were then carried out without fault, and the system was declared serviceable.

Fokker F28 MK1000 autoflight system—autopilot suspect faulty. SDR 510022311
Before the FMS calculated descent, the aircraft commenced an uncommanded shallow descent at approximately 300 ft/min. The flight had already received a descent clearance to FL290, and the change of level was picked up within 100 ft. The autopilot was reconfigured from the PROF mode to AFCAS and the rest of the descent was conducted without incident. The FMP settings at the time were HDG/PROF (deviations due weather) with MT, ALT HOLD (with DES armed) and HDGs displayed on the FMA.