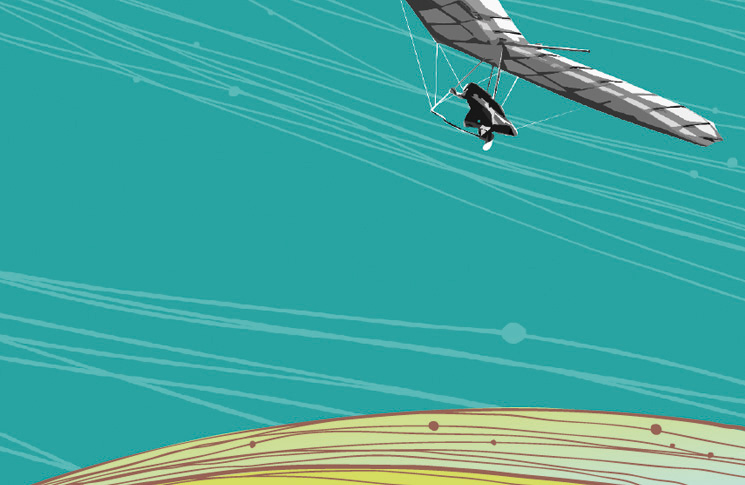 I was running late when I finally left Canberra for the five-hour drive to the town of Gulgong, NSW. Once there I planned to join my hang-gliding buddies for a long weekend of aero-towing and hopefully some epic cross-country flying. I was tired from a late one the night before, but keen to arrive before last light to squeeze in a quick flight, so I drove quickly and didn’t stop for a break or to eat lunch. Being late summer made for some hot, thermic days that were perfect for long distance flying, but also made for very challenging towing. Given it had been a while since I’d done any aero-towing, a couple of practice tows seemed like a good idea.

I arrived at the Gulgong Aero Club hungry and fatigued, but perked up the minute I arrived and saw a field covered with gliders—this was going to be fun. So I set up my Airborne Sting III as fast as I could and did a very quick pre-flight inspection. I attached my tow bridle and release; put a charged battery into my radio and then jumped into the tow dolly declaring myself ready to fly. Or so I believed.

The first tow went well as I focused on keeping the tug aircraft dead ahead and with its landing gear aligned with the horizon until I reached my planned height of 2000 ft AGL. It’s here that if I’d been a little more switched on, I would have noticed something wasn’t quite right.

As soon as I released from the tow, the glider pitched down momentarily, almost as though it had stalled. There was a moment where I thought ‘that’s not right’, but given the glider self-recovered as normal, I gave it no further thought. This was a mistake—a Sting III doesn’t stall at 22 kt, in fact it’s closer to half that speed and had I thought about this I would have realised that something wasn’t right. Instead I just enjoyed the feeling of being at 2000 ft above the ground in cool, smooth evening air. Keen for another practice tow while there was still light, and unconcerned with finding lift, I dived, banked and swooped all the way back to the field.

The second tow went just as well, until I lost all control of my glider. Again I flew some pretty aggressive manoeuvres, but nothing past 90 degrees or approaching a wingover. I pulled the bar almost to my chest and felt the speed rise, and was just about to crank the wing over into a steep turn when, in a split second, everything changed.

The following three seconds felt like five minutes, as the glider pitched down without warning and entered a vertical dive from which it did not recover. Not being an aerobatic pilot, I’d never experienced this attitude in a hang glider before. I pushed the bar out to the full extension of my arms, with absolutely no result. I tried again, but my inputs were having no effect whatsoever.

Witnesses on the ground say they were alerted to the fact that I was in trouble by the sound. The sail was fluttering so loudly they heard what sounded like a ripping noise from over 1000 ft away. After what was probably only around a second of trying to recover, I remember getting slammed into my sail with a great deal of force and realising the situation was now beyond recovery. Hang gliders are weight-shift controlled aircraft and without the weight of a pilot suspended beneath it, the glider was now completely uncontrollable—and falling fast.

I didn’t even have to think about throwing my emergency parachute—it was completely automatic. This is done without the pilot attempting to exit the glider as the ‘chute is designed bring both pilot and aircraft safely back to earth. My hand went to the handle mounted on my chest. I was now disoriented but I tore the parachute away from its mount and in a single motion threw it as hard as I could towards the first patch of sky I saw.

Fortunately my parachute deployed cleanly and opened immediately with an alarmingly loud and physically painful crack. This is probably because I was hurtling earthward at substantially more than the Sting III’s advised never-exceed speed of 46 kt. These parachutes are not designed to open slowly and decelerate you gently like a skydiving canopy; they’re designed to save your life. And let’s face it; by the time you need to use one, it’s probably safe to say you’re not too concerned with a gentle opening.

I remember looking up to check my canopy, and with an enormous sense of relief that simply cannot be put into words, seeing that big red and white lifesaving piece of fabric above me. Looking down, I noticed the ground was still approaching with more speed than I’d have liked, but within less than a second I had slowed to a much more comfortable landing speed.

I was now down to about tree-top height and had just enough time to prepare for impact, so I grabbed a side wire, pulled myself into a legs-down position and bent my knees. With nothing more than the luck that seemed to be abundantly in my favour that day, I missed the trees, dams, parked cars and the clubhouse building, and landed surprisingly gently in a clearing beside some very tall trees. The only injury I sustained was a cut running the length of my forearm and a few bruises, all from hitting the glider during the descent or possibly when the ‘chute opened.

While trying to figure out what the hell happened, one of the people who came to my assistance pointed out that the main under-surface zipper of my glider was completely undone. This zip isn’t normally opened during set-up and is easy to miss if you’re not looking, but isn’t that the whole point of a thorough pre-flight inspection? How had I missed something so important?

Several plausible theories have been suggested as to why the glider behaved the way it did with the main zip undone, but as this is not my field of expertise I’ll avoid speculation. However, my study and subsequent work in the field of aviation human factors suggests to me that many of the factors contributing to such an obvious mistake occurred well before I strapped myself in.

I was hungry, suffering from fatigue from the long drive, sleep deprivation from the night before and I was feeling the pressure of running out of daylight—this is a perfect combination for being off your game and missing something important. I’ve learnt many lessons from the mistakes I made that day, but if I had to choose just one it is this—consider your state of mind before you fly and if necessary, stop and take a breath. Get your head in the game and remember that as pilots, we engage in an activity where even a small lapse in concentration can kill you.