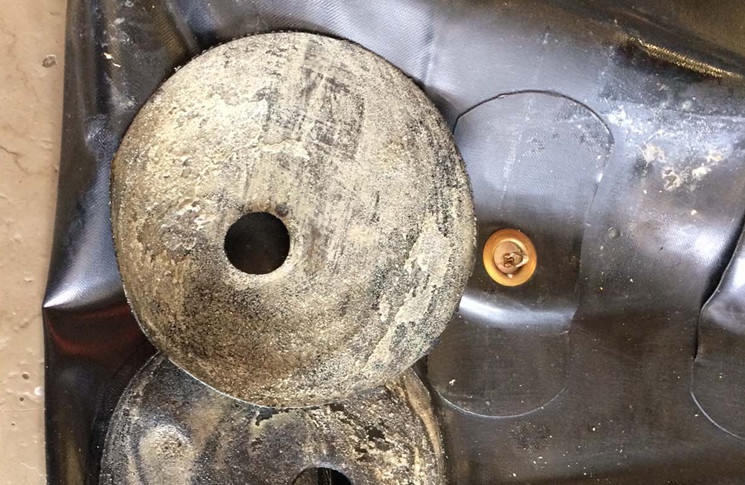 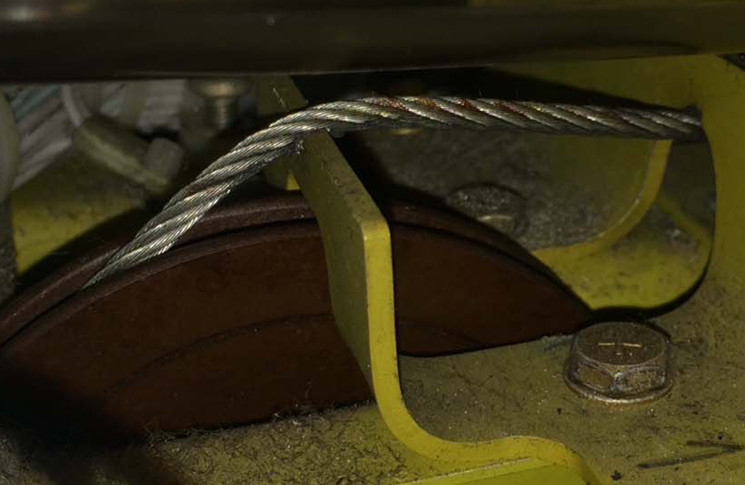 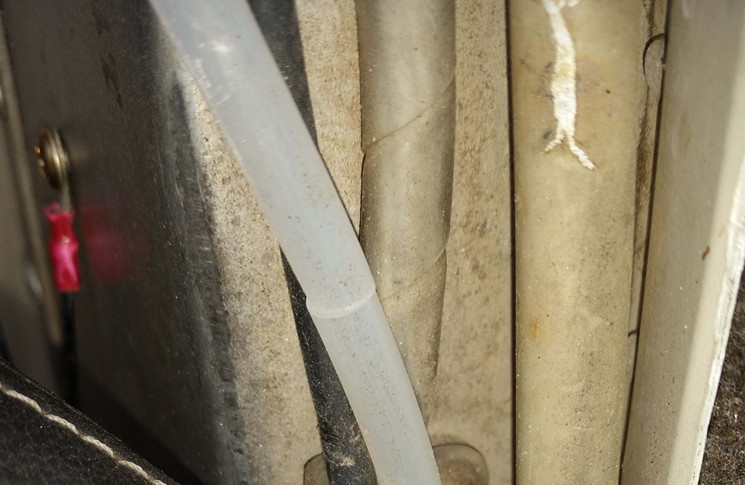 Cessna 152 pitot/static system—pitot tube unserviceable. SDR 510023127 (photo above)
Following a post-flight poor performance report, detailed inspection revealed split and leaking pitot air tube at entrance to upper instrument panel. It was noted that only the portion of tube that was exposed to direct sunlight (via the front windscreen) was found to be brittle. Tube was renewed and secured to fuselage structure as to limit the exposure to sunlight as much as possible without modifying the existing design. 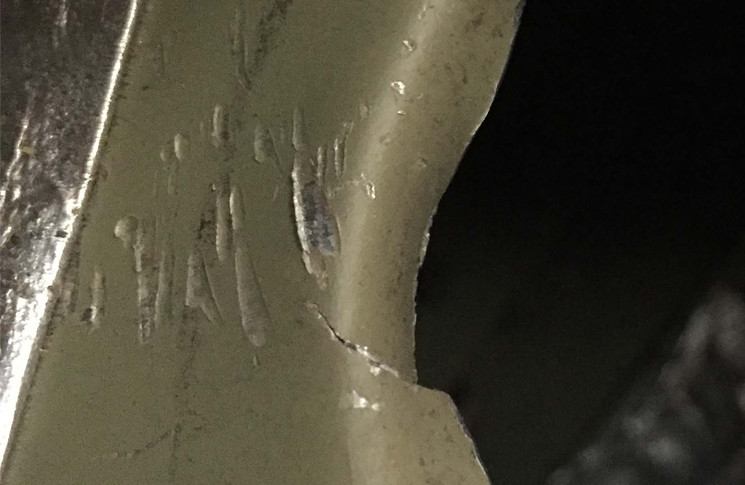 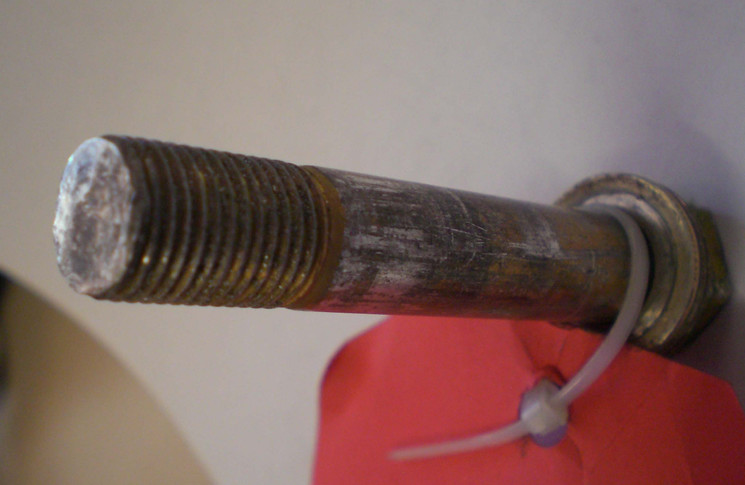 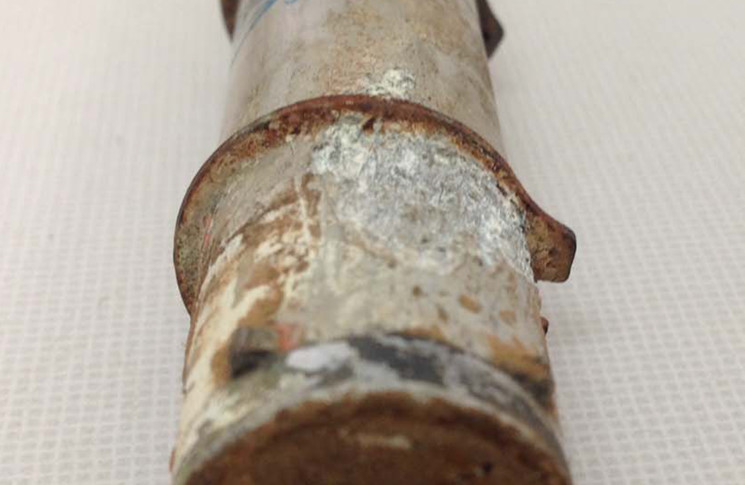 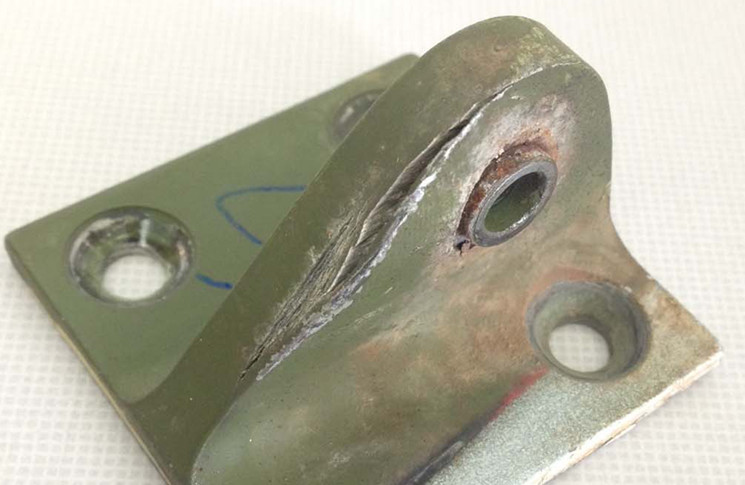 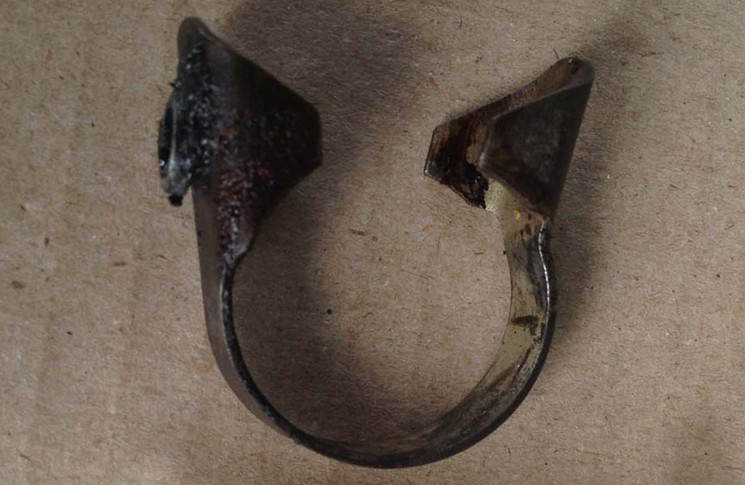 Cessna 402C fuselage wing attach fittings—fitting cracked. SDR 510022916
While conducting AD/CESSNA 400/92 lower forward wing spar fitting inspection the engineer noticed a small crack on the left wing lower aft fitting on the forward spar (P/N: 0822550-19) in the area specified in the AD. The engineer conducting the inspection proceeded to inspect all wing fittings not mentioned in AD/ CESSNA 400/92 for cracks. The left wing upper aft wing fitting on the forward spar (P/N: 0822550-21) was also found with a small crack along with the lower fuselage to wing fitting (Cessna P/N: 0811350-8). The fuselage to wing lower fitting was found with a crack approximately five inches long and was a J and R aerospace fitting (P/N: JRA-445-1), while the other two wing fittings were found with textbook cracking as per AD/CESSNA 400/92 no longer than one inch running between two rivets.

It is believed the lower fuselage to wing fitting (P/N: JRA-445-1) may have been fitted under stress due to poor design causing the fitting to be too small for the channel it is riveted in. At this stage this is only an assumption due to the nature of the crack measurements have not yet been taken. There is also the possibility of improper installation and that a hard landing that may not have been reported could have contributed to the cracked fittings. P/No: JRA4451. TSN: 2831 hours

Cessna 441 wing plates/skin—access panel corroded. SDR 510022975
During a scheduled inspection, corrosion was found in the LH upper wing panel between the nacelle & fuselage where it attaches to the rear spar at approximately CWS 70. Affected panel is a bonded aluminium honeycomb composite panel. Area has been disassembled sufficiently to gauge the full extent of the corrosion, and also to check the adjoining panel and the rear spar cap. It has been confirmed the corrosion is restricted to the composite skin panel only and extends approximately 16 inches between the top, centre and bottom laminates. A repair is being developed under Part 21. P/No: 57223011. TSN: 25104 hours/20744 cycles 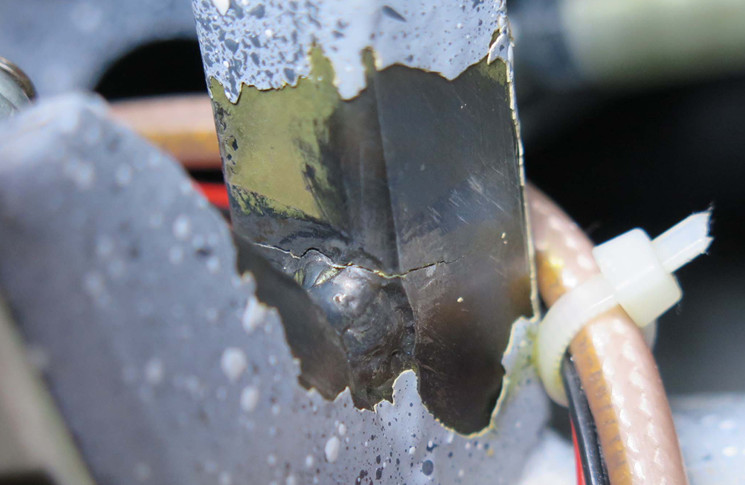 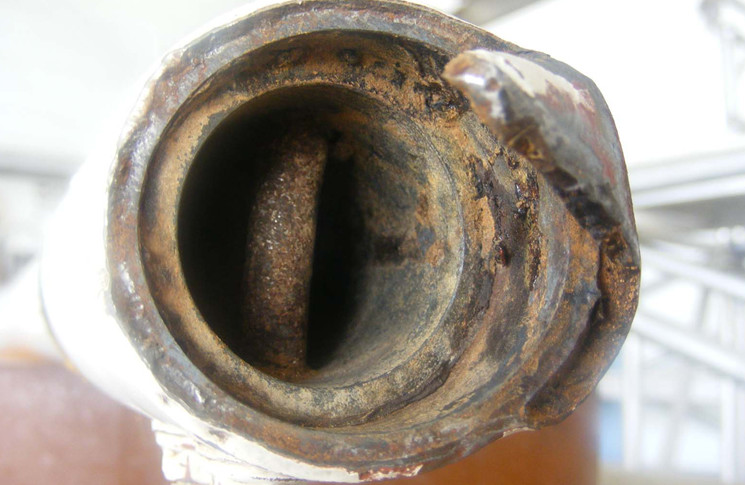 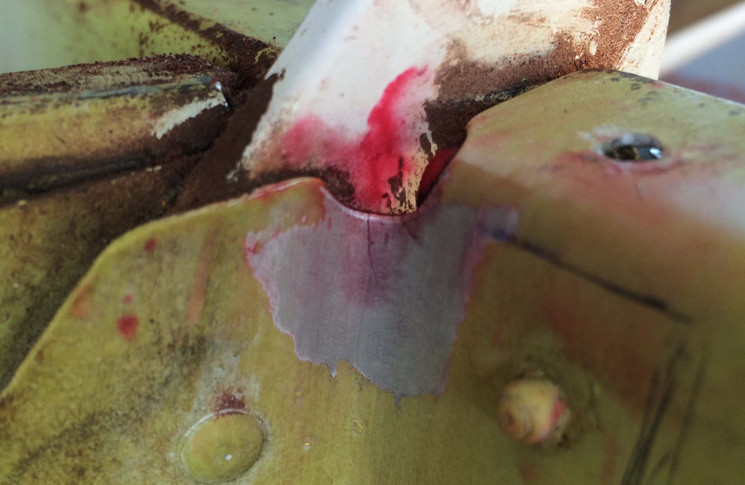 Gippsland Aeronautics GA8 rudder spar/rib—spar cracked. SDR 510023193 (photo above)
On a detailed internal inspection of the rudder structure, two cracks were found on the rudder spar extension piece in one of the corners. The part was replaced with a new item. P/No: GA8554021023. 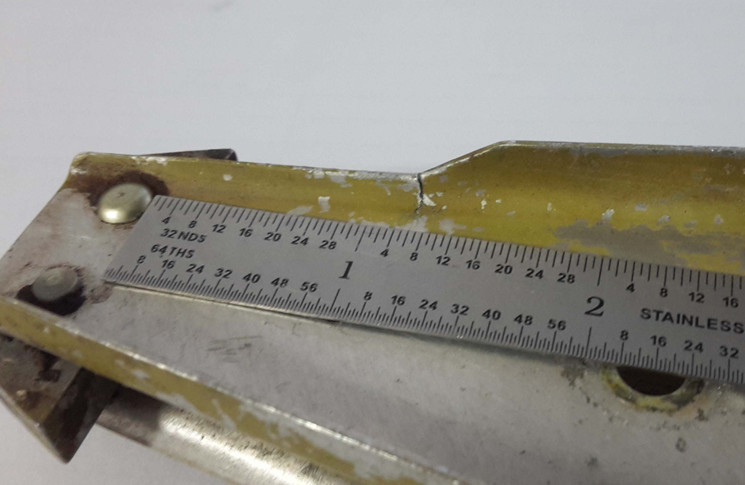 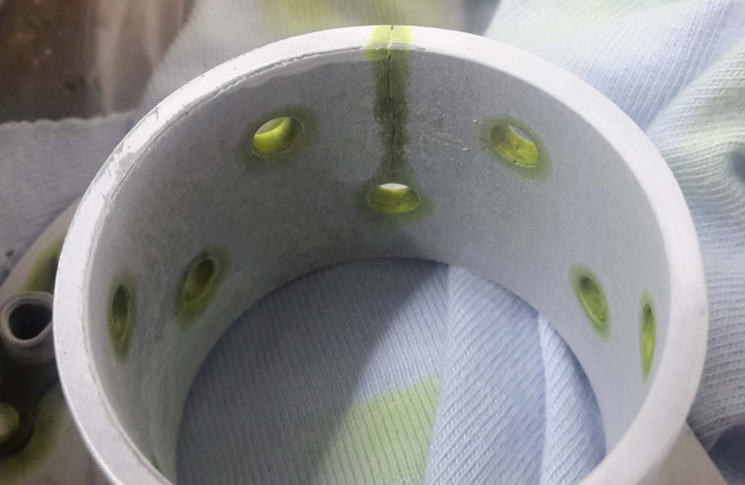 Piper PA31350 elevator spar/rib—spar loose rivets. SDR 510023058
RH elevator assembly was found to have excessive amount of working rivets on preliminary inspection for 100 hourly. A slight bulge was also noted on the spar line approximately 47 inches outboard of the butt rib. A flex test was carried out and an abnormal twist was noted in the bulge area. A further investigation has been carried out by de-riveting the aft skin, with nil cracking found. The number of working rivets is unacceptable by any means and the entire elevator assembly will be replaced. P/No: 40075021. 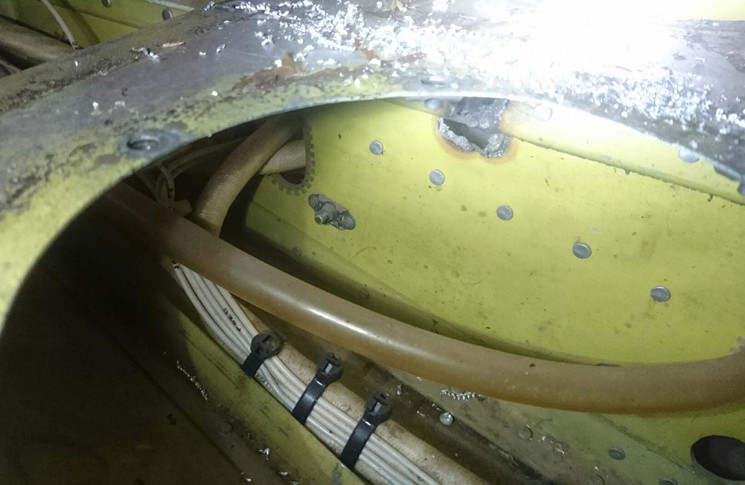 Piper PA31350 servicing—beam burnt out. SDR 510023296 (photo above)
Electrical arc damage has been found in the upper web and cap of the main longitudinal beam on the LHS of the aircraft at F/S 12 creating a hole in the area. The area it is in provides evidence of an incorrect installation process of the GPU receptacle main power terminal. P/No: 4487700. TSN: 15741 hours/10241 landings. 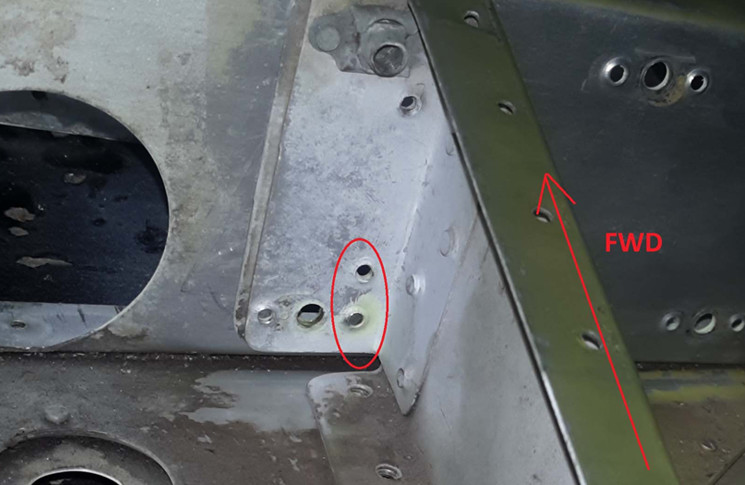 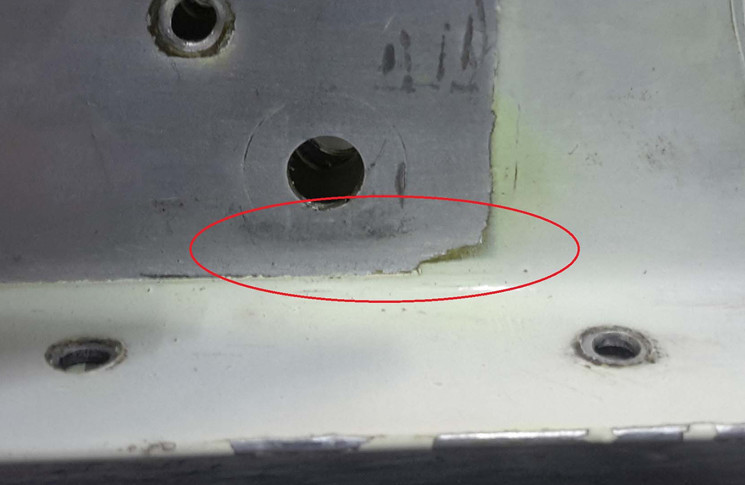 Piper PA31 ailerons—doubler cracked. SDR 510023178 (photos above)
During inspections IAW AD/PA-31/118, a minor crack indication was noted on the R/H aileron spar doubler via dye penetrate inspection. This crack indication was confirmed by further eddy current inspection. Further inspection was conducted as per requirement two of the AD and the aft rib was also found cracked on a previous doubler repair and the forward flange. 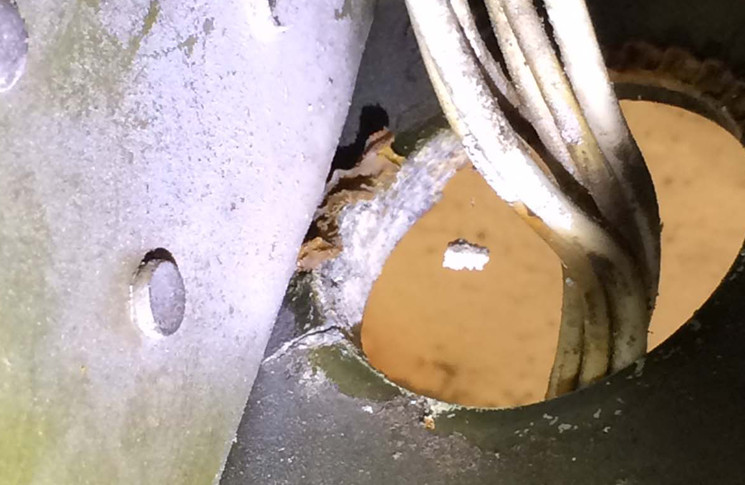 Piper PA44180 wing spar—spar cracked. SDR 510023160 (photo above)
In the course of carrying out a periodic inspection and double engine change, grommet was removed from a lightning hole in the RH wing main spar at WS 57.47. Once removed, exfoliation, corrosion and cracking was observed that had been obscured by the grommet. The grommet was removed for cleaning purposes only, exfoliation was not observed with the grommet in place.