Garrett TFE73121C turbine engine air inlet section—turbine engine FOD. SDR 510023038
During pre-flight inspection, impact damage was found on No. 1 engine fan blade. Closer inspection found a screw embedded at approximately 11 o’clock position in acoustic lining immediately forward of the fan first stage. Inspection found a screw missing from the wing leading edge-to-fuselage fairing. Investigation determined that the most likely cause was a failure of the captive nut due to age. Repairs to the damage to the blade and acoustic liner were carried out IAW AMM.

Preventative measures have included, replacing captive nuts on the fairing as soon as practical, use of thread locker when inserting screws and applying ‘creep’ markers to the screw heads to provide a visual indicator of movement. P/No: TFE7312C2B. TSN: 7686 hours/5438 cycles 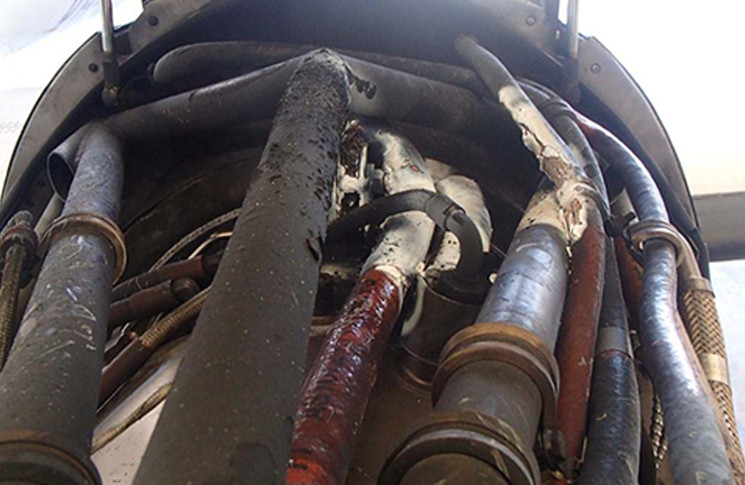 Garrett TPE33111U611 fuel divider—fuel manifold cracked and leaking. SDR 510022943 (photo above)
During post-flight checks, evidence of substantial fuel leak was noted from LH engine. Apparent source was at the top of the combustion case including evidence of combustion, external to the engine, forward of the firewall. Further damage on upper engine mount, fuel manifold and adjacent components as well as evidence of high temperatures on engine frames noted. No report of any fire warning, nor any evidence of fuel leak during pre-flight checks. Leak was traced to secondary fuel manifold adjacent to the number 10 fuel nozzle. Investigation continuing. P/No: 31024692.

Lycoming ALF5071F engine (turbine/turboprop)—turbofan failed. SDR 510023106
Climbing through FL190 after selection of climb max on the TRP, No. 4 engine surged and wound down. Nil or little vibration associated with the failure was observed. Initial visual inspection indicated some kind of ‘compressor’ failure with signs of metal debris around/exiting the bleed band actuator area—to be confirmed yet. Investigations ongoing.

PWA PT6A60A turbine engine turbine section—vane ring loose. SDR 510022909
During test flight of aircraft there was an incident which caused the pilot to shut down the engine. Aircraft has recently gone through HSI inspection of the engine. Cause identified was the maintenance error during accomplishment of SB on pre modification CT shroud housing, which then removed the need for a CT shroud retaining ring. Post modified setup not compatible with the CT vane ring installed P/N. The incident is believed to be caused by the bleed off valves. BOV are with overhaul facility currently for investigation/repair. Further trouble shooting will be required to confirm, post installation of overhauled BOV. P/No: 3043261.

PWA PW118C engine fuel and control—turboprop engine unserviceable. SDR 510023271
RH engine did not shut down with the condition lever in the fuel cut-off position. Condition lever brought into feather and then fuel cut off. After the engine was shut off, a fuel smell came through the air vents. Smoke came out of RH tail pipe after engine shutdown. During the course of rectifications, RH engine condition lever rigging checked, adjustments made to cut off push rod at HMU. Engine ground run carried out defect verified successfully rectified. Independent inspections carried out. P/No: PWC118.

Rolls Royce TAY65015 fuel injector nozzle—nozzle blocked. SDR 510023216
Following reports of No. 2 engine high in flight vibrations, an air return was initiated. During the course of troubleshooting, replacement of the HP fuel pump, fuel spray nozzles as well as BSI of the engine was carried out. Significant carbon build-up and damage was noted on the nozzles. Feedback to the OEM was provided including photographs.

Rolls Royce BR700715A130 thrust reverser—cable incorrect routed. SDR 510023189
The aircraft experienced two instances of thrust reverser failure to deploy on landing. Upon further investigation it was discovered that the NLG ground sense cable S4913802BS04226 was separated at the pulley quadrant/bracket. Slight chaffing damage evident to the bracket itself. Cable replaced and all rigging and checks carried out, aircraft returned to service. Damaged bracket was reported to OEM with repair instructions received and scheduled as per response. Possible root cause established as incorrect routing. P/No: S4913802BS04226.