Airbus A320-232 Air conditioning system—bleed air contaminated. SDR 510023568
On descent, cabin crew reported strong oil smell throughout the aircraft. The smell was most noticeable at rows 24-30. Engineering were called and inspections carried out on LH/RH ACM inlet duct, mix chamber, internal plumbing of HP air source, with nil contamination evident. The LH pack was operated with no signs of smell in cabin or cockpit. Engine Ground Run was carried out with smell still evident. Troubleshooting is still ongoing.

Airbus A320-232 Air distribution fan—fan noisy. SDR 510023528
In cruise, both flight crew detected fumes similar to electrical burning. No smoke was visible and the fumes were not toxic nor did they cause any discomfort. A humming noise was detected coming from under the floor in the right rear of the flight deck. Avionics vent sys blower and extract override were selected and the fumes dissipated immediately with no further smells. ECAM reported vent blower fault. Flight continued. On arrival, avionics extract fan was observed running louder than usual, however nil smoke or fumes. MEL applied and aircraft declared serviceable. P/No: EVT3454HC.

Airbus A320-232 Air distribution fan—recirculation fan contaminated. SDR 510023463
After 2nd engine start, both the cockpit and cabin had a strong foul odour that lasted for 3 minutes. The odour was also present at engine shutdown. APU cooling fan duct and load control valve were removed and inspected for oil leaks and contamination with nil found. Engine Ground Run carried out on both engines with nil odours present. Re-circulation filters were then replaced and APU bleed air operated with packs on. No odours were present in the cabin or cockpit and the aircraft declared serviceable.

Airbus A320-232 Brake—impeller broken. SDR 510023394
On arrival, flight crew noticed that the wheel temperature on the No2 wheel was high compared to the other wheels. Engineering called and wheel assembly inspected. Engineer identified that the brake fan impeller blades had sheared and the resulting shrapnel had damaged and become embedded in several areas of the wheel and brake assembly. No 2 wheel and brake assembly were replaced and the aircraft was declared serviceable.

Airbus A320-232 Control column section—sidestick loose connection. SDR 510023490
On selection of Autopilot, flight crew noticed that FO side stick locking solenoid did not engage. During the course of troubleshooting, electrical connector 12CA2 was found disconnected. Other connectors in the vicinity were found intact. The assembly was removed, inspected and reinstalled IAW AMM. Operational and independent inspections were performed with aircraft declared serviceable. P/No: D27310002000AQ.

Airbus A320-232 Engine oil quantity—turbine engine low pressure. SDR 510023347
During take-off run, prior to airplane reaching V1, pilot monitoring observed, engine #1 oil quantity had dropped to 5.5 Quarts (within green band). Take off continued as there was no ECAM activation. Crew kept an observation on the quantity that climbed to 8 Quarts then to 9.5 by FL300. In the interest of the safety, diversion to suitable airport was planned during which oil quantity continued to fluctuate. After landing, inspection of No #1 engine found some engineering issues. Flight declared AOG with rectifications planned. 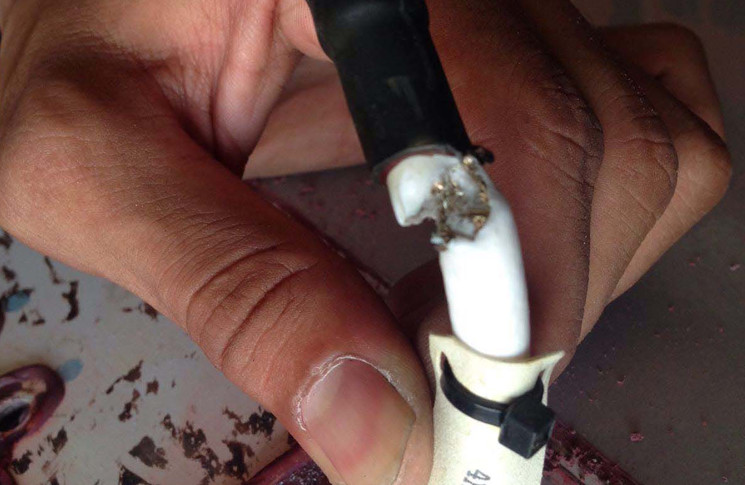 Airbus A320-232 VHF communication system—antenna corroded. SDR 510023318 (photo above)
While undergoing heavy maintenance, VHF antenna was removed corroded. While removing antenna, co axial cable was also noted to be cut. No apparent cause of cable cut was established however cable connector will be replaced during the grounding. P/No: 240389. 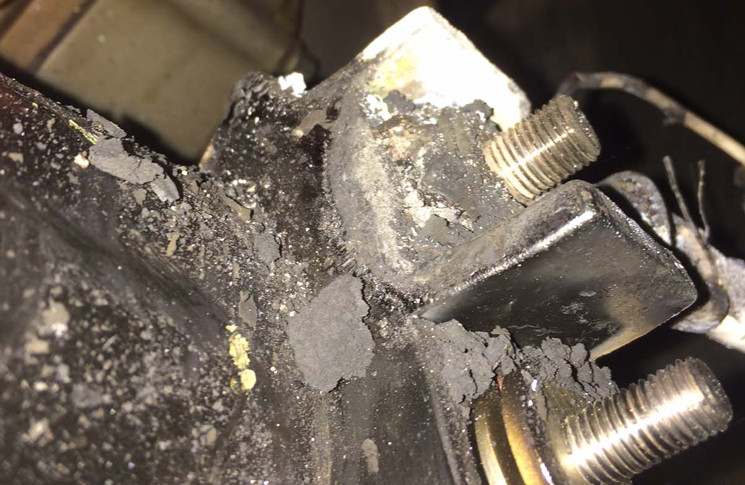 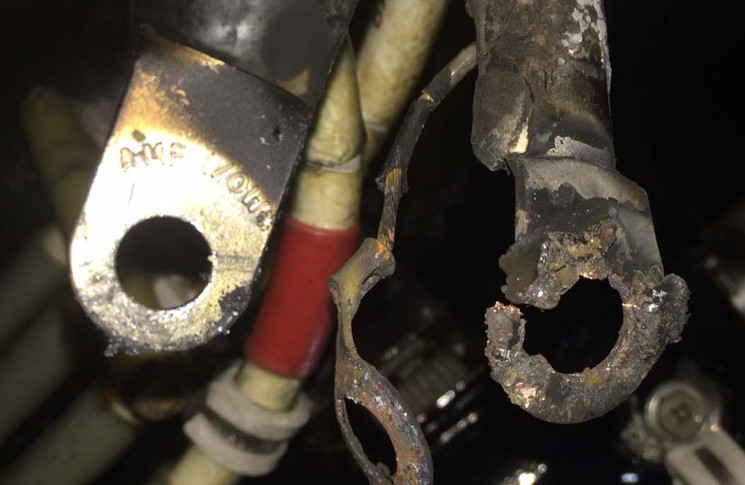 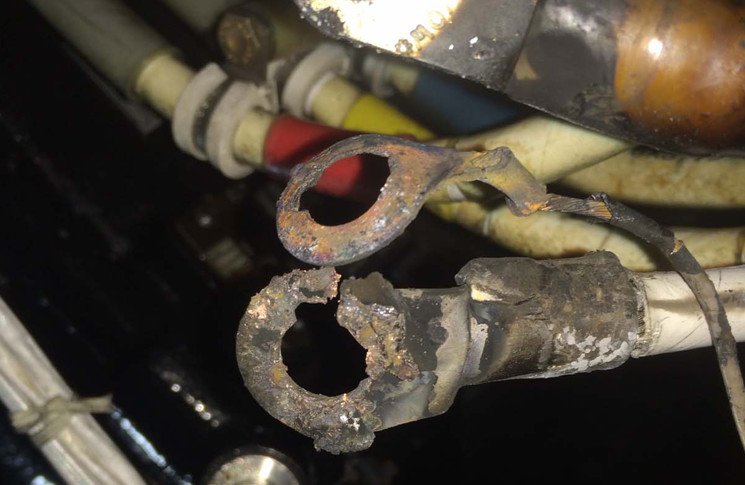 Airbus A321-231 APU start/ignition system—starter motor welded. SDR 510023570 (photos above)
After landing at destination, APU failed to start after 2 attempts. The APU last leg report faulted the APU starter motor (8KA) and MEL 49-10XX was applied. Carried out TSM 49-00-XX, identified an open circuit in the starter motor. On inspection the starter terminals were found welded to the starter motor due to arcing. MEL remains in place pending wire and starter motor replacement. P/No: 27045062. 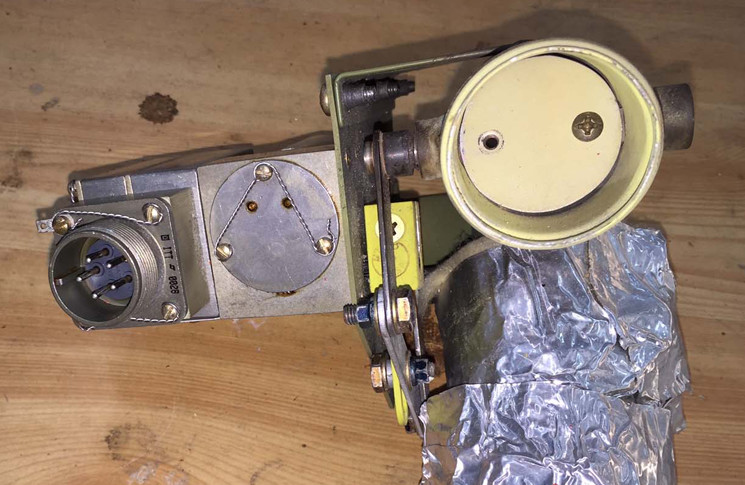 Beech 300 Air distribution system—bypass valve contaminated. SDR 510023485 (photo above)
Suspect strontium chromate residue found inside the right hand bleed air bypass valve. Screw missing from right hand bleed air bypass valve plate. The strontium chromate residue observed within the duct housing is likely to have originated from degradation of the corrosion protection coating applied to the inner surface of the valve duct housing. The missing screw was possibly due to insufficient locking on the attachment screw allowing the screw to work loose and detach from the plate and shaft. To rule out fleet wise contamination, fleet wise inspection has initiated. P/No: 10155008725. TSN: 7396 hours/6473 cycles. 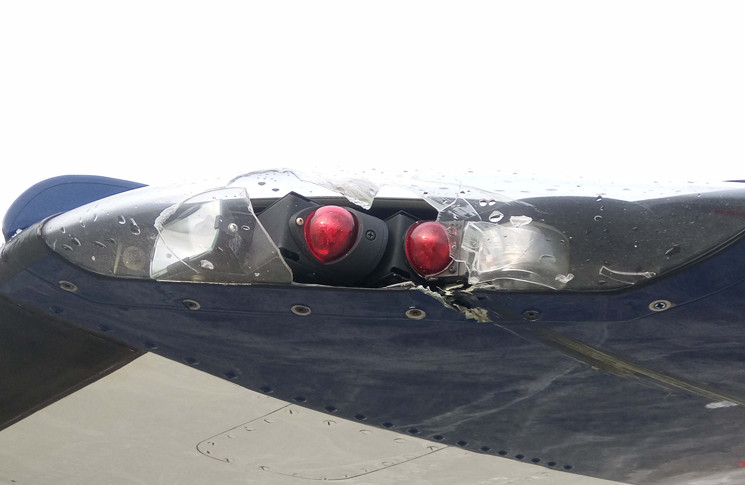 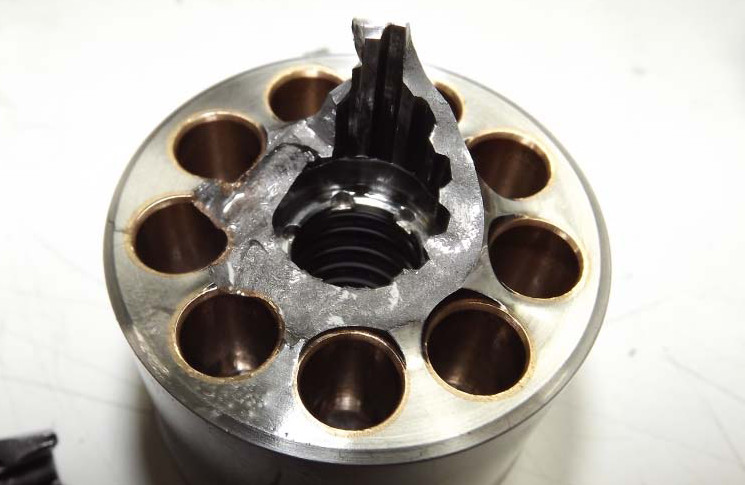 Boeing 737-838 AC inverter—inverter failed. SDR 510023423 (photo above)
During end of heavy maintenance check, after power being connected to the airplane for some time, heavy smoke and burning smell was noticed that was traced to burned static inverter with associated CB tripped on P6 panel. Inverter was inspected at the repair facility and was declared beyond economical repair. Inverter was found with burnt Flyback power stage. Failure mode remains unknown and no recommendations at this stage. P/No: 100201022090.

Boeing 737-8FE Ground proximity system—EGPWS intermittent. SDR 510023401
In flight, flight crew reported GPWS INOP light illuminated along with TERR FAIL on both NDs. No Automatic height Callouts on approach. Relevant FIM carried out, GPWS BITE carried out with nil faults found. Operational test of the GPWS carried out satisfactory IAW AMM. No faults found. Considered transitory. There have been no further occurrences. Honeywell has determined that the issue is being caused by EGPWC Central Processing Unit (CPU) loading, and has identified a software solution that optimizes the software throughput in order to improve processor efficiency. The software change is expected to reduce nuisance fault occurrences by freeing up the CPU to process more ARINC 429 inputs during periods of high input loading. No functional changes are being made to the EGPWC and the software upgrade will be aircraft loadable. Vendor, OEM SB and SLs are due soon. P/No: 9651690055. TSN: 41448 hours/24186 cycles.

Boeing has determined that the TCAS 7.1 computers can raise nuisance faults which are usually not the result of an actual internal TCAS computer failure.

The TCAS 7.1 computer has the potential to experience a nuisance fault for the switch card diode monitor which causes an internal reset and a temporary TCAS FAIL EICAS message or annunciation on the navigation display. This fault occurs primarily on the ground, when the unit is likely to be in standby. Only about 1% of the recorded faults have been observed to occur while the unit is airborne. If the self-test passes and the TTR-2100 PASS/FAIL Light Emitting Diode (LED) remains green, the TTR-2100 should not be removed. Necessary instructions in this regard have been given to the AMOs and maintenance crew.

Boeing 747-438 Passenger station equipment system—seat burnt. SDR 510023429
A phone was dropped into the seat. The passenger was advised not to move the seat. He moved the seat and a fire ensued. The fire was extinguished with a BCF. The smoke dissipated and the flight continued to destination.

Boeing 747-438 Passenger station equipment system—seat odour. SDR 510023431
During flight, smoke from a charging mobile phone caught attention of the cabin crew. Phone started emitting smoke when it was crushed by passenger while straightening his back rest for a meal service. Smoke and debris removed from the seat. Seat functional test carried out IAW AMM. Seat covers deodorised and strong smell removed.

Boeing 7878 Passenger station equipment system—pivot disengaged. SDR 510023389
Seat pan link pivot pins found missing from five economy class seats. It is believed that the loss of the pivot pins is due to set screws becoming loose, and over time and operation of the seat recline, the pivot pin disengages and falls out. Missing pins replaced and set screw tightness checked across the aircraft and retightened as required. Plan in place to inspect the remaining aircraft and rectify accordingly. Additionally, all set screws will be removed and reinstalled with application of Loctite to prevent further occurrences.

Bombardier CL604 Landing gear retract/extension system—valve out of limits. SDR 510023457
During routine functional checks of Air Driven Generator (ADG), priority valve was found to be exhibiting out of AMM operational limits. Same was replaced. In consultation with OEM, it was agreed to review the requirement for a scheduled task interval to be added to the maintenance program. This could help arrest latent failure of the valve. Fleet inspection also completed with failed valves replaced. P/No: 46193. TSN: 9343 hours.

Bombardier DHC8-402 Fuel boost pump—ejector pump partially separated. SDR 510023536
On departure, fuel pressure caution light illuminated. Light went away after the auxiliary pump was selected on. On investigation, internal flapper valve in primary ejector pump was found detached causing partial blockage of fuel feed line. Failed component is the subject of an Airworthiness Directive which mandates the installation of a containment device in the fuel manifold IAW Bombardier SB 84-28-16. The effect on fuel flow is dependent on whether the liberated flapper is contained upstream or downstream of the Auxiliary Pump Outlet. The containment device ensures that the flapper is contained upstream of the junction. Subject aircraft was post SB. P/No: 2960008102.