Home Close calls In sickness and in health 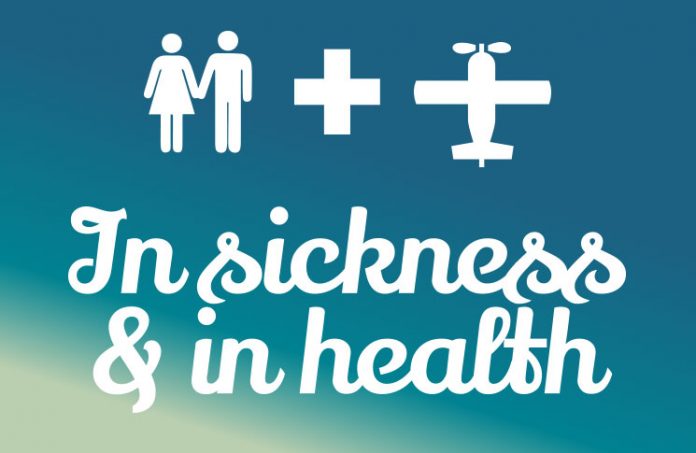 My partner’s and my four-year dream was about to come to fruition—we were departing on a 78-day flight from Brisbane through northern, central and Western Australia. In the excitement of it all little did I know that I would soon have a front-row, right-hand seat in a real-life emergency.

This is a story with important lessons for pilots and partners of pilots. I met my partner two years before this event, and, after a lengthy friendship, we became a couple. Almost straight away, I discovered his passion for flying, which was challenging, and exciting, but most of all scary to me.

My perception of light aircraft was an all-too-common one—‘aren’t they dangerous?’ I wondered how I would react when he invited me to go flying with him. Being the type of person who wants to know all the ins and outs, I was interested in his quest and all the things that went into flying. It placed a whole new dimension on our relationship as I came to understand that his psyche, quiet demeanour, motivation, and attitudes were reflected in his role as a pilot. He’s an individual who places extreme importance on maintaining a strong focus on healthy diet and high physical fitness levels.

The privileges of holding a Class II medical licence, a PPL and NVFR for a number of single-engine type aircraft are so important to him. When the opportunity came to go flying, I accepted the invitation with some trepidation. At the airport he checked the plane thoroughly, gave a safety brief, then asked me to hold a book/manual in a binder and proceeded to read aloud from the pages and do things with switches, dials etc.

‘Oh my goodness,’ I thought, ‘he’s reading out of a book, learning as he goes!’ Then, after seemingly a long time and so many checks, again from this manual, he asked me, ‘Are you OK to go? We are about to line up for take-off and if you don’t want to go, please say so now, that’s OK.’

At work the next week, I told all my colleagues about how scary it was, his reading out of a manual. Patiently, he took me through a whole lot of detail in plain simple English as the joy flight across Brisbane, out over the bay and back to Archerfield proceeded. On landing it was so smooth and gentle. Almost straight away we went flying again, both locally and long distance.

My confidence in him increased exponentially over this time as I sat next to him travelling in these small aircraft. I also enjoyed the privilege of flying with him on a couple of Angel Flights, and saw first hand what this meant to him. We planned an outback trip through Queensland and northern Australia, which was to be the holiday of a lifetime. As our tour time neared I watched, questioned and enjoyed immensely participating in the trip preparation. As he went over all probabilities again and again, I never imagined that anything could spoil this dream holiday.

A beautiful day dawned. The aircraft was packed and pre-flighted, with the paper work and all last-minute checks completed. The time had finally arrived! ‘Good to go captain,’ I said as we departed. We climbed, headed west, and made a couple of stops on the way to fuel and drop in on an old family friend. We had clear skies and fair winds, with a fabulous view of western Queensland.

The camera kept rolling. All was going to plan. I could see first hand the value of all the planning, and as we flew west, my partner would explain in basic terms what was happening: navigation, communications, controlling the plane on descents, joining the circuit and other things that made all this a reality. He had me directly involved in many facets of the flight, although I did have occasional trouble sighting the airfield and determining which way the windsock was blowing.

On the fifth day, we awoke to another beautiful clear, but somewhat windy, day. Departure was earlier than expected, so we had to rush to breakfast, get to the airport and start the long track north to get us to the Gulf by late afternoon, our next overnight stay.

The plan was to land and refuel about a third of the way there to ensure that the fuel margin was still good on arrival at our destination. On arrival, the windsock was flapping all over the place and sometimes was nearly horizontal. With very pronounced wind-gusts as we were about to land, a sudden and major change forced a go-around.

The second landing was successful and we taxied to re-fuel. Then my partner said, ‘I don’t feel well in the tummy.’ After a lengthy conversation, it was decided we would depart with an alternative stop planned if the queasiness didn’t abate. I felt a little uneasy, but on take-off everything seemed normal and we climbed into a beautiful blue sky.

Some 20 minutes after take-off, at 4500 feet, my partner said suddenly, ‘I am feeling very ill, need to get down urgently, we are going back.’ He became physically sick and turned the plane around to head back to where we had re-fuelled. He began to perspire profusely, was dry retching and become very pale. I watched in horror as his condition deteriorated and listened as he made a number of seemingly incoherent statements about actions, asking questions—sometimes repetitively— about heights, airport elevation and some instrument settings. I questioned him as to why he didn’t land down there on that road and received short stilted answers.

We flew on, and as unobtrusively as I could, I reached for my mobile phone to text the kids to tell them we were in trouble and that I loved them. Suddenly we began descending, but I couldn’t see the airport anywhere. Again the questions began: ‘Do I have the airport in sight? What elevation is it? Can you see the windsock? Which way is it blowing? Keep an eye out for traffic.’

I finally saw the airport, but there seemed to be no pattern to our approach and he was asking me to ‘be quiet, just answer questions’. I was having information overload and was frightened, but trying to stay calm.

Turning onto a long final, he was hunched forward with his stomach cramping, sweating even more, very pale and absolutely fixated by the grip on the control yoke. Down and down we went as on so many other landings before, but I wondered if we would make it. I was still frightened and hadn’t sent any text messages. Was it too late? The landing in blustery conditions was bumpy, but quite good given the situation. I didn’t care, only that we were safe.

The plane was taxied, shut down and secured. My partner staggered around and leaned against the cowling absolutely exhausted; mentally and physically drained.

On arrival at the local hospital the locum on duty (a part-time DAME) immediately ran a host of tests and my partner was effectively and rightfully grounded. With the help of prescription drugs and saline drips his body recuperated and he became his normal self again.

The tour was over and we returned to Brisbane on a commercial flight. Extensive medical tests by a range of specialists concluded that this was a one-off episode. The dream might have been badly interrupted, but most importantly, we kept our lives thanks to the skill of the pilot. He, under severe distress, applied the lesson: in emergencies—aviate, navigate and communicate. I subsequently went flying on a few trial instructional and partners-of-pilot type flights and regained every confidence I had before and went on to enjoy so many more uneventful flights with the man who has now become my husband.

Important lessons I would pass onto partners of general aviation pilots are to: involve yourself in all that they are doing to learn how it all works; if your partner’s flying school offers one day courses, enrol and do it; and consider before each flight whether your partner is ‘fit to fly’. And most importantly: trust your instincts. I wish I had been more assertive the first time about staying on the ground, so that the dream of a lifetime didn’t become a near disaster.