Airbus A320-232 Rudder miscellaneous structure – protection strip debonded. SDR 510023751
During walk around, it was observed that the rudder upper left hand lightning strip has peeled back from structure and exposed into air stream. Damaged found out of limit and EO requested for permanent repair. Damaged rudder lightning strip had the potential of becoming a hazard to Aircraft and or persons.

Airbus A330-243 Escape slide—slide disengaged. SDR 510023843
Crew reported Door L1 slide raft dislodged when door was being closed for departure. Slide inspected and found quick release pins had migrated out of the release bars, allowing the slide to fall out of the release bars on to the cabin floor. Slide removed, pins and slide inspected with nil faults. Slide reinstalled as per AMM 25-62-XX. Aircraft released to service. Cause of the defect remained in determinant. OEM advised no similar events have been reported in the field. In addition, the removal of the pins would not affect the slide deployment as it is retained by the Girt Bar in the event of an emergency, thus risk to safety & airworthiness is minimal. P/No: 7A1508125. TSN: 5498 hours/1436 cycles

Airbus A380-842 Air distribution system—oxygen system leaking. SDR 510023750
Passing FL 310 on climb, ECAM warning of duct leak followed by Pack 1 and 2 Fault was presented. ECAM actions carried out, with descent to 10,000′. Air turn back to departing base initiated. A leak was evident at the Ozone Convertor Coupling, believed to be the trigger for the Overheat and Leak ECAM Messages. The unit was removed, inspected & re installed with new duct clamp. Leak with APU Bleed still persisted. The unit was again removed and the mating flanges more closely inspected for damage. Minor scoring and distortion was evident. Necessary rectifications planned. P/No: 23417981. TSN: 19227 hours TSO: 19227 hours

Boeing 737-8FE Autothrottle system—autothrottle disengaged. SDR 510023888
Flight crew reported auto throttle disengaged during take-off. Manual thrust was then used. Tried to re-engage in climb and cruise but disengaged again after a short while. Thrust lever#2 was observed to move but the #1 was not affected by Auto Throttle commands. Flight fault history showed multiple events of Maintenance Message 22-31687. Auto Throttle DC 1 Circuit Breaker cycled as per FIM 22-32 Task 819 and servo motor test carried out satisfactory. There is no history and there have been no repetitive occurrences. Three similar reports received. 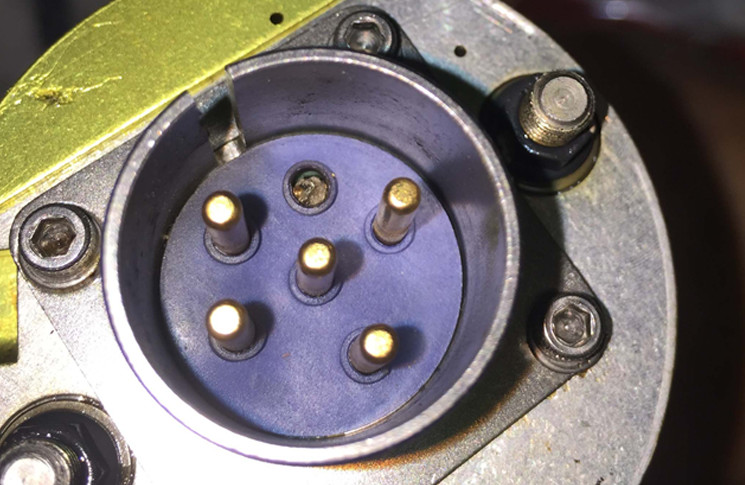 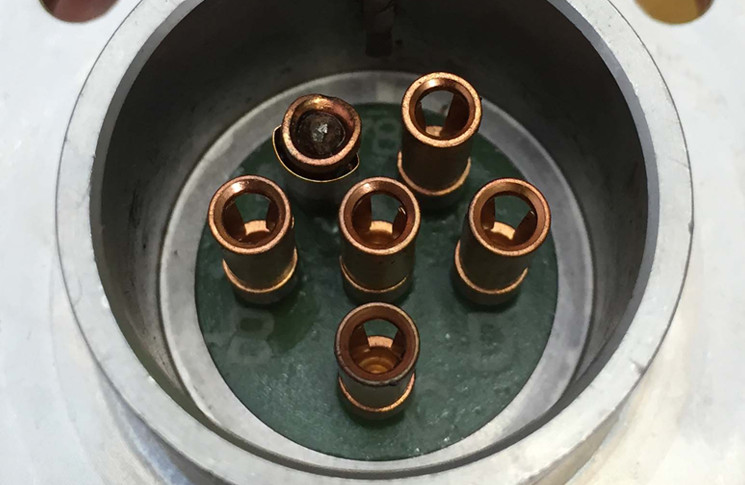 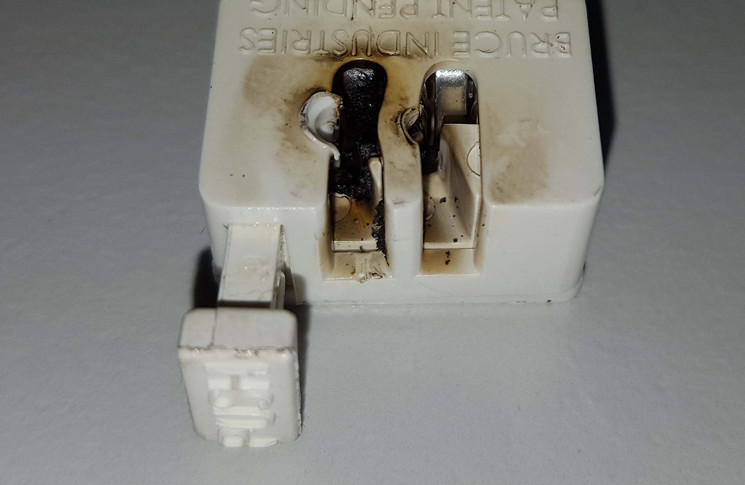 Bombardier DHC8-202 Passenger compartment lighting—lamp holder burnt. SDR 510023876 (photo above)
During pre flight checks, crew reported burning smell in cabin and around the radar console. Smell was traced to X2 burnt cabin sidewall fluoro tube holders. Affected tubes removed from holders and MEL applied. During the course of rectifications, suspect lamp holders were replaced. One was found badly burnt where as the other was cracked. System tested serviceable. P/No: BV033021148BV033001248.

Fokker F28 MK0100 Fuel storage—jet pump contaminated. SDR 510023877
At top of aircraft ascent, COLL TK 2 LO LVL warning presented with approximately 1,800 kilograms (kg) of fuel remaining in each wing Tank. Fault self-cleared approximately 5 minutes after its occurrence. Ground checks verified serviceability of low level warning system. Continued investigation identified debris inside of fifteen out of eighteen of the collector tank # 2 Jet Pump Tube, Venturi Nozzles. As such, all debris was removed from Jet Pumps # 1 to 11 and the pumps were cleaned. All debris removed from Jet Pumps # 12 to 18 and then cleaned the pumps. All affected hoses of all pumps were then reconnected, and collector tank # 2, Jet Pump operational check was carried out without fault. As continuation of Fokker Fault isolation, right hand collector tank filter / bypass check valve was inspected , subsequently identifying further debris, replacing the valve. Investigations started.

Fokker F28 MK0100 Pressure regulator valve—pipe cracked and leaking. SDR 510023743
Just after leaving FL 350 on descent, CABIN ALT alert presented. After stabilizing below 10000 feet, completed all relevant checklists, re appraised the situation and conducted the approach. That approach resulted in a go around and the second approach led to a successful landing. Investigation revealed poor condition of flare in static line on primary outflow valve as well as a cracked flare in static line on secondary outflow. Both pipes were repaired on site IAW approved data. Aircraft pressurisation checks satisfactory. No further action has been recommended at this stage. The issue has not re-occurred and therefore it has been considered as an isolated event. 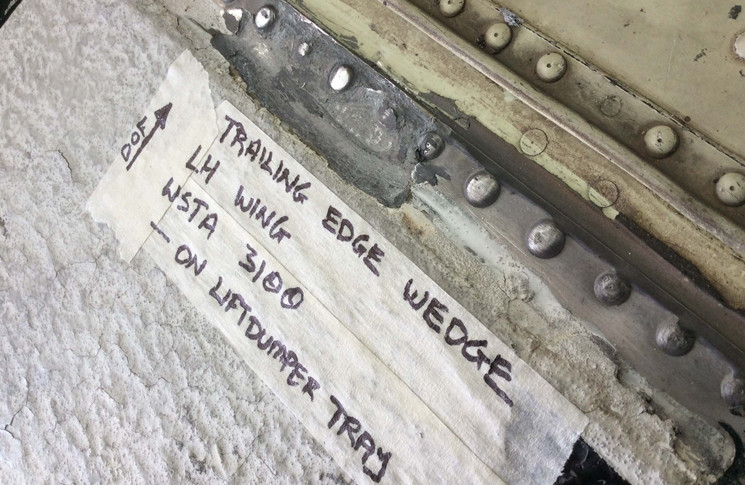 Fokker F28 MK070 Fuselage plates/skin—skin cracked. SDR 510023820
During base checks, two cracks on the right hand side of the Fuselage, emanating from a counter-sunk rivet, approximately 100 Millimetres (mm) forward of Frame Station (FSTA) # 17011, approximately 14 mm below the skin splice between Stringer (STR) 46 and 47 were reported. Non-Destructive Testing (NDT) measured the crack to extend approximately 9 mm from the top of the associated rivet to the edge of the Fuselage skin and approximately 3 mm long from the bottom of the Rivet.Repair not covered by OEM manuals so an approved repair has been requested. Same will be embodied after receipt. Reliability Engineering investigation into this Incident has commenced. P/No: 17011. 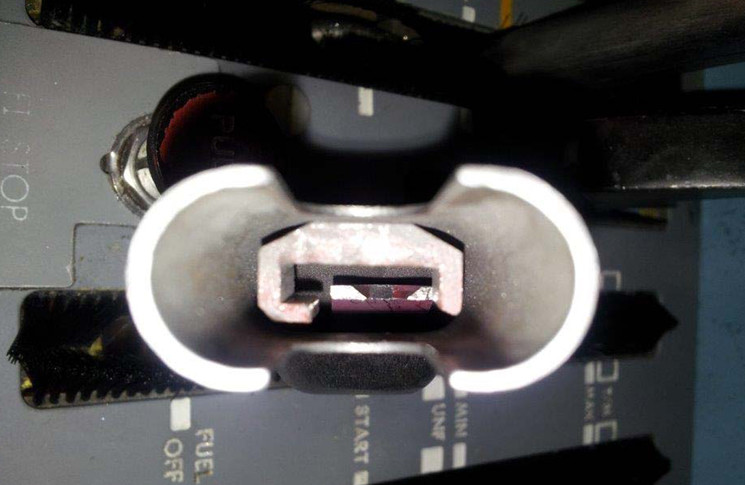 Saab SF340B Power lever—condition lever cracked. SDR 510023702 (photo above)
During start, when moving LH condition lever to the start gate detent, upper part of the lever separated from the lower half. A control quadrant replacement was carried out. P/No: 64198.