Home Close calls At any second

I was based at Wewak on the north coast of Papua New Guinea in the early 70s. Wewak was significant to me personally as my father, an engineer, had landed there during WW 2 and had helped build the airstrip that we were using.

I had been sent to Vanimo, a base to the west of Wewak, in order to route endorse a new pilot. It was a requirement that new pilots to an area had to be trained, and then checked over each route at least five times before being able to fly the route solo. The majority of the work out of Vanimo was to service government border stations located to the south, close to the West Irian border. The base aircraft was a Cessna 207, which was not a startling performer even at sea level, and was a challenge when operating with any significant load out of Telefomin and Oksapmin, both around 5000 ft AMSL.

The load that day comprised a full one of building materials. As a result, the trainee was allowed to sleep in while I flew the sortie to Imonda, a border station to the south. The right-hand seat had to be removed to allow the longer pieces of the load to be carried and the only passenger seat that could be carried was the ‘dickie’ seat in the very rear of the aircraft. We always tried to carry extra seats if they fitted, in case the opportunity to carry a cash fare arose. The load was duly secured and the flight to Imonda proceeded. Being the dry season, the weather was good, which is fortunate as being situated on the Sepik River plain in the catchment area, there were no significant landmarks to be seen if there happened to be a layer of low cloud that often covered the whole area during the wet. Communications were via AM HF radio with the flight information service (FIS) at Wewak. Only one frequency was used to cover a fairly large area and it often became congested necessitating at times, several repetitions of a call before contact was successful.

After unloading, the patrol officer in charge of the station advised he needed to be in Vanimo, so I fitted the ‘dickie’ seat and he loaded up. Being a local, he was quite small in stature which is fortunate because the dickie seat is not the most comfortable for one with long legs. With nothing in front of him, at least he could stretch his legs out. His meagre baggage went into the nose locker.

Departure proceeded and a right turn completed to establish on track to Vanimo. During the climb, at about 3000 ft, I heard/felt a jolt and the whole aircraft began to vibrate rather severely. To say it grabbed my attention is an understatement. My cigarette went out the open window (it was hot) and I began troubleshooting. Nothing changed the situation. Significant power had been lost and climbing was not an option. At best glide speed, the aircraft was descending, so somewhere to put down was a number one priority in case there was insufficient altitude to make it back to Imonda, to where we were now heading. We carried early model emergency locator transmitters (ELTs) which were attached to a windscreen pillar with Velcro tape. These were activated on impact and could be activated manually by a sharp whack on the body. I removed the ELT, gave it a whack and was pleased to note the flashing light indicating transmission. I tossed it up on the glareshield hoping that it would survive even if the passenger and I didn’t. I then called Wewak with a mayday. After the third repetition of the call sign had been transmitted, Wewak replied in a somewhat cheesed off voice saying ‘EGR, go ahead, go ahead’. He’d been operating another frequency at the time of my initial call and had missed the first part of the mayday. I repeated the message including the position, intentions and persons-on-board and continued tracking towards Imonda. There was a dry riverbed below that might suit if the airstrip couldn’t be reached. Wewak began clearing the frequency and I also heard him contact a RAAF Caribou that was tracking down the coast from Vanimo to Wewak and directed him to the Imonda area just in case. As usual, the Caribou had more than sufficient fuel for such a diversion. 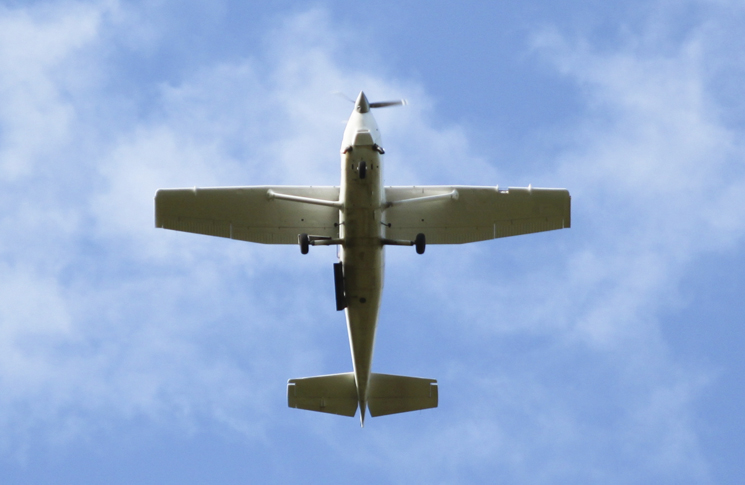 Not long after, the engine stopped and the propeller froze. Obviously, some catastrophic internal failure had occurred and that was that. No more decisions now. It was the riverbed or nothing.

I advised Wewak and planned the new approach, or at least I thought I did. I’d forgotten about the trees along the river bank. These were up to and over 100 feet high and I was overshooting my aim point by a fair bit. The passenger was aware of the situation, but I told him to tighten up his seatbelt and hang on, smiling encouragement at him. The flaps on the C207 are of the pre-select electrically operated type and I realised that in order to dump the flap on touchdown, I would have to leave the master switch on. Not a good situation. I advised Wewak shortly before touchdown of the situation and advised that I would call again after landing. The optimism of youth!

Good luck came back. Closer to the ground, I noticed that the nice looking sandbank that I was aiming for was actually covered with huge boulders that had not been obvious initially. With no other options now, I selected full flap and began to flare. Just on touchdown, I dumped the flap which raised the nose as expected and kept on with the flare. The nose wheel struck a boulder and tossed the aircraft back into the air. I kept the attitude in the flare and flew for wings level. In what must have been seconds, I felt the aircraft decelerate rapidly and start to nose over. It didn’t go far before dropping back onto the main wheels in a pretty much level attitude.

I turned around and noted that the passenger was fine, so I told him to evacuate (‘get out!’, actually) – he didn’t need another invitation.

At that time, I heard static from the radio. I tried to call Wewak and they responded. He sounded a bit relieved and I found out later that his attempt to quit smoking was a failure from the time of the initial mayday. They confirmed that the Caribou was inbound with an ETA. I switched the master switch off and got out. The aircraft was missing the nose wheel (it was subsequently recovered). The forward fuselage was resting on a sandy riverbank in a level attitude. There was no airframe damage other than the nose wheel and a ding in the right hand wingtip from when the aircraft tipped forward during deceleration.

I turned the ELT off, recovered my nav bag and lit a smoke, as one did in those days. The passenger was fine and did not seem fazed at all. We sat around and chatted until we heard the sound of a heavy aircraft approaching. I returned and turned on the master switch, hearing the radio come to life. At that time, I looked towards the sound and saw the Caribou, fairly low, heading towards Imonda. I called him direct and gave directions to our position, which he duly located. He advised that a helicopter was being arranged from Telefomin to pick us up and was due before last light. I shut down for the last time and broke out the survival pack looking for a machete with which to cut wood for a signal fire/wind indicator.

Sometime later, some locals appeared coming from the downstream direction. They were actually from Imonda. They’d heard the engine quit and taking a bead on where they lost sight of it, walked up the river knowing that that was the only clear area around. It was good to see them and the patrol officer was very happy. Eventually, we heard the helicopter and lit the fire we’d prepared. Heaping on green vegetation gave the desired result. We arrived back in Vanimo on last light and headed for the local where we met the Caribou crew. I was having the day off the next day anyway, so there was no beer curfew!

Department of Civil Aviation investigators arrived the next day and I completed the paperwork and interview. They criticised me for not switching off the master before touchdown, something I accepted. They wanted the engine for a strip-down examination, but that was all. I was stood down pending an investigation, which suited me. The beaches of Wewak are beautiful and deserted mostly. My enforced holiday lasted three days and I was sent to head office to have tea and bikkies with the chief pilot and to collect another C207 to ferry back to Vanimo.

The cause of the failure was a failed big end bolt; the reason for its failure was unclear. The crankshaft journal had struck the bottom end of the con rod when the bolt let go and it was forced up through the crankcase, punching a hole in the crankcase and removing a magneto. I was eventually cleared back to the line following a flight check.