During routine maintenance, it was identified that support bracket and drain line clamp block assembly were missing from the RH pylon fixed fairing. It is being suspected that lower pipe (D717-10036-000-00) not being clamped, free to wear against the lower rib, elongating the holes was the contributory factor. Rework of the lower rib 14 was carried out to ensure there were no sharp edges. A new clamp block assembly was installed.

Before departure, difficulty was faced in locking the aft cargo door. The locking mechanism was lubricated and door was able to be latched safely. No interference with door latch interlock was noted. In flight AFT CARGO DOOR message on the ECAM presented. A precautionary air turn back executed. On ground, door confirmed locked. MEL applied.

Just prior to boarding, crew reported a strong fuel smell evident throughout the aircraft. Flight was subsequently cancelled. Later on, it was discovered that APU primary fuel manifold fitting is leaking. MEL 49-01 was applied, RTS completed. Detailed rectifications planned.

Passing 9000 feet on climb, FO side altimeter started trending down (eventually settling at 8300 feet). The FO ASI indicated zero knots and remained there for the rest of the flight and CB E28 popped. E28 able to be reset IAW company policy. Later on it was discovered that CB E28 had contacted airframe. Subsequent arcing melted the static line thereby causing leakage.

Flight crew reported that on ground, the Capt.’s and F/O’s display units lost FMC #1 and FMC #2 information for a brief second before returning to normal. Fault Isolation Task 34-61 / 801 performed with nil faults evident at this time. FMC # 1 and # 2 reset performed. Failure is a known issue to OEMs which was initially thought to be caused by radiation induced upset however could not be reproduced in a controlled environment. Root cause is still being investigated.

Crew reported flap asymmetry when flap lever selected from 10 to 15. Flaps remained at 25 when selected. Go around conducted with no further issues. FIM 27-51 Task 840 carried out with nil faults. History shows Maint Msg ‘TE FLAP SNSR L’ with Maint Code 27-52259 and ‘INTRMTNTINACTIVE’. Flap inspections and functional test carried out satisfactory. Defect could not be reproduced. LH TE flap position transmitter was replaced IAW AMM 27-58-01 to prevent any further occurrence. There have been no repetitive occurrences. 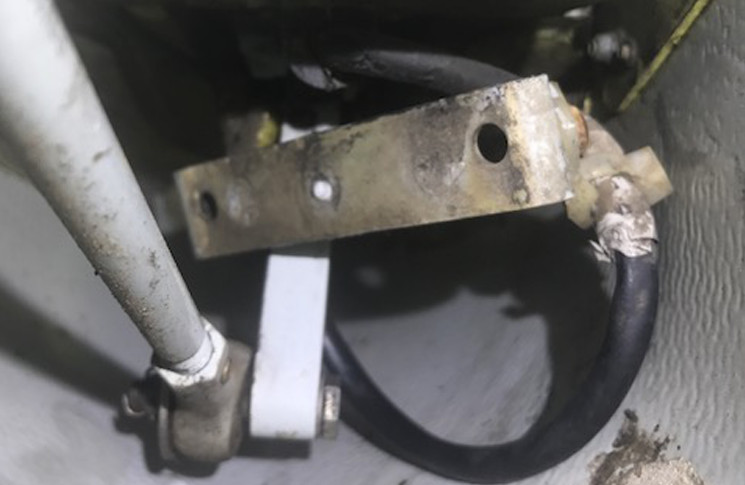 Upon engaging the flight control lock, it was identified that the control yoke was not locked. Investigation found that rear flight control lock system control cable, from the aileron to the elevator, was broken at a Pulley where the cable makes a right angle direction change. Broken cable replaced system declared serviceable. Cable to be shipped to external facility for failure mode and root cause determination. Due reliability actions planned.

On descent, passing 9000 feet AMSL, EICAS Message ‘GEN 2 OFF’ was displayed. QRH Checklist was carried out; the generator could not be reset. The A/C landed without incident. Following removal of the IDG, it was evident that there was significant lateral play in the input drive shaft, suggesting an internal failure. IDG was replaced. Part fitted during the recent ‘Mid-Life’ check and had accrued 3.9 Hours & 3 cycles post shop O/H. Strip report has been requested. 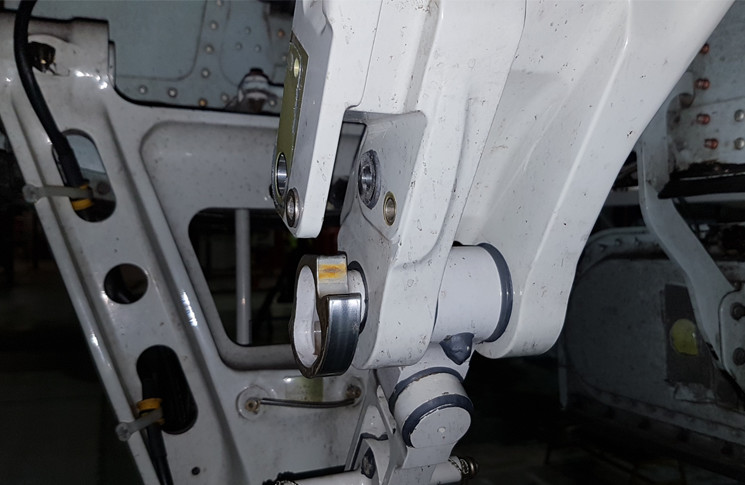 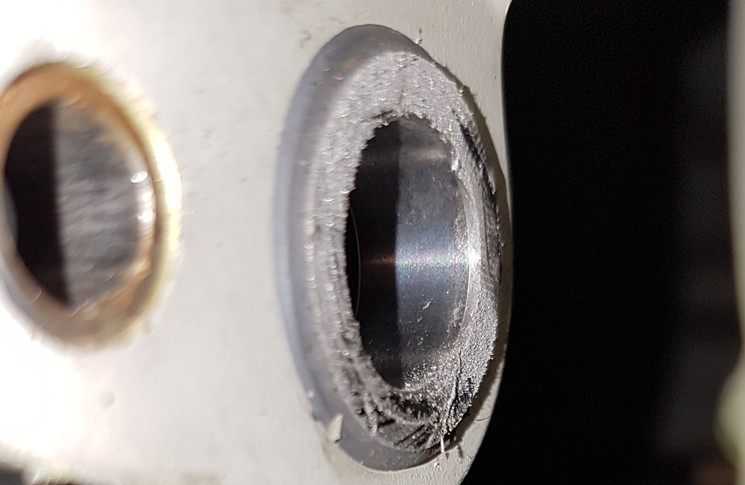 On selecting gear down on approach, NLG light failed to illuminate with in transit light still illuminated. Crew cycled the gear with the same result. Lamps tested, OK. On return to base, the gear was cycled again, this time with 3 green indications with in transit light extinguished. Normal landing performed. During the course of maintenance, NLG down lock switch replaced as a precaution. During functional checks, defect re-occurred after 5 retractions, NLG inspected while no green light illuminated, gear was fully down with drag brace down, but the down lock actuator was not fully engaged. The down lock roller was freely rotating and had not entered the cam. After applying light pressure to the lock lever the down lock actuator fully retracted and the roller entered the cam, correct indications were illuminated. NLG drag brace replaced with serviceable item.

During inspection of the thrust reverser beam and hinge assembly as per AD 2010-0187R1, the number 1 engine inboard thrust reverser # 5 hinge attach fitting has a migrated bearing. The bearing has migrated forward, leaving 5.5 mm of the bearing housing sitting proud of the fitting. Affected fittings to be replaced IAW OEM instructions. Recurrent inspections scheduled as per MPD.

Crew reported a musty sock smell at 10,000 feet on descent lasting for 15 minutes. After detailed troubleshooting, it was established that reported smells originated from trace amount of oil that remained in the APU bleed ducts or ECS system post APU maintenance. Task card has been added to the APU change procedure in use to inspect the APU compartment, intake and exhaust for any signs of contamination, regardless of the removal reason, and to clean/decontaminate as necessary.

In flight, captain advised of LGCIU fault that was unable to be reset. Due to previous history, decision was made to divert to alternate for positive maintenance. On the ground engineers performed troubleshooting resulting in proximity sensor 28GA being replaced. Aircraft declared serviceable.

Engineering notified on arrival, phone had been lost at seat 11J. Seat was moved with electronic controls and crushed phone emitting smoke was recovered. Relative inspections completed. Investigations have been initiated. 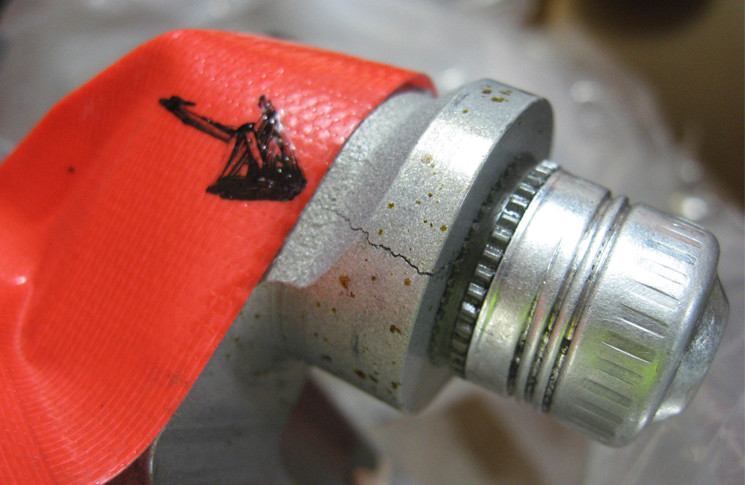 While towing, a large puddle of hydraulic oil was noted on the ground underneath the nose landing gear bay. After removing the hydraulic bay access panel, the leak was traced to the bottom of the hydraulic reservoir originating from a cracked hose fitting. Reservoir removed and replaced with a serviceable unit. 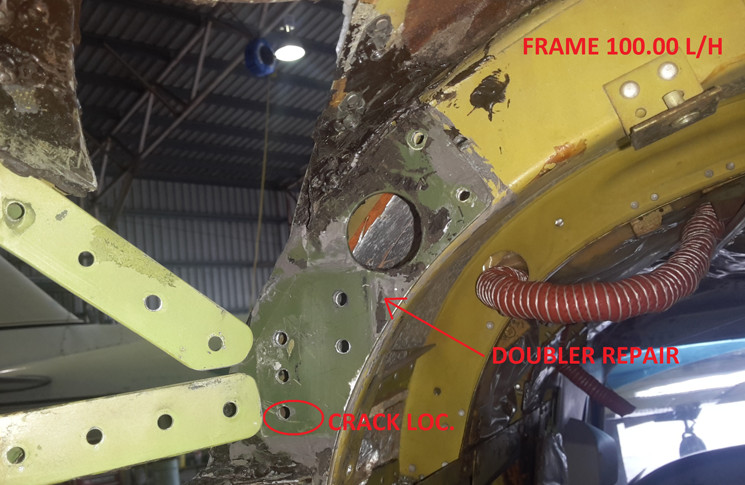 During inspections IAW AD/AC/93 Req 3, L/H FR 100 was found cracked from the lower O/B ‘T’ bracket fastener hole. Crack had been stop drilled previously and a doubler repair made to the frame. R/H frame 100 was also found cracked from the lower ‘T’ bracket fastener hole and stop drilled but the crack has progressed past the stop drill. The doubler repairs & the damaged sections of frame 100 will be replaced with a splice repair. Also the ‘T’ brackets & the leading edge to W.S. 24 rib attachment fittings will be replaced with new items due to oversized fasteners being used during reassembly after the original doubler repair causing reduced edge distances in these items. All repairs are to be made using a Part 21M approved repair scheme.