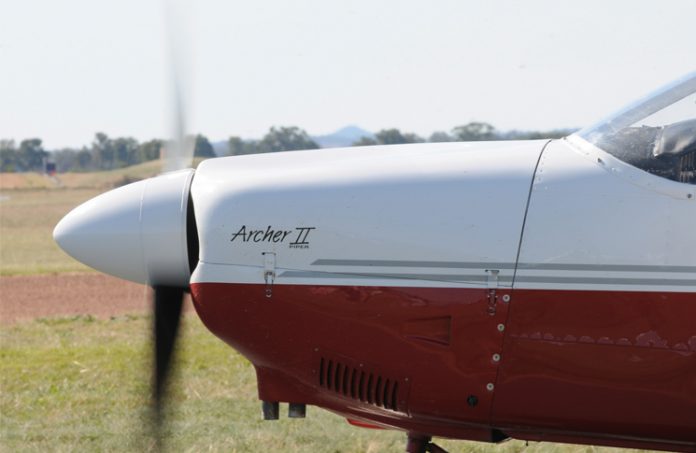 I was flying a Piper Archer from Richmond to Young in December 2018. Around midday I was approaching Young airport from the north-east, expecting to join the circuit midfield crosswind for a landing on runway 01.

I was on descent to circuit height of 2300 feet and was at about 2500 feet when I turned to head perpendicular to the runway about two nm east of the runway on the inactive side, aiming to cross over the threshold at the far end of the runway. I had radioed inbound intentions at 10 nm and again at around three nm to confirm that I was manoeuvring on the inactive side to join midfield crosswind for runway 01.

There had been no other calls received on the frequency. About one nm from the runway, I noticed another aircraft heading straight for me and about 50–100 feet above me at my 10 o’clock. It was travelling parallel to the runway. I picked it up quite late as I was not expecting any other aircraft to be in the area as there had been no other radio calls.

I immediately dived to put some extra space between us and was very concerned the other aircraft might be on descent to circuit height. Fortunately, it safely passed over and behind me. However, it was too close for comfort and, given there was no indication on the radio or change in their flight path, I do not believe the other aircraft had ever seen me.

Somewhat shaken, I continued my approach, giving radio calls on downwind and final and landed as quickly as I could, as I thought the other aircraft may also be planning to join midfield crosswind. It did give a belated radio call a few minutes later that it was in the circuit, but as it was not in my immediate vicinity, I didn’t really take it in and focused on my landing. It never actually appeared on final.

I was left wondering what could have happened if I had just been a fraction higher and fraction later. Anyway, I learnt two things from the near miss:

In addition, there was a further safety issue in this incident. After the near miss, I was left uncertain as to what the other aircraft’s intentions were and whether it knew I was even in the circuit. Given its initial position, it could have been manoeuvring to join midfield crosswind for 01 as I was or it could have been downwind for 19, as the wind was light and largely crosswind.

This confusion led me to hurry my approach and landing, as I felt I needed to get on the ground as fast as possible. As it turned out, the landing, though not my best, was fine but the risk had been increased by the confusion and distraction that confusion had caused. If the other aircraft had radioed to say they had in fact seen me and provided intentions, I would have felt more comfortable and not hurried my landing.

So other things learnt from this incident were: