A spinning top of the type used as children’s toys for hundreds of years would appear to have little in common with aviation safety. But it does. Gyroscopes, whether mechanical, ring laser or microelectronic accelerometer-based, are essential for IFR flight (as the basis for the horizontal situation indicator, or gyrocompass, they’re rather useful in VFR flight as well). Conservation of its angular momentum gives the mechanical gyroscope the property of stability in three axes, roll, pitch and yaw. Instruments that display this stability can be used to show a true path. This was first exploited in marine gyrocompasses, which appeared about the turn of the 20th century. For aircraft the gyroscope can do what it was eventually discovered that pilots couldn’t: detect an aircraft’s attitude in space. The Sperry company, which had made marine gyroscopes, began making gyroscopic instruments (and an experimental gyroscope-controlled autopilot). By 1929 these had enabled true blind flight, when an aeroplane took off, flew and landed solely by instruments, using a Sperry artificial horizon and directional gyroscope indicator.

For the first half of the 20th century aviation, like car racing and motorcycling, was a largely unhelmeted activity. Leather caps resembled helmets but their purpose was insulation and, later, a mounting for radio speakers and goggles. The arrival of the first jets brought a problem that inspired the development of the flight helmet. It was transonic buffeting, in which the aircraft sometimes shook violently enough to smash the pilot’s head into the canopy or airframe. An immediate solution was to adapt tank crew or, in the US, football helmets for aviation use. Later, the jet pilot’s helmet with its distinctive built-in visor was developed. Helmets are not widely used in civil aviation, and are mainly worn by agricultural and helicopter pilots. However evidence appears clear that helmets work in these aircraft. A US Army study found that unhelmeted helicopter pilots were 6.3 times more likely to suffer a fatal head injury in a crash.

Not making the same mistake over and over again is a common sense foundation of safety. In aviation this is achieved by rapid and comprehensive accident and incident reporting, covering flight operations and engineering. Information flows from individual operators to regulators, from where it is disseminated to all who need to know. Another form of information exchange is the SWIM program. Standing for system-wide information management, it is an information management architecture to share air traffic management information across flight information regions and national boundaries. It disseminates information such as airport operational status, weather information, flight data, and status of special use airspace.

The internet has greatly facilitated the flow of safety information in recent years, with large volumes of specialist information now available on digital media or online. The situation where a Fokker F28 crashed in New York with wing icing on take off three years after a similar F28 accident in Canada that had been investigated and reported on will, hopefully, never be repeated. The challenge is for all this information to be accessible and comprehensible. Unlike traditional aviation reporting systems the internet can be peer to peer, with one example being forums for pilots, maintainers and operators. These can make a worthwhile contribution to safety, despite the aspersions frequently cast at regulators in their posts!

The top speed of propeller-driven aircraft is limited by how fast a propeller can go. As an aerofoil (such as a propeller blade) approaches the speed of sound (around Mach 0.8), shock waves begin to appear around the leading edges, greatly increasing the drag (this type of drag is called wave drag) on an aircraft (due to increased pressure at the leading edges of the aerofoil). As a sidenote, this phenomenon later led to the notion of ‘the sound barrier’ due to researchers at the time thinking it was impossible to have an engine capable of outputting enough power to overcome this severe increase in drag.

A jet engine does not have this problem. Its propulsive force is obtained by driving hot, high-pressure gas from the combustor through a nozzle to accelerate the flow, as opposed to ‘pushing’ air through a propeller to create thrust.

The first jet engine aircraft to fly was the Heinkel He 178 in 1939. Since then, technologies have rapidly advanced, and the jet engine is now a common sight on large aircraft and military jets. Ironically, the most widely used variant of the jet, the turbofan, is in effect a thrust-augmented propeller engine.

How do aircraft land in zero visibility? At the start of the aerial public transport era (after World War II) airlines in Britain were reporting a significant number of incidents during landing in low-visibility conditions (a particular problem in the often foggy winter weather of Britain and northern Europe). In order to reduce the number of incidents, research was carried out on other means of guiding landing. This culminated in the first low-visibility automatic landing in passenger service, made by a Hawker Siddeley Trident in 1965.

The autoland system, in conjunction with an instrument landing system (ILS), allows aircraft to land in conditions that are simply too risky for a hands-on landing. (Autoland systems also work with microwave and satellite-based landing systems.) A radio array is set up at the end of a runway, which sends out narrow beams at specific radio frequencies. These allow determination of bearing and glide slope (the vertical angle an aircraft descends at towards the runway) for landing. In conjunction with a flight management system and integrated electronics, an aircraft ‘follows’ these beams as it lands. The airspeed (and even brakes, spoilers and flare as an aircraft lands) are also controlled automatically. Unfortunately, due to the high accuracies needed for this type of operation, aircraft taxiing off the runway can interfere with the radio frequencies, so there is strict regulation of the timing between landing aircraft in low-visibility conditions. This can cause delays at busy airports (such as Melbourne) on foggy days.

Towards the end of the 19th century, cork jackets were being used as life jackets, but were rigid and restricted movement. The design of the life jackets evolved from cork to foam and then bladders filled with air. There are strict regulations for the design of floatation devices in aircraft. For instance, a FAR 25-certified aircraft must have individual floatation devices that comply with FAA TSO-C72c, which sets out the minimum design and performance standards. The floatation devices must be able to remain attached to an individual during a five-foot (at least) fall into water.

An aeronautical chart is much more than a map. It also contains vital information on flight paths (with relevant bearings and headings) as well as flight profiles that give pilots information on their altitude and airspeed for approaching or leaving an aerodrome.

Jeppesen is a name synonymous with aeronautical charts. In 1930 Elrey Borge Jeppesen was a 23-year-old pilot with a penchant for making his own charts and notes instead of using the school atlases that other pilots relied on. Jeppesen’s notebooks became so renowned that other pilots started paying for copies of them, from which the company, Jeppesen, was founded in 1934. Today Jeppesen produces real-time digital aeronautical charts for pilots to use with electronic flight bags (EFBs).

Immediately after the first heavier-than-air flight, it became obvious that training as well as skill were needed to fly without risking a grisly demise. Aero clubs were the first to issue certificates to competent pilots. Nowadays, pilot licensing is a significant part of any aviation regulator’s duties. Pilot licences range from private, recreational visual flying rules (VFR) up to commercial, multi-passenger and crew, instrument flight rules (IFR) aircraft. As can be expected, the greater the responsibilities of the pilot, the more stringent the requirements to obtain the licence.

Heads-up displays were initially modified versions of the reflective sights found on World War II weaponry. With the advent of on-board radar systems in aircraft it was discovered that pilots were struggling to fly an aircraft and simultaneously use and monitor all the sophisticated instrumentation on board. The HUD attempts to remove some of the stress associated with flying by projecting flight data into the pilot’s field of view when looking out of the forward windscreen. The first HUDs were created simply by projecting an image via a cathode ray tube (remember them?) from below the pilot’s view onto a semi-reflective plate in front of the pilot. Today’s HUDs do not even need a projector and are guiding pilots of new-generation aircraft such as the Boeing 737NG and 787 and Airbus A320, 330 and 380. 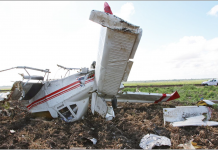