The US Coastguard captured this video footage back in January, when the pilot of the Cirrus SR22 ditched his aircraft 253 miles northeast of Maui, Hawaii after running out of fuel.

On 25 January, at 12:30pm, the Coast Guard received a distress call from the single engine aircraft and was informed by the pilot he had only three hours of fuel remaining and was going to ditch in the Pacific, approximately 230 miles northeast of Maui.

The Coast Guard scrambled an HC-130 Hercules and an MH-65 Dolphin helicopter from Air Station Barbers Point and made contact with the Cirrus three hours later. They remained in contact before the aircraft finally ran out of fuel.

At 4:44pm the pilot pulled the chute handle, deploying the aircraft’s parachute system and was able to exit to the safety of a life raft after splashing down.

A nearby cruise ship was sent to intercept the pilot, who was later described as being in a good condition. His aircraft was not so lucky—later observed adrift in the Pacific Ocean, semi-submerged.

This is not the first time a Cirrus has made headlines after a pilot has used the aircraft’s ballistic parachute system.

In May last year, another SR22 made world headlines when it descended under its own parachute in the Blue Mountains. The pilot pulled the chute handle after the aircraft spiralled out of control, saving the lives of the three men on board.

Yet it didn’t take too long for this to become ‘old news’, as two days later another Cirrus, with three on board, did the same thing in China; and three weeks later two people walked away from a Cirrus parachute deployment near Boston in the northeastern US.

As Flight Safety Australia reported in September, Cirrus is the only general aviation aircraft maker to include a ballistic parachute as standard equipment. However, at least three US companies—BRS, Magnum and Second Chantz—also make aircraft ballistic recovery parachutes.

Similar to ejection seat maker Martin-Baker, BRS has a counter on its website. In August 2014, it showed 312 lives saved. As of today, seven months later, the count is 322. 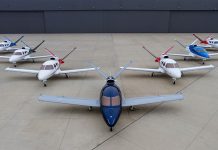