Home SDR Highlights Check your hose before it blows

When did you last think about your aircraft’s hoses? Have you ever thought about how your safety in the sky depends on these unglamorous, often overlooked but vital components? CASA’s recent Airworthiness Bulletin 02-006 Issue: 2 (AWB 02-006) gives hoses the prominence they deserve. It covers all aircraft equipped with flexible hoses, particularly hoses which carry flammable fluids such as fuel and oil.

AWB 02-006 was written in response to catastrophic in-service failures of all types of flexible hose in both large and small aircraft. CASA’s Defect Reporting System has recorded a steady stream (no pun intended) of these failures. Aviation hose failures matter because they typically involve critical systems such as fuel, oil, braking and flight control.

Flexible hoses can fail prematurely for a variety of reasons: chemical incompatibility with system fluid, incorrect installation and handling, impact damage, inadequate maintenance, heat damage, electrical arcing faulty manufacture and age are among the hazards that AWB 02-006 looks at.

The consequences of a hose failure can have a significant impact on safety. This can include engine failure, flight control system failure and fire in the air.

Essentially, the message is that aircraft use many different types of flexible hose, and each hose type has specific maintenance requirements. For safety, you and your aircraft maintainer need to closely inspect your aircraft’s hoses.

AWB 02-006 puts it more formally and rather bluntly: ‘A maintenance program that does not include an in-situ periodic inspection that specifically identifies an inspection for flexibility, chafing damage, leaking, security and routing, as well as pressure test and/or a hose retirement schedule could be considered as deficient and should be amended.’

For further advice on general maintenance check out the airworthiness bulletins on the CASA website. 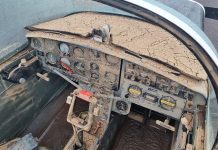 The challenge of flood-damaged aircraft