Internet retail giant Amazon has revealed more of its drone plans in a patent application uncovered shortly before Christmas by technology website Motherboard.

Motherboard reports that the patent relies on a ‘drone mesh network’ that shares information on altitude, heading and speed between nearby drones.

The application also describes antennas and optical directors on the drones configured to provide the direction, in relation to the drone, of a source of a signal. Drones could be programmed to only react to signals coming from a certain direction. ‘Should the direction as received differ from the expected direction, a compromise may be determined,’ the document says. ‘For example, signals from a satellite navigation system may be expected to come from an overhead direction. Receipt of satellite navigation signals from below an aerial UAV in flight may result in a determination of a compromise, such as resulting from malicious or inadvertent jamming from a terrestrial radio transmitter.’

The application also describes how a drone could be programmed to take avoiding action against an arrow or other low speed projectile launched by ‘an adversarial person’.

‘The UAV may deploy a protective device such as an airbag, foam, parachute, bumper, and so forth, or the UAV may initiate a mode such as configuring autorotation of one or more rotors in response to the determination that the UAV is compromised.’

Amazon revealed its first Prime Air drone in 2013 and made its first commercial delivery, in a low-volume trial of the system in Britain last month. 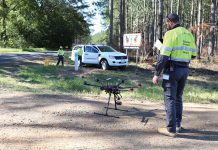 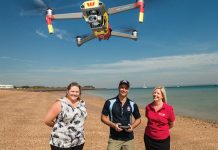 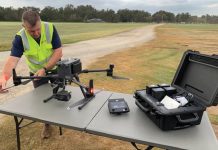