The US state of Oregon is debating whether to ban leaded aviation fuel.

The state’s transportation policy committee held a public hearing this week on a bill to ‘Prohibit selling, dispensing or using aviation fuel that contains lead or lead compounds after 1 January 2022.’ A similar bill in the Oregon Senate had a public hearing last week.

Aviation gasoline, avgas, is the last type of petrol to still contain lead, which was phased out in Australian motor vehicle petrol between 1986 and 1993. Leaded 100LL avgas remains the approved fuel for most general aviation piston engine aircraft.

The Australian National Health and Medical Research Council (NHMRC) found an association between blood lead levels less than 10 micrograms per decilitre and health effects, including reduced Intelligence Quotient and academic achievement in children, behavioural problems in children, increased blood pressure in adults and a delay in sexual maturation in adolescent boys and girls. However, the NHMRC says there is insufficient evidence to conclude that lead at this level caused any of the health effects observed.

The NHMRC has said ‘there is no “safe” level of lead that has been proven not to cause any health problems’.

The US FAA has announced, but been slow to act on, plans to withdraw leaded fuel from sale. An alternative UL94 has been developed by US company Swift Fuels and is available on the US East Coast and Midwest. Swift says UL94 can be used by about two-thirds of the US piston-engine general aviation fleet. The company is developing a higher octane fuel, UL102, that it says could be a ‘drop-in’ substitute for 100LL, requiring no modification of engines or fuel systems. 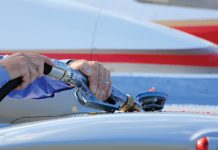