Google is beginning testing its drone delivery system near Canberra.

Project Wing, a drone unit of Alphabet, the holding company of Google, has set up a test at Fernleigh Park, a semi-rural residential development south of Queanbeyan, in NSW.

‘Given the large estates and lots here, we’re able to fly and do deliveries without flying over populated areas,’ project director James Ryan Burgess told the Canberra Times.

Burgess told the local newspaper Project Wing drones could deliver packages up to 1.5 kg in weight. The new drone uses 12 hover motors, a wing and two propulsion motors, enabling it to fly as a multi-rotor copter and fixed wing aircraft, as circumstances require.

Project Wing has already delivered a test package in Australia: a bar of Cherry Ripe chocolate to Warwick, Queensland farmer Neil Parfitt, in 2014. The new drone design is larger and uses more motors than the model that made that delivery.

On its website, Project Wing says it is ‘working on an unmanned traffic management (UTM) system so that hobbyists and commercial operators alike can safely navigate the airspace’.

Residents of Fernleigh Park have the opportunity to participate in the trial, and receive drone delivered packages if they do, the Canberra Times reported.

CASA has approved the trial. 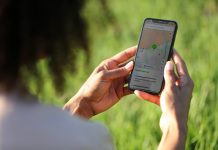