Christmas laser lights designed to project festive patterns onto the side of houses can pose a hazard to aviation, according to the US Federal Aviation Administration (FAA).

The FAA says that for the past several years, it has received reports from pilots who say they were distracted or temporarily blinded by laser displays.

‘People may not realise that systems they set up to spread holiday cheer can also pose a potential hazard to pilots flying overhead’, a post on the FAA website says.

‘If you’re going to install a holiday laser-light system, please make sure the lights are hitting your house and not shining up into the sky. It may not look like the lights go much farther than your house, but the extremely concentrated beams of laser lights actually reach much further than most people think.’

For previous Flight Safety Australia articles on the dangers of lasers to aviation, see: 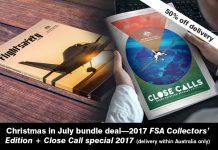 Bargain bundle for down under ‘Christmas’

All I want for Christmas is…a drone!