Obituaries, including ours, for the Boeing 747 may have been premature: Cargo operator UPS Airlines placed an order last week for fourteen 747-8F freight versions of the pioneering wide body airliner.

The deal is in addition to UPS’s 2016 order for fourteen Boeing 747-8Fs and includes an agreement to buy four new Boeing 767 freighters. It comes in the week IATA released figures showing a 9 per cent growth in air freight in 2017.

The 747’s reprieve is a direct result of the aircraft’s original design. It was planned as a freighter from the start. Its distinctive high flight deck was designed to enable an upward-folding nose, for freight loading. Boeing planned this second career for the 747 in anticipation of it being made rapidly obsolete by supersonic airliners, such as Concorde, and Boeing’s later cancelled 2707 SST supersonic transport.

The world’s other four-engine wide body aircraft, Airbus’s A380, also received a much needed order this year, with Middle-eastern carrier Emirates signing for 20 new aircraft in January, in a transaction estimated at $US16 billion.

However, the type continues to disappear from passenger service, as operators switch to smaller, twin-engine replacements. No US carriers fly the 747 anymore; the type’s last US passenger flight was by Delta Airlines in January. 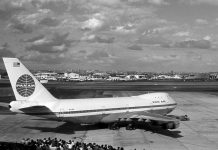 Goodbye Jumbo: the legacy of the Boeing 747