Date: 25 November
Aircraft: Aérospatiale/Aeritalia ATR-72
Description: During take-off, the captain’s seat moved suddenly backwards causing him to lose control of the aircraft. It suffered a runway excursion and there was damage to the propeller blades of one engine when it impacted barbed wire at the airport perimeter fence.
Location: Accra-Kotoka Airport (ACC), Ghana
Fatalities: Nil

Date: 13 December
Aircraft: Aérospatiale/Aeritalia ATR-42
Description: The aircraft collided with trees and terrain shortly after take-off and was destroyed. There were 25 occupants. Six passengers and one crew member sustained serious injuries and one passenger was killed.
Location: W of Fond-du-Lac Airport, SK (ZFD), Canada
Fatalities: 1 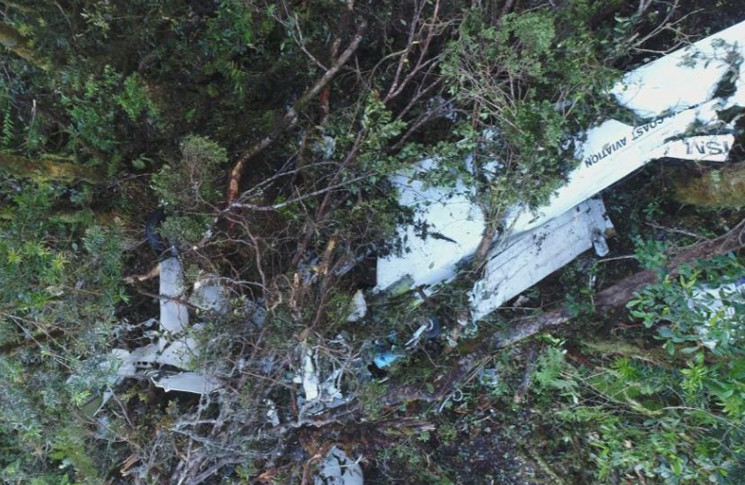 Date: 23 December (image above)
Aircraft: Britten-Norman BN-2 Islander
Description: The aircraft crashed into a hillside  at 9500 ft. The pilot was tracking across the Sarawaget ranges not above 10,000 ft when he impacted the ridge in a steep nose-down, right-wing low attitude. During a search for the aircraft, the right aileron was found hanging from a tree near the top of the ridge and the remainder of the wreckage was found 150 metres away. The pilot, the sole occupant, initially survived the crash but bad weather prevented a recovery until 26 December. By that time, the pilot had died from his injuries.
Location: South of Dinangat Village, Papua New Guinea
Fatalities: 1 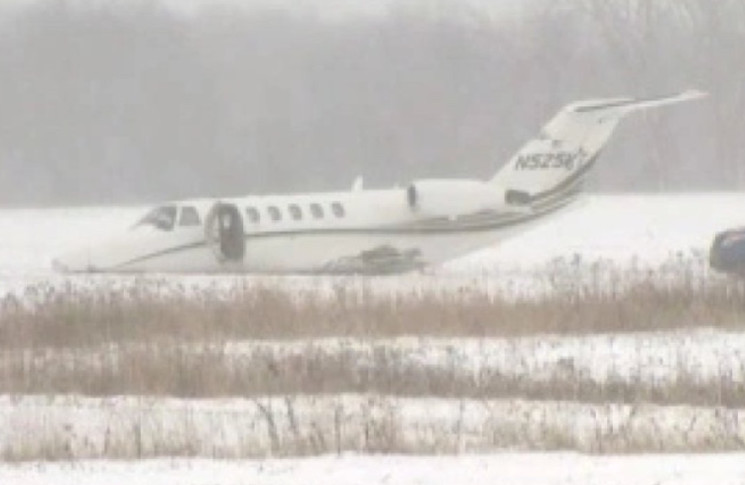 Date: 27 December (image above)
Aircraft: Cessna 525 CitationJet
Description: The aircraft went off the runway after landing in snow and crashed into an airport fence and highway barrier before stopping in a corn field 280 metres away. The aircraft suffered substantial damage including the left wing separating near the wing root and impact damage to the vertical stabiliser. The occupants received minor injuries.
Location: Michigan City Airport, IN (MGC), USA
Fatalities: Nil

Date: 5 January
Aircraft: Boeing 737-8CT (WL) and Boeing 737-8FH (WL)
Description: Two Boeing 737-800 aircraft collided on the ground. One had just landed following a flight from Mexico and was taxiing to the terminal when it was stopped with the engines and APU running. Another  Boeing aircraft was being towed to an alternate position on the infield. Two ground personnel were in the cab of the tow vehicle and they were told by the controller to pushback at their discretion. The aircraft under tow began to move back and the APU contacted the right wing of the stationary aircraft. A fire rapidly ensued. The tow vehicle operators pulled their aircraft back towards the gate to separate the two and an evacuation was ordered of the stationary aircraft and all passengers were evacuated safely.
Location: Toronto-Pearson International Airport, ON (YYZ), Canada
Fatalities: Nil 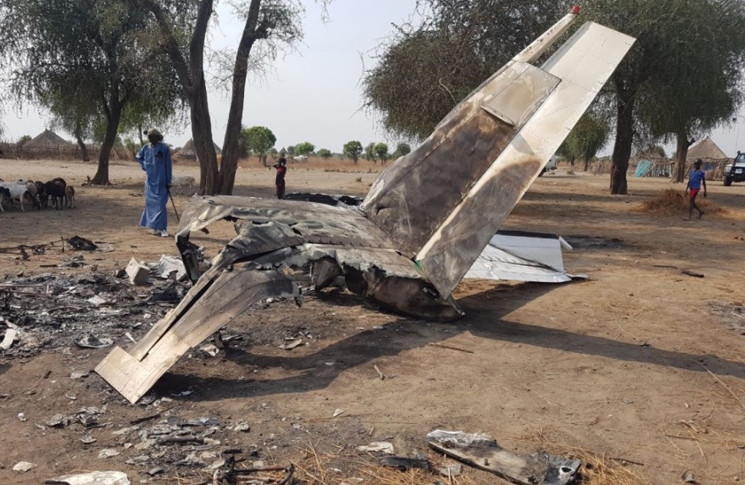 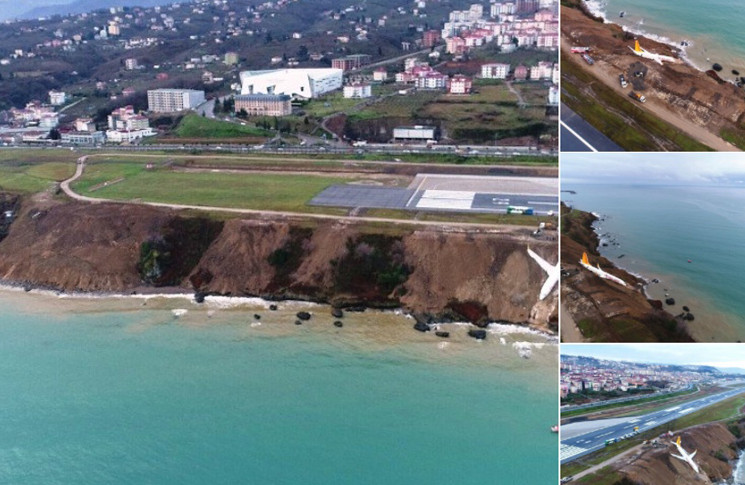 Date: 13 January (image above)
Aircraft: Boeing 737-82R (WL)
Description: The aircraft went off the left side of the runway after landing in rain and stopped down a steep slope with the tail sticking out about five metres above the runway level. The number two engine broke off and fell into the sea. The 168 occupants evacuated through the rear and over wing emergency exits.
Location: Trabzon Airport (TZX), Turkey
Fatalities: Nil 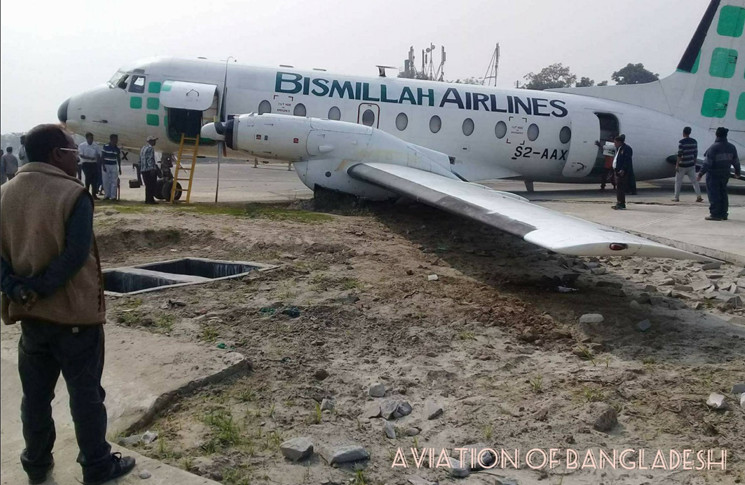 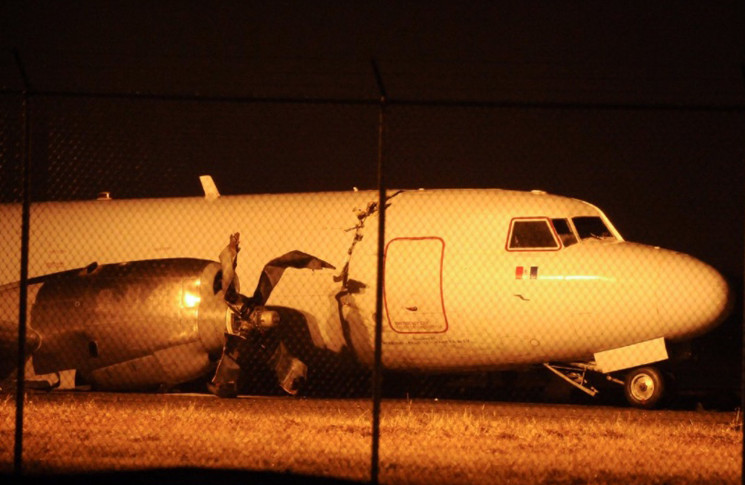 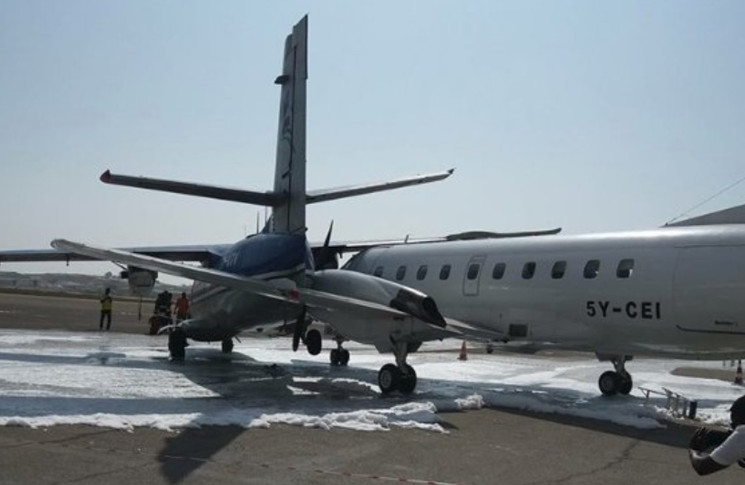 Date: 20 January (image above)
Aircraft: Let L-410UVP and Embraer EMB-120ER Brasilia
Description: The two aircraft collided on the tarmac when the EMB-120 was taxiing to a parking position on the apron and sped up instead of slowing down. The number one engine impacted the right-hand fuselage of the other aircraft. A fuel spill occurred but there was no fire.
Location: Mogadishu Aden Adde International Airport (MGQ), Somalia
Fatalities: Nil