Many general aviation (GA) pilots fly and operate out of metropolitan D aerodromes, where an air traffic control tower is in place. These aerodromes are often extremely busy with high traffic levels, have a complex aerodrome layout and are often home to training organisations and charter operations. These factors escalate safety risk.

Of the various operational deviations that may occur, runway incursions carry the most risk with the potential cause an accident.

A runway incursion (RI) occurred at Moorabbin in 2017 involving a C172 and a PA28 on RWY17R. The C172 landed and called air traffic control from TWYA4, (of which there are two, either side of RWY17R), and requested to taxi to the apron. They received clearance to taxi. The PA28 was on short final to RWY17R and was in receipt of a landing clearance.

The controller sighted the C172 on the eastern side of RWY17R and was about to cross the RWY. The controller instructed the C172 to stop immediately, however the C172 infringed the flight strip and the PA28 conducted a go-around.

Investigation of this occurrence found a number of safety factors which were pilot and controller attributed. 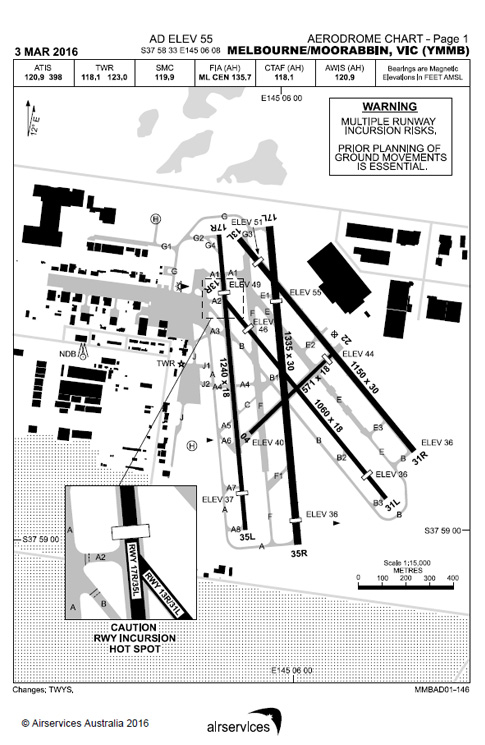 One finding was the prevalence of involuntary-automaticity, where assessments are made with little conscious consideration. This can be overcome by maintaining situational awareness at all times during flight, especially when navigating to an apron.

The importance of clearly understanding and following ALL procedures in AIP, especially the requirement to obtain a specific clearance to CROSS a RUNWAY (active or not) every time, will help develop situation awareness and maintain consistency in radio telephony procedures.

The Airservices Pilot and Airside safety page on our website has a number of publications and information to assist pilots operating at metropolitan D aerodromes. Hard copies are available to order from safety.communications@airservicesaustralia.com