Date 11 March
Aircraft Canadair CL-600-2B16 Challenger 604
Location near Shahr-e Kurd, Iran
Fatalities 11
Description A Turkish corporate jet on a flight from Sharjah, UAE to Istanbul, Turkey climbed to about FL377 when it suddenly entered a pronounced descent. The aircraft then crashed in mountainous terrain. Weather conditions at the accident site include thunderstorms, heavy winds and rain.

Date 12 March (images above)
Aircraft de Havilland Canada DHC-8-402Q Dash 8
Location Kathmandu-Tribhuvan Airport (KTM), Nepal
Fatalities 52
Description US-Bangla Airlines flight BS211 crashed while landing. The aircraft had 67 passengers and four crew members on board. The aircraft was cleared for an approach to runway 02. The approach was aborted and the flight crew radioed that they were performing a right-hand orbit. Initially the air traffic controller replied that they could not land in the opposite direction (runway 20) because other traffic were on finals. The controller requested approaching traffic to hold and asked flight 211 if they wanted to land on runway 02 or 20. The flight crew replied, ‘we’d like to land on two-zero’. The flight was then cleared to land on runway 20. The flight then radioed: ‘Affirmative, we have […] runway in sight, requesting to land, Sir’. The flight was again cleared to land. The pilot read back: ‘cleared to land runway 02’, though clearance had been given for runway 20 initially. The air traffic controller then also read back the clearance for runway 02. The aircraft landed in the middle of runway, broke through a fence then plunged onto a ditch before catching on fire.

Date 15 March
Aircraft Beechcraft B200 Super King Air
Location near Blue Creek, Orange Walk Town, Belize
Fatalities Nil
Description The aircraft was found damaged in a field close to the Belize-Mexican border. The passenger cabin was stripped and empty. Traces of blood were found on the pilot’s seat. One man was arrested after he was seen leaving the area. The aircraft is suspected to have been used in drug trafficking.

Date 17 March
Aircraft Canadair CL-600-2B19 Regional Jet CRJ-200ER
Location Montreal-Pierre Elliott Trudeau International Airport, QC (YUL), Canada
Fatalities Nil
Description The aircraft was hit by a service vehicle while stationary at a gate, causing substantial damage to two flaps on the right-hand wing and a fibreglass panel under the aircraft. There were no injuries.

Date 28 March (video above)
Aircraft Boeing 737-76J and Boeing 767-3000ER
Location Tel Aviv-Ben Gurion International Airport (TLV), Israel
Fatalities Nil
Description The two aircraft were involved in a ground collision accident when the Boeing 737 was being pushed back from the gate when the tail fin impacted the right-hand horizontal stabiliser the other aircraft. 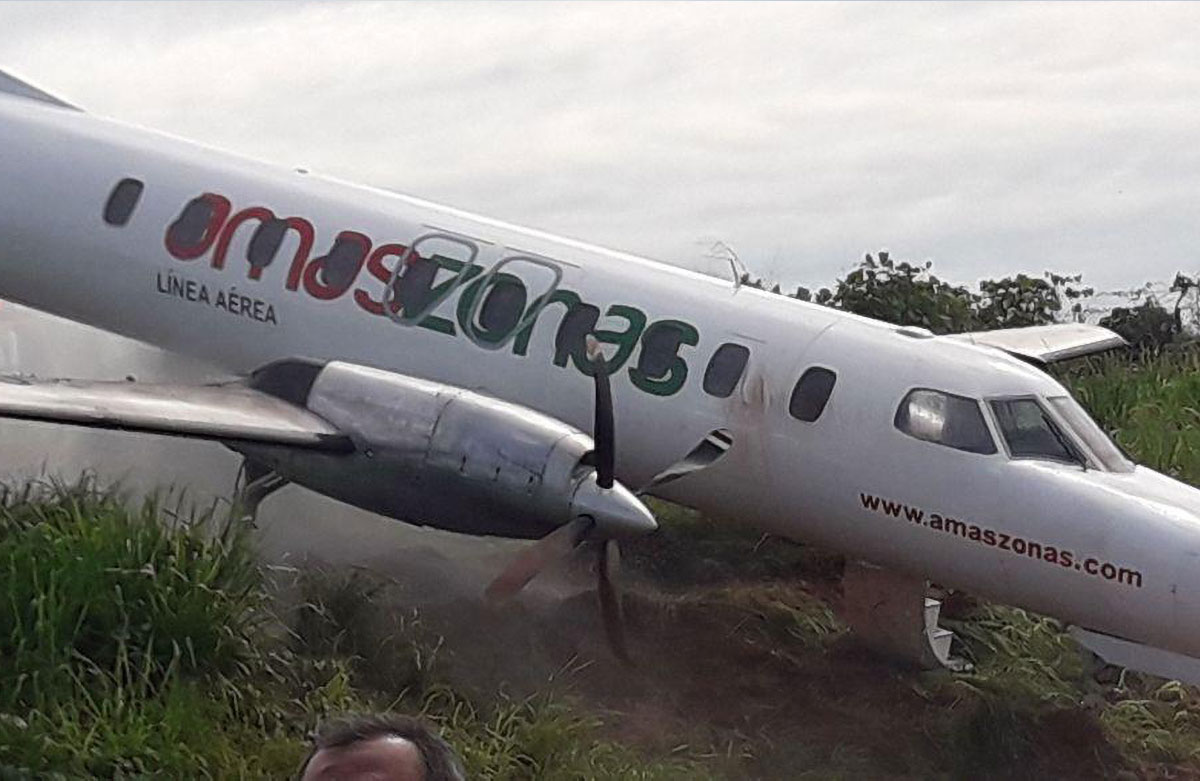 Date 29 March (image above)
Aircraft Swearingen SA-227DC Metro 23
Location Riberalta-Capitán Av. Selin Zeitun Lopez Airport (RIB/SLRI), Bolivia
Fatalities Nil
Description The aircraft hit a flock of birds on take-off. The crew aborted the take-off and ran off the runway down a grassy slope before coming to rest at the edge of a road, about 100 metres past the end of the runway.