Passengers on commercial aircraft are instructed to leave personal items behind in the event of an emergency evacuation—and for good reasons.

Apart from the risk of delaying evacuation, where seconds can be the difference between life and death, there is also the risk of physical damage to escape slides from hard objects such as luggage.

In real-life emergencies, however, rational behaviour can fly out the window—or the emergency exits—as evacuations of Boeing 777s in Dubai in 2016, San Francisco in 2015 and Las Vegas in 2013, show.

While in each of these incidents passengers were evacuated successfully, some ignored crew instructions, opened overhead lockers and took with them items including handbags, duty-free alcohol and wheeled cases.

In another incident at Heathrow in 2008 a passenger even re-entered an aircraft by climbing back up an escape slide to retrieve luggage.

The Royal Aeronautical Society in Britain proposed recently that regulators look at whether locking overhead bins in emergencies might be a solution.

But in an article for Forbes magazine, former aircraft cabin equipment specialist Marisa Garcia argues that such a practice might actually make aircraft cabins less safe.

She points out that in an emergency, locking overhead bins could slow the crew’s access to vital equipment such as oxygen masks or smoke hoods.

And then there is the question of how panicked passengers might react.

On Fairfax Media’s traveller.com.au website, Michael Gebicki put it this way: ‘The prospect of some enraged and panicked passengers slamming at the overhead lockers while trying to free their precious gear—and holding up everyone behind—is not the desired effect. It’s behaviour that needs adjusting, not the hardware.’

‘Perhaps requiring passengers who have retrieved their carry-ons to return them to the overhead lockers of their stricken aircraft could be a more effective deterrent.’

CASA’s Cabin Safety Bulletin number 9, to be published on 7 July, advises operators on management of cabin baggage in an evacuation.

The US Department of Transportation announced recently that it would be looking into the adequacy of emergency evacuation standards which have been in place since 1990, given the behaviour of some passengers and that airlines have added more seats and cut the space between seat rows. 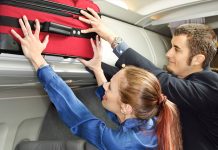 Airline to charge for overhead locker 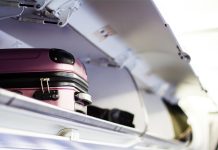