NASA is getting back into human spaceflight. The US space agency will name the astronauts assigned to the first flight tests and missions of Boeing’s CST-100 Starliner and SpaceX’s Crew Dragon next Friday 3 August.

The Starliner and Crew Dragon are part of NASA’s Commercial Crew Program to develop and operate a new generation of spacecraft and launcher to carry crews safely to and from low-Earth orbit. They will be the first launches of American astronauts on American-made spacecraft from American soil to the International Space Station (ISS) since NASA retired the Space Shuttle in 2011.

The Boeing Starliner spacecraft is launched from a United Launch Alliance Atlas V rocket and the Crew Dragon launches from a Falcon 9 rocket.

NASA says experiments and a presence on the space station are critical for understanding the challenges of long-duration spaceflight, and necessary for a sustainable presence on the Moon and missions to Mars.

For those who like to stay up late (surely a reasonable assumption about astronomy and space enthusiasts) the announcement will be shown at 11 am US eastern time on the agency’s website, or 1 am on Saturday 4 August Australian eastern standard time.

CASA currently has jurisdiction over airspace from ground level to 100 km altitude, where space is accepted to begin. Until recently, little happened in the upper 80 km of this jurisdiction, CASA executive manager stakeholder engagement, Rob Walker, told the Aerospace Futures conference in Canberra last week.

‘The development of commercial space launches means this is about to change and even before the establishment of the Australian Space Agency on 1 July we were talking with the Department of Industry, Innovation and Science about how we would share the administration of this airspace,’ Mr Walker said. 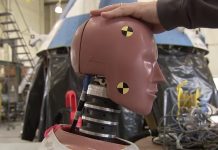