Remember the Concorde that could zip between New York and London in a neck-breaking three hours thirty minutes? Well ever since its retirement in 2003 aircraft manufacturers have been looking for the next inspiration for a commercial jet to slash the seven- to eight-hour journey time.

In recent years there have been many transportation pipe dreams—luxury cruise-like zeppelins, hyperloops, flying trains, hypersonic planes etc. but the latest (and fastest, bar none) concept to throw its hat into the ring is the Aerion Supersonic’s AS2 jet. Designed with assistance from aerospace giant Lockheed Martin, it is a sleek, big-cabined jet poised to travel at 1.4-mach—well past the speed of sound at a whopping 1075 miles per hour.

One of the problems with the Concorde (apart from being a financial albatross) was the thunderclap sonic booms it left in its wake. Key to the production of the AS2 is that it will be sonic boom-free, and cruise at Mach 0.95 while crossing over land. Once over an ocean, it will really crank up and shave four hours off a Sydney to London flight, three hours off a San Francisco to Tokyo flight and two and a half hours off a New York to London flight.

Aerion plans for the AS2 jet to be ready for commercial use in 2025. 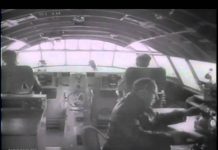 A salute to French aviation