Engineers at Caltech, the California Institute of Technology, have developed software they say enables drones to herd birds, potentially reducing the risk of birdstrike near airports.

Principal investigator on the drone herding project, Soon-Jo Chung, said he had been inspired by thinking about the celebrated water landing of US Air flight 1549, in 2009, when pilots Chesley Sullenberger and Jeffrey Skiles were forced to land in the Hudson River after striking a flock of geese shortly after take-off.

‘The passengers on flight 1549 were only saved because the pilots were so skilled,’ Professor Chung said. ‘It made me think that next time might not have such a happy ending. So, I started looking into ways to protect airspace from birds by leveraging my research areas in autonomy and robotics.’

The study was co-written with Aditya Paranjape, Kyunam Kim, and David Hyunchul Shim. In it the engineers present a novel herding technique, called the m-waypoint herding algorithm. ‘The robotic UAV interacts with the flock by positioning itself sequentially at a periodically refreshed set of m points. It relies on the inherent stability of the flocking dynamics to prevent fragmentation of the flock, and the m points are chosen to maximise the deflection of the flock’s flight path,’ they say.

Professor Chung said herding was difficult with piloted drones. ‘When herding birds away from an airspace, you have to be very careful in how you position your drone. If it’s too far away, it won’t move the flock. And if it gets too close, you risk scattering the flock and making it completely uncontrollable.’

He told Caltech news ‘Herding relies on the ability to manage a flock as a single, contained entity—keeping it together while shifting its direction of travel. Each bird in a flock reacts to changes in the behavior of the birds nearest to it. Effective herding requires an external threat—in this case, the drone—to position itself in such a way that it encourages birds along the edge of a flock to make course changes that then affect the birds nearest to them, who affect birds farther into the flock, and so on, until the entire flock changes course. The positioning has to be precise, however: if the external threat gets too zealous and rushes at the flock, the birds will panic and act individually, not collectively.’

Professor Chung initially looked at developing flapping wing drones to herd birds, and even developed a ‘bat-bot’ but found the task could be done just as effectively by a conventional quadcopter drone. 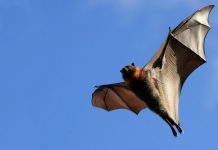