A rise in engine problems in piston engine helicopters has triggered CASA’s most recent Airworthiness Bulletin.

‘Industry participants are seeing a significant increase in incidences of premature engine cylinder removals due to exhaust valve and valve guide wear, predominantly affecting Heli Mustering operations across the northern regions of Australia,’ the bulletin says.

‘In several cases cylinder changes have occurred within the first 100 hourly inspection due to failed compression testing.’

The bulletin cautions against leaping to conclusions about what might be causing the problem.

‘It has been widely theorised that changes in avgas grade, has caused the described problem when aircraft operations are conducted in high outside air temperature (OAT) environments. However, at this time it has not been conclusively determined that changes in the fuel composition is the source of the engine problems,’ AWB 85-024 says.

‘A clear understanding of all potential causative factors needs to be established before any solutions can be recommended.’

‘An investigative stakeholder group has been formed with representation from Lycoming as the primary affected engine manufacturer, Viva Energy Australia as the primary fuel supplier and the Australian Helicopter Industry Association, together with a number of prominent affected operators and maintainers in Queensland and the Northern Territory.

The bulletin also says problems are not limited to Lycoming products, as cylinders fitted with parts manufacturer approval (PMA) parts have also failed in similar circumstances, and Continental engines installed in fixed wing aircraft have had similar occurrences.

It suggests borescope analysis, spectrographic oil analysis and digital engine monitoring as ways to detect the problem before it causes a possible in-flight hazard. 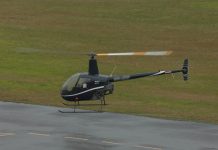