As a child, Paul Allen knew the names of the Mercury Seven astronauts by heart in the way other children memorised sport stars. As a youth, he realised that his short sight would never allow him to achieve his ambition of being an astronaut himself, despite impeccable academic results. As a man, he funded audacious projects that sought the future of aviation, while respecting its past.

The Microsoft co-founder, who has died at 65, was a knowledgeable and intellectually capable enthusiast who used his fortune from the ubiquitous software company to expand the boundaries of possibility in aviation.

Allen was behind the first private spacecraft when he joined forces with a small builder of radically unconventional experimental aircraft, Scaled Composites, to build an air-launched sub-orbital shuttle and twin boom launch aircraft. The Scaled Composites SpaceShipOne won the Ansari X Prize when it became the first non-governmental craft to reach the edge of space. Allen then licensed the technology behind the spacecraft to Richard Branson, whose Virgin Galactic has developed it into SpaceShipTwo, with plans to fly tourists into space.

Allen subsequently engaged Scaled Composites as part of his Stratolaunch Systems project. Stratolaunch is a twin-fuselage aircraft using recycled parts from two Boeing 747-400s that has been designed to lift a rocket (or rockets) weighing up to 227 tonnes and launch it into low-Earth orbit.

The aircraft has a wingspan of 117.4 metres (385 feet), twin fuselages 72.5 metres long and twin vertical stabilisers 15 metres high. Its maximum take-off weight of 589 tonnes is slightly less than the world’s heaviest aircraft, the Antonov An225. Its six Pratt and Whitney engines are ex-Boeing 747 units, as are its cockpit windows and flight deck (it will be flown by a three-person crew from the right fuselage; the left fuselage is unpressurised). The aircraft has a relatively short operational range of about 2000 nautical miles, sufficient however to launch up to three rockets in a single flight.

In August, Stratolaunch announced a plan to develop a family of rockets and a space plane, to be launched from the giant aircraft.

Allen funded preservation of aviation history, creating a museum, the Flying Heritage & Combat Armor Museum in Washington state, US, and restored aircraft for it, including an ambitious project to restore the world’s first jet fighter, a Messerschmitt 262, to flying condition, (complete with refurbished, but terrifyingly unreliable Junkers Jumo 004 engines). Allen also led an expedition that discovered the wreck of the USS Lexington, which was sunk in the World War II Battle of the Coral Sea.

He distributed billions of dollars to many causes and projects, including an effort to control poaching in Africa with fleets of drones; research to combat ebola virus; and the Allen Institute for Brain Science, which strives to understand the origins of consciousness and find a cure for brain diseases. 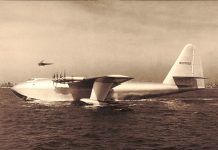