Date 1 September
Aircraft Boeing 737-8AS (WL)
Location Adler/Sochi Airport (AER), Russia
Fatalities Nil
Description The aircraft suffered a runway excursion accident after landing. Weather was poor with a thunderstorm in the area. The initial approach was aborted close to the runway threshold and a go-around was executed. The aircraft circled for another approach but after touchdown, was unable to stop on the remaining runway and overran. The aircraft crashed through a fence and came to rest on a dry and rocky surface in a river bed. Eighteen passengers were injured. The aircraft sustained serious damage. The airport shift supervisor, who was one of the first responders to the accident, died of a heart attack at the scene.

Date 9 September
Aircraft Let L-410UVP
Location near Yirol Airport, South Sudan
Fatalities 20
Description The aircraft crashed into Lake Yirol, South Sudan, close to the destination airport. It had been overhauled in 2016–2017 after having been stored for eight years. There were 23 people on board and only three survived. (image above)

Date 15 September
Aircraft Canadair CL-215-6B11 (CL-415)
Location Whitehead Pond, NL, Canada
Fatalities Nil
Description The aircraft was conducting aerial firefighting operations and was scooping water from Whitehead Pond when the crew heard a loud band. It was suspected that the aircraft had struck hidden rocks. Full power was applied, and a go-around was conducted. Both left water-drop doors indicated open, and the hydraulic quantity indicated low. The hydraulic pressure was normal, and airspeed below maximum open-door speed was maintained for the return to the departure airport. While enroute, attempts to close the doors were unsuccessful. The flight crew completed the checklist related to the low hydraulic quantity, manually jettisoned the remaining water, and landed without further incident. The aircraft’s lower left hull sustained substantial damage.

Date 18 September
Aircraft British Aerospace BAe-125-700A
Location Santa Fe Airport, NM (SAF), USA
Fatalities Nil
Description The aircraft veered to the right during landing. The pilot tried to correct to the runway centreline; however, the aircraft came to rest in the grass adjacent to the runway. The pilot and four passengers were not injured but the aircraft sustained substantial damage. The pilot reported that during the landing roll, he attempted to use the nose wheel tiller to steer the aircraft on the ground; however, the tiller was locked, and the pilot was unable to twist the tiller counterclockwise. The pilot was able to lift the nose wheel off the runway to regain control and the aircraft came to rest in the nearby grassy area.

Date 25 September
Aircraft Beechcraft 200 Super King Air
Location 6,4 km (4 miles) SW of Oscoda Wurtsmith Airport, MI, USA
Fatalities 1
Description The aircraft impacted wooded terrain while on an instrument approach to the airport. The aircraft was destroyed, and the pilot was killed. The on-scene examination of the accident site revealed the aircraft clipped tree tops prior to impacting the ground. There was a fire after impact that consumed the entire aircraft. Examination of various actuators indicated the landing gear was down and approach flaps had been set. (image above)

Date 26 September
Aircraft Boeing 737-8Q8 (WL)
Location Chittagong-Shah Amanat International Airport (CGP), Bangladesh
Fatalities Nil
Description The nose landing gear failed to deploy while on approach to Cox’s Bazar Airport, so the aircraft was diverted to Chittagong Airport as the runway at Chittagong has a landing distance available (LDA) of 2940 m as opposed to 2042 m for Cox’s Bazar. Chittagong also has a higher fire-fighting category (7 as opposed to 5). The aircraft overflew Chittagong Airport once before a forced landing was executed. It came to rest 70 m short of the runway threshold and about 210 m short of the runway end. An evacuation was carried out after the aircraft came to a stop on the runway. (video above) 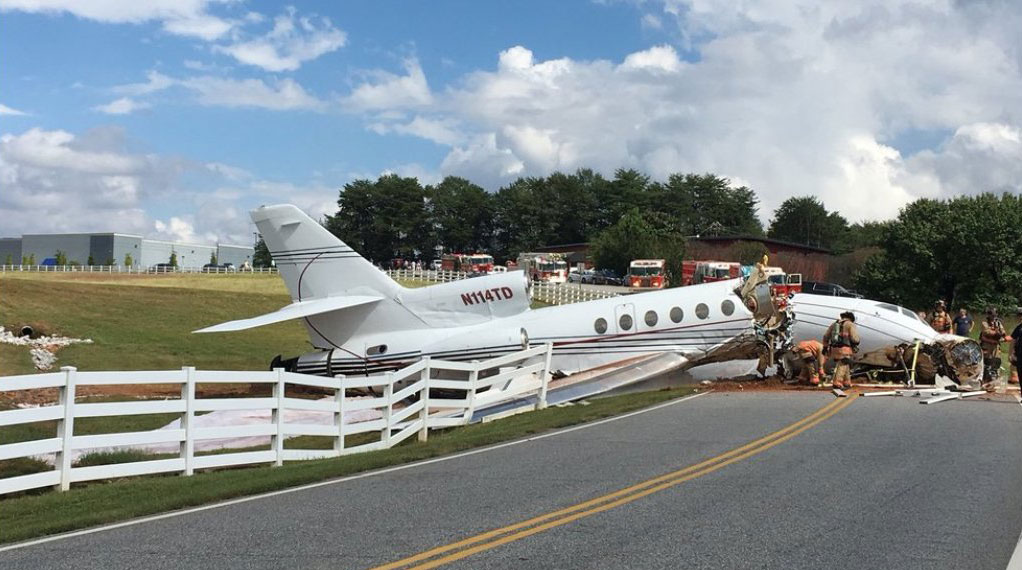 Date 27 September
Aircraft Dassault Falcon 50
Location Greenville Downtown Airport, SC (GMU), USA
Fatalities 2
Description The corporate jet sustained substantial damage in a runway excursion accident after landing. It departed the end of the runway, crossed a grassy area, then went down a 50-foot embankment. There was no fire. Fuel was observed leaking from the wings at the accident site. The nose landing gear was separated and found about midway down the embankment. The fuselage was separated immediately aft of the cockpit area. The slats and flaps were extended. Both the right and left airbrakes (spoilers) were extended. First responders reported that all three engines were operating at full power for at least 20 minutes after the accident with one engine running until about 40 minutes after the accident. There were four occupants but only two survived. (images above)

Date 27 September
Aircraft Cessna 208B Supervan 900
Location 120 km (75 miles) E off Sendai, Japan, in the Pacific Ocean
Fatalities 1
Description The aircraft took off from Saipan, Commonwealth of the Northern Mariana Islands, USA, at 07:00 JST for an international flight to New Chitose, Japan with an estimated flight time of 9 hours. Two F-4’s of Japan Air Self-Defence Force noticed the aircraft flying normally at 14:50 JST over the Pacific Ocean but could not establish any radio contact with the flight. They lost the Caravan due to clouds. Radar contact with the flight was lost at 15:28 JST. Parts of the plane were found floating on the water at 17:23 LT. The sole Norwegian pilot is assumed to have died. The aircraft was modified for geophysical survey work and converted to a Texas Turbine Conversions Supervan 900 using an 850 hp Honeywell TPE331-12JR engine (as opposed to the standard 675 hp PT6A-114A engine), and a 4-bladed prop.

Date 28 September
Aircraft Boeing 737-8BK (WL)
Location Chuuk/Weno International Airport (TKK), Micronesia
Fatalities 1
Description The aircraft overran the runway and landed in water 145 metres offshore from the runway threshold. Six passengers were hospitalised after the accident and one passenger was reported missing. His body was found by divers on 1 October. The aircraft was approaching the runway in rain. After the aircraft came to rest, local boats and some United States Navy divers went to the scene to rescue the occupants. (image above) 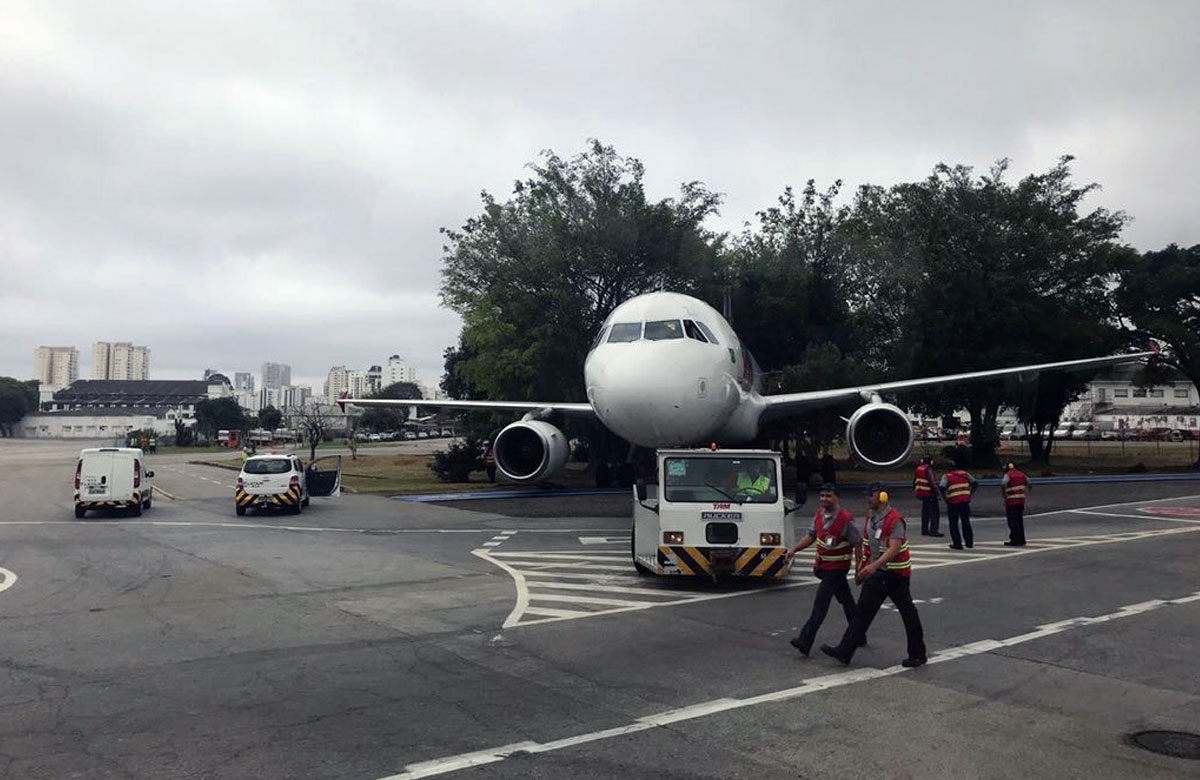 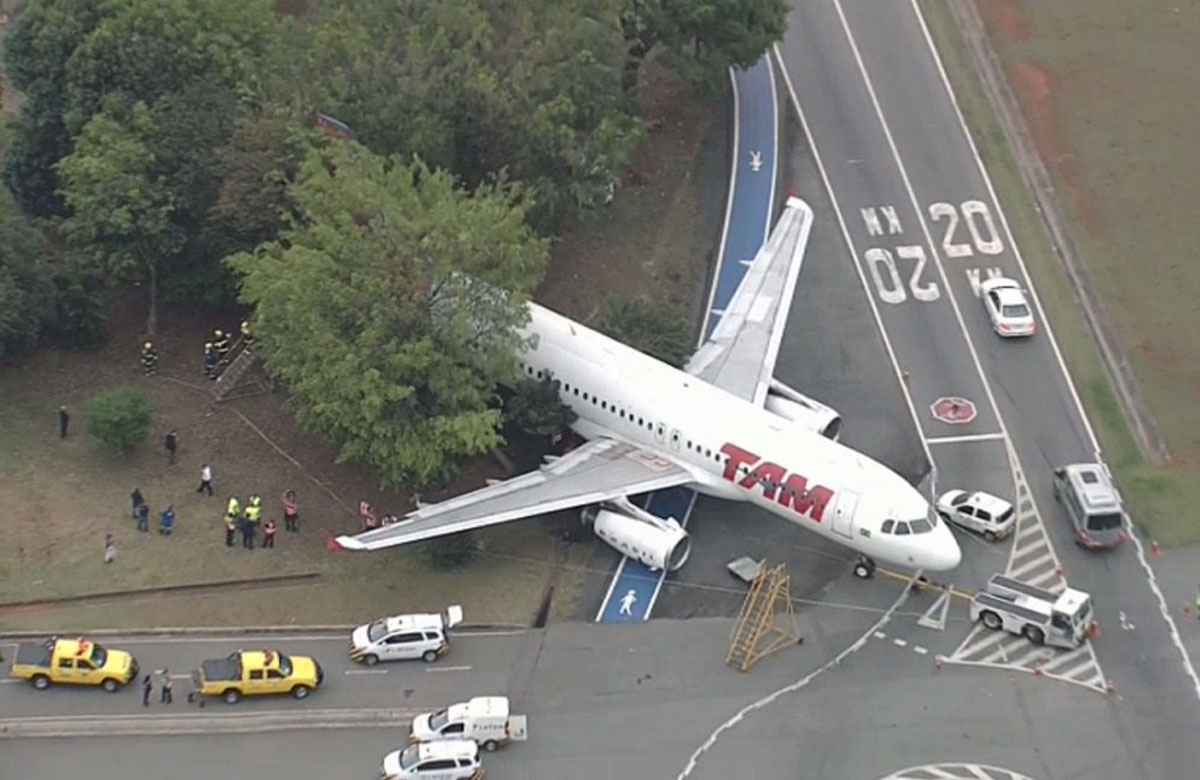