Date 21 January
Aircraft Aero Modifications AMI DC-3-65TP
Location SE of Kidron-Stoltzfus Airfield, Ohio, USA
Fatalities 2
Description The aircraft impacted terrain shortly after departure. A witness noticed the aircraft lift off about a third of the way down the runway. Soon after becoming airborne, white smoke was noticed coming out of the left engine. The plane began to veer to the left and did not climb normally. The plane struck power lines and trees before impacting the ground and came to rest about 180 metres from the end of the runway. The plane sustained substantial damage. The main wreckage was upright and oriented on a northwesterly heading, with the fuselage separated forward of the wings. The left wing was broken aft and upward, and the inboard leading edge of the right wing was crushed aft. The left engine was broken aft and outboard of the wing’s leading edge. The right engine was broken downward at the nacelle. The nose of the plane was located forward and left of the main wreckage. Both the captain and first officer were killed. (image above)

Date 22 January
Aircraft Boeing 737-8LJ (WL)
Location Khanty-Mansiysk International Airport (HMA), Russia
Fatalities Nil
Description The aircraft made an emergency landing after a passenger attempted to hijack the plane. The flight had departed Surgut at 09:55 UTC. While en route to Moscow at FL340, a passenger claiming to be armed ordered the flight crew to divert to Afghanistan. At 10:22 UTC the pilots squawked 7600 (lost communications) on their transponder. The aircraft landed safely. After landing, security forces stormed the plane and detained the man. He was in a state of intoxication; he was not armed.

Date 28 January
Aircraft ATR 72-500 (72-212A)
Location Palma de Mallorca Airport (PMI), Spain
Fatalities Nil
Description The aircraft suffered a partial runway excursion during landing rollout at Palma de Mallorca Airport, Spain. The aircraft departed the right side of the runway and hit one of the runway edge lights. The landing could be completed without further incident and the aircraft rolled on its own to the apron. The aircraft sustained significant damage to the right side of the fuselage that affected the airframe, the hydraulic system and the landing gear.

Date 29 January
Aircraft Beechcraft B200 Super King Air
Location 32 km (20 mls) W off Kake, Alaska, USA
Fatalities 3
Description The aircraft with three occupants onboard was reported missing west of Kake, Alaska. Weather in the area was reported as light rain with overcast skies, 10 miles visibility, 7 mph winds and an air temperature of 2°C. Debris that appears to be from the flight was located in the search area on January 30, but no additional debris was found that night or the next day. The US Coast Guard’s search was suspended on January 31 at 17:30 after 63 hours spanning 240 square nautical miles.

Date 30 January
Aircraft Beechcraft Super King Air
Location ca 30 km from Whatì/Lac La Martre Airport, NT (YLE), Canada
Fatalities 2
Description The aircraft was reported missing on a flight from Yellowknife to Whatì in Canada. There were two crew members on board. Search and rescue teams arrived at the wreckage on 31 January. Neither of the two pilots on board survived. Weather at the site was poor with a temperature of -23°C with blowing snow.

Date 8 February
Aircraft Convair C-131B Samaritan
Location 21 km (13.1 mls) E off Bay Harbor Islands, FL, USA
Fatalities 1
Description The cargo plane ditched into the Atlantic Ocean off Miami, Florida. The aircraft departed Nassau, Bahamas at 11:13 hours local time on a cargo flight and climbed to the en route altitude of 4300 feet. At 12:03 hours, at a distance of 95 km from Opa-Locka, the aircraft began to lose altitude. The pilot declared an emergency and attempted a water landing. The aircraft hit the sea about 12:15, 21 km offshore and 37 km from Opa-Locka and broke up. The left-hand wing separated from the fuselage. One person was rescued, by a US Coast Guard helicopter. The Coast Guard conducted maritime and aerial searches for the missing pilot for approximately 21 hours and in an area of 364 square nautical miles. The search was then suspended. (image above) 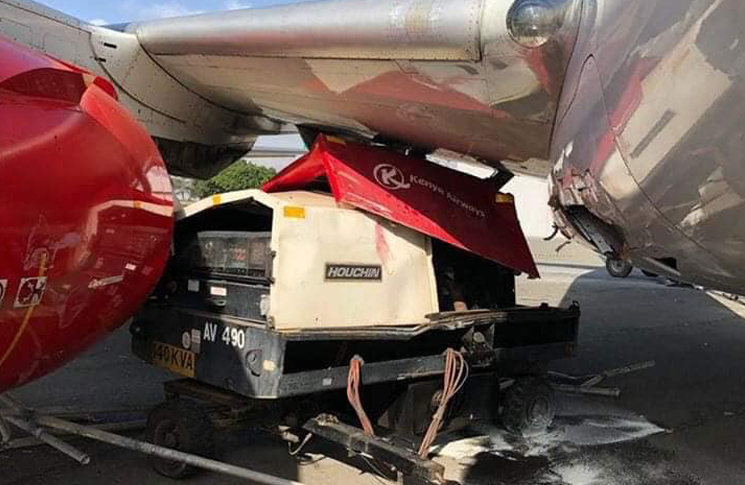 Date 9 February
Aircraft Embraer ERJ-190AR (ERJ-190-100 IGW)
Location Nairobi-Jomo Kenyatta International Airport (NBO), Kenya
Fatalities Nil
Description The aircraft was being serviced on the apron of the airport. Chocks were placed at the wheels. As the engines were powered, the aircraft jumped the chocks. It collided with another parked Kenya Airways Embraer ERJ-190AR (5Y-FFF). Both aircraft suffered serious damage. (image above)

Date 23 February
Aircraft Boeing 767-375ER (BCF) (WL)
Location Trinity Bay, near Anahuac, Texas, USA
Fatalities 3
Description The aircraft was on a cargo flight between Miami International Airport, Florida and Houston-George Bush Intercontinental Airport, Texas. The cruising altitude of FL400 was reached after 20 minutes. Descent towards Houston was commenced at 18:07 UTC. About 18:37 UTC (12:37 local time) the aircraft entered a rapid rate of descent and impacted the water of Trinity Bay, approximately 60 km ESE of the destination airport. All three crew members were killed.